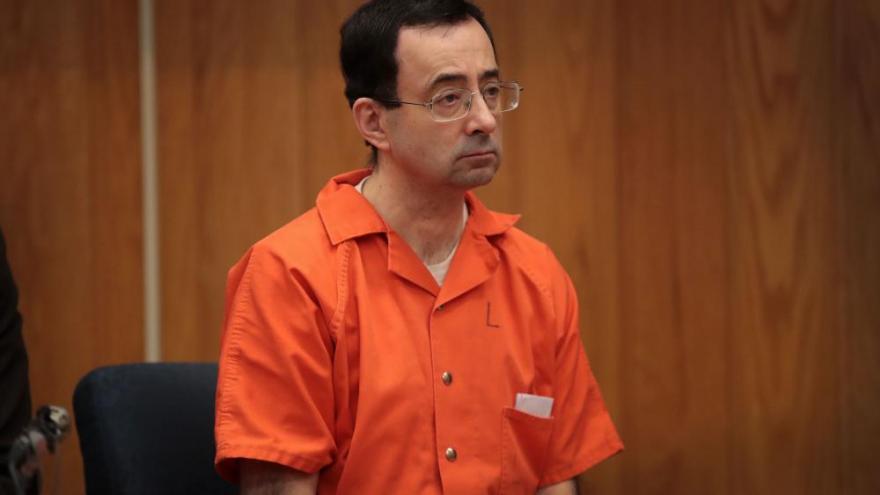 A judge has ordered that Larry Nassar's prison funds be turned over to victim restitution. Nassar is seen here in Eaton County Circuit Court on February 5, 2018 in Charlotte, Michigan.

(CNN) -- A judge has ordered that Larry Nassar's prison funds be turned over to the government and put toward victim restitution, according to court documents filed Thursday.

US District Judge Janet T. Neff granted a motion by prosecutors to have Nassar's funds, which totaled $2,041.57 as of last month, applied to his outstanding restitution debts.

Prosecutors said that at one point, Nassar's prison account had a balance of $12,825, including stimulus checks for $600 and $1400, respectively issued in January and March of this year, the order states. It's unclear where the additional money of more than $10,000 went.

CNN has previously reported that despite having money in his account, Nassar has only paid $300 toward the more than $62,000 he was ordered to pay in restitution, according to a motion filed last month by prosecutors. He was ordered to pay $57,488.52 in restitution to five victims in a child pornography case, along with an extra $5,000 for a special assessment fee pursuant to the Justice for Victims of Trafficking Act of 2015, the motion read.

Neff also ordered that any remaining funds should be applied to the $5000 Justice for Victims of Trafficking Act of 2015 special assessment fee, the order states.

The Bureau of Prisons told CNN in July that it "is committed to taking all appropriate steps to help ensure that inmates meet their financial obligations, including court-ordered payments to compensate victims. As part of that process, it regularly analyzes and monitors inmate accounts. BOP also partners with other law enforcement agencies and regularly notifies relevant authorities -- such as the US Marshals and US Attorneys' offices -- when it identifies funds that are appropriately subject to seizure. BOP took such steps here. As reflected on the public docket, the government has asked the court to order that all funds in an inmate's account be turned over to satisfy a restitution judgment. The BOP will continue to examine its policies in an effort to do all it can to help ensure that inmates meet their fundamental financial obligations."

Attorneys who represented many of Nassar's victims were appalled by the news.

"The notion that anybody in the Justice Department would let this happen is just revolting," said John Manly, a lawyer for many of Nassar's victims, including Simone Biles. "The timing of this, with my client being unable to compete because of what happened to her, couldn't be more upsetting. ... They're allowing the worst child predator in American history to spend thousands of dollars on himself and pay $8 a month to his victims. Something is completely broken and needs to be fixed."

Alex E. Cunny, one of the attorneys who represents more than 150 of the girls and women who say Nassar sexually assaulted them, told CNN that it was another "shocking revelation" on the part of the Justice Department.

"The idea that Nassar is spending money on himself and not the women he has abused is unacceptable, especially, coming off the heels of the Inspector General's report on how the FBI handled the initial investigation is another shocking revelation. How many ways will the Justice Department let the victims down?" Cunny said.

The disgraced former USA Gymnastics doctor was sentenced on December 7, 2017, to 60 years in federal prison on child pornography charges.

In addition, he was sentenced on January 24, 2018, to up to 175 years in Michigan state prison after pleading guilty to seven counts of criminal sexual conduct. At the sentencing, 156 victims spoke, recounting similar stories of how they went to Nassar to receive treatment for sports injuries only to be sexually assaulted and told it was a form of treatment.

He is currently serving his federal sentence in the US Penitentiary in Sumterville, Florida.