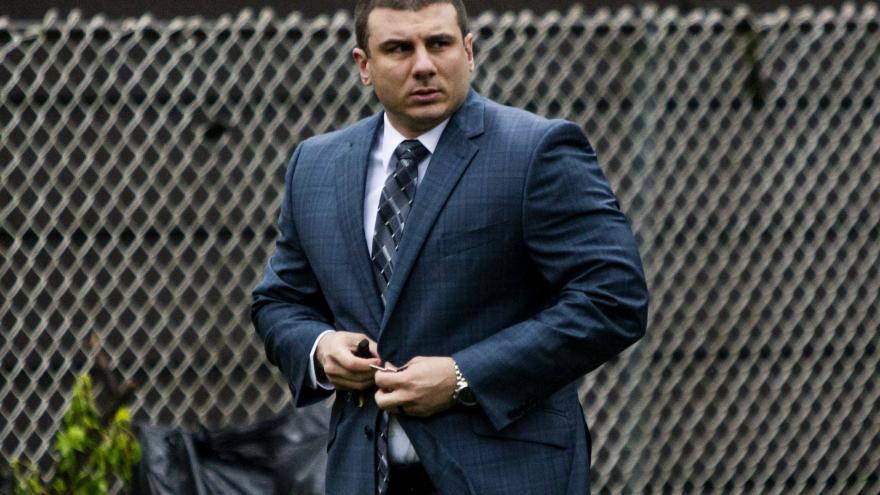 Maldonado's much-awaited recommendation marks the latest internal step in a process that will resolve Pantaleo's future with the NYPD. Officials with the Civilian Complaint Review Board, the city agency charged with police oversight, and Pantaleo's attorney now have about two weeks to draft responses. O'Neill gets the final say.

Pantaleo has been suspended pending the commissioner's decision, the NYPD spokesman said.

Maldonado's recommendation results from a spring disciplinary trial in which Pantaleo declined to take the stand to explain his role in Garner's death in July 2014. The death led to anti-police demonstrations throughout the nation.

A key question in the case was whether Pantaleo used a chokehold, which is banned by the NYPD, against Garner. The officer denies he used the maneuver and had been on desk duty since Garner's death. Maldonado ruled that a chokehold triggered a series of event's that culminated with Garner's death, according to a source who saw the judge's report.

De Blasio on Friday called Maldonado's decision "a step towards justice and accountability."

"We saw a process that was actually fair and impartial, and I hope that this will now bring the Garner family a sense of closure and the beginning of some peace," he said at a news conference.

Asked whether he agreed that Pantaleo should be fired, de Blasio said only, "Again, what I am talking about today is a fair and impartial process has occurred."

De Blasio during the debate had said of the city's process, "For the first time, we are not waiting on the federal Justice Department, which told the city of New York that we could not proceed because the Justice Department was pursuing their prosecution."

Garner's widow: Officer 'should have been fired right on the spot'

Still, Garner's widow on Friday called the handling of the case by de Blasio and city officials "very disheartening and very callous."

"They're just passing the buck. One is blaming the other -- whose responsibility is it, you know, who has the power to do this or do that," Esaw Garner Snipes told CNN before Maldonado's decision was publicly revealed.

After the recommendation was announced, Garner's daughter, Emerald Snipes Garner, said, "We have waited five years, and the time is now for justice."

Maldonado's decision confirms what the Civilian Complaint Review Board, or CCRB, has long maintained: "Officer Daniel Pantaleo committed misconduct ... and his actions caused the death of Eric Garner," the panel's chairman said.

Evidence presented by CCRB prosecutors was "more than sufficient to prove that Pantaleo is unfit to serve," Chairman Fred Davie said in the statement, which called for O'Neill to fire the officer.

"If it's allowed to stand, it will paralyze the NYPD for years to come," Police Benevolent Association President Patrick Lynch tweeted.

Pantaleo's attorney, Stuart London, told reporters his firm is "going full steam ahead" to craft a response that will point out "discrepancies" in the city's decision.

"He wants to fight going forward," London said of his client. "We will do that."

Pantaleo was suspended, effective Friday, said the NYPD spokesman, Phillip Walzak, who called the move "longstanding practice" following a recommendation to terminate an officer. The police commissioner will get a complete report after a comment period for the defense and CCRB, he said.

"All of New York City understandably seeks closure to this difficult chapter in our City's history," Walzak said in a statement, declining further comment.

Pantaleo's job has been in jeopardy since he was caught on video applying what some allege was a chokehold on Garner. The 43-year-old father of six died on July 17, 2014, after police tried to arrest him for allegedly selling loose cigarettes illegally on Staten Island, a crime for which he previously had been arrested.

Judge rules that use of chokehold was reckless, according to source

As part of the ruling, Maldonado reviewed footage of Garner's arrest in fine detail. She honed in on the moments after Pantaleo took down Garner, according to a source who saw the report. Pantaleo is seen on Garner's back with one arm wrapped around his neck when he brings his other arm around and clasps them together to lock in the hold.

At the departmental trial, lawyers for Pantaleo argued that Garner's neck was in the crook of his elbow. There was no pressure on his windpipe but rather on the sides of his neck, which constituted a sleeper hold, they argued. But Maldonado ruled that while on top of Garner, the officer could have used a tactic other than the banned chokehold, according to the source who saw the report.

Maldonado ruled that the chokehold led to a cascade of events that ended with Garner's death, according to the source.

Despite her ruling on the use of a chokehold, Maldonado found that he was not guilty of restricting Garner's breathing. The second charge had more to do with intent, meaning there needed to be clear intent to prevent someone from breathing in order for the charge to stick. But since Pantaleo made other attempts to subdue Garner with NYPD-approved tactics before the chokehold, such as an arm bar, Maldonado ruled that it wasn't Pantaleo's goal to cut Garner's breathing, according to the source.

Garner's friend, Ramsey Orta, recorded the confrontation on his cell phone as it quickly escalated.

In the video, Pantaleo can be seen wrapping one arm around Garner's shoulder and the other around his neck before jerking him back and pulling him to the ground. As Pantaleo forces Garner's head into the sidewalk, Garner can be heard saying, "I can't breathe. I can't breathe."

Federal investigators began examining the circumstances of Garner's death in 2014, after a grand jury in New York declined to indict the Staten Island officer. The city settled with Garner's estate in 2015 for $5.9 million.