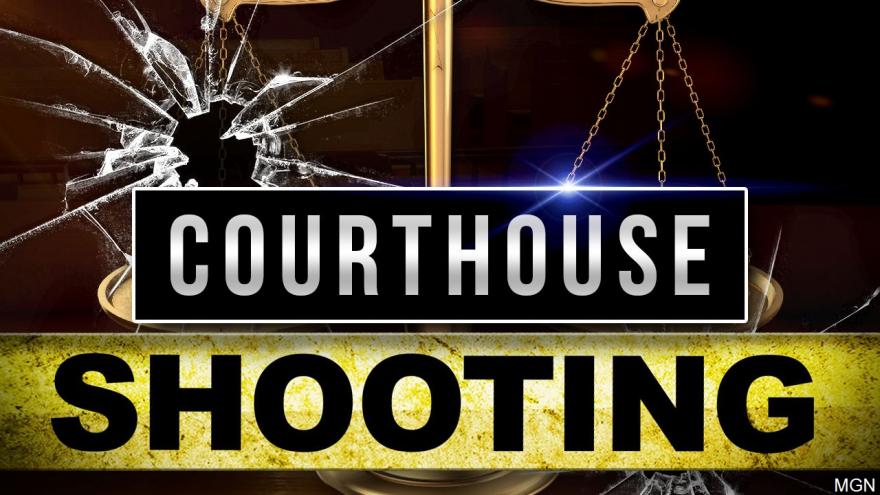 Salt Lake City, Utah (KSL/CNN) -- A federal judge released courtroom video Monday of the fatal shooting of a defendant who attacked a witness with a pen during a 2014 racketeering trial. 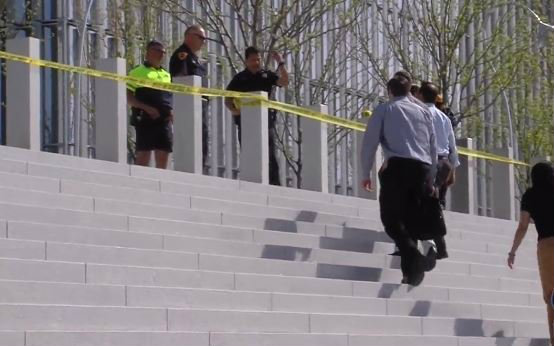 The 24 seconds of video shows Siale Angilau, a member of the Tongan Crips gang, standing up at the defense table, grabbing a pen or pencil, then running to the witness stand and hurdling himself over it.

"Whoa, whoa, whoa," someone yells as the witness, another gang member who is shackled and chained, manages to retreat into a corner of the courtroom.

The video shows the deputy U.S. marshal, identified in court documents only as Jane Doe, unholster her gun and fire four quick shots at Angilau while backing up.

"Drop the pen. Drop the pen out of your hand," an officer yells at Angilau, who can't be seen behind the witness stand.

The video is pixelated to obscure the judge, officers and others in the courtroom.

Along with making the video public, U.S. District Judge John Dowdell dismissed a lawsuit brought by the Angilau family claiming excessive force in the shooting.

"The video completely contradicts plaintiffs’ argument that Angilau stopped posing a danger within less than one second of launching himself over the witness stand while making a stabbing motion with a pen in hand," Dowdell wrote.

"Angilau was in custody, but he essentially had escaped custodial control for those seconds during which he was executing his plan to assault the witness," the judge wrote. "His attack was stopped by the shots that Jane Doe rapidly fired, in less than one and one-half seconds."

Authorities have identified the U.S. marshal only as Jane Doe. An FBI investigation found the shooting was legally justified.

Robert Sykes, the Angilau family's attorney, said a jury should see the video and make a decision about whether the marshal used appropriate force. He said the witness got out of the way and wasn’t in danger by the time the shots were fired.

"Those last three shots were all after he's been shot once down on the ground in the back, and that's the problem I have with this case. There was no necessity to use force," he said.

Sykes said he's glad the video was made public, but the Angilau family wants justice. He said it is up to the them to decide if they want to appeal the judge’s ruling dismissing their lawsuit.

Magistrate Judge Paul Cleary ordered the release of a pixelated version of the video obscuring faces of law enforcement officers and others in November, but the Department of Justice objected. Dowdell sided with Cleary's order Friday.

Angilau's family filed a wrongful death lawsuit, claiming the shooting was "particularly unreasonable, reckless and constitutionally excessive." The family had been allowed to view the video, but not to release it.

The media took no position on whether the shooting was justified but claimed the video is a public record that documents a newsworthy event in a public courtroom.

In July 2016, the Utah Headliners Chapter of the Society of Professional Journalists and a coalition of Utah media, including the Deseret News, KSL, Salt Lake Tribune, Fox 13 and Associated Press, filed requests under the Freedom of Information Act seeking the video with the assistance of attorneys from Parr Brown Gee & Loveless.

The Utah Headliners and the media outlets named in the Freedom of Information Act request filed a motion in court in December 2016, arguing that if video of the shooting is admitted as evidence in the wrongful death lawsuit, it should be released to the public.

"We applaud Magistrate Judge Paul Cleary's decision in November finding the courtroom security video to be a matter of public record, and U.S. District Judge John Dowdell's order on Friday upholding that ruling," McKenzie Romero, the president of Utah Headliners and a Deseret News reporter, said in a statement.