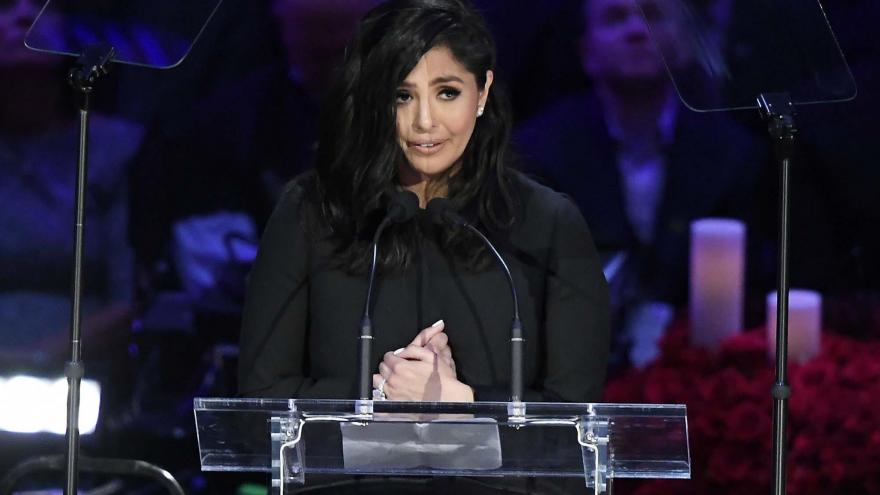 Kobe Bryant's widow, Vanessa Bryant, seen here in February 2020 in Los Angeles, California, will not have to undergo a psychiatric evaluation in her lawsuit against Los Angeles County over leaked photos of the NBA star's fatal helicopter crash, a judge has ruled.

(CNN) -- Kobe Bryant's widow, Vanessa Bryant, will not have to undergo a psychiatric evaluation in her lawsuit against Los Angeles County over leaked photos of the NBA star's fatal helicopter crash, a judge has ruled.

Bryant's lawsuit claims photos of the January 2020 helicopter crash that killed her husband, daughter and seven others were shared by county fire and sheriff's department employees in settings irrelevant to the investigation, including a bar.

LA County had argued independent medical examinations were necessary to determine whether the emotional distress suffered by Bryant and others was caused by the leak of the photos or the helicopter crash itself.

Skip Miller, partner at the Miller Barondess law firm and outside counsel for LA County, said, "The fact remains that no crash site photos taken by first responders have ever been publicly disseminated, as Ms. Bryant confirmed in her deposition. We totally sympathize with the enormous loss she has suffered. But as a legal matter, we don't believe she could be harmed by something that didn't occur."

According to court filings, LA County had argued that a "central tenet" of its defense would be that the "severe emotional and mental injuries were not caused by any conduct of Defendants, but rather by the tragic helicopter crash and resulting deaths of their loved ones."

Arguing against the examinations, attorneys for Bryant and the other plaintiffs said a "complaint that merely claims damages for emotional distress does not place a party's mental condition 'in controversy.'" They added the county should work to evaluate emotional stress by "less intrusive means."

Earlier this year, family members of those killed in the crash settled a wrongful death lawsuit with the company that owned and operated the helicopter.