Judge says CDC doesn't have authority to issue an eviction moratorium. It's unclear what happens next 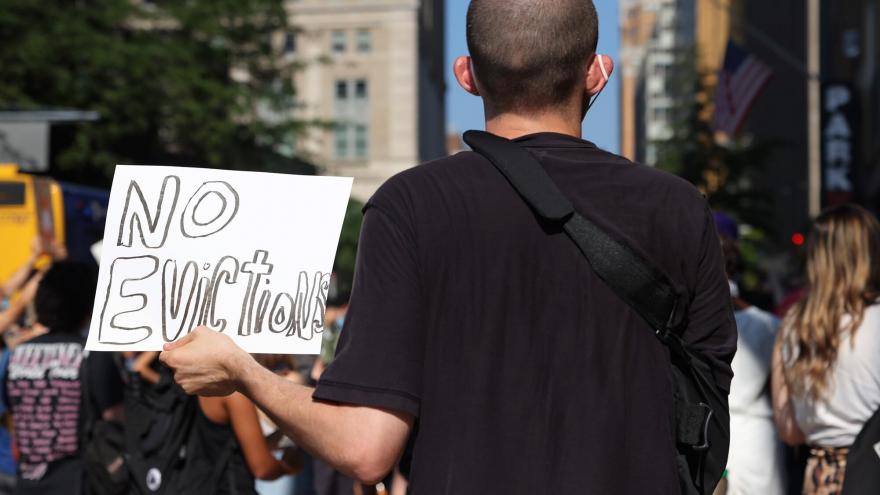 A federal judge in Washington on May 5 declared that the US Centers for Disease Control and Prevention's moratorium on eviction for non-payment must be set aside.

(CNN) -- A federal judge in Washington on Wednesday declared that the US Centers for Disease Control and Prevention's moratorium on eviction -- a key element of the federal government's efforts to aid those hit hardest by the Covid pandemic and its economic effects -- must be set aside.

The ruling from Judge Dabney Friedrich says the Public Health Service Act does not give CDC the legal authority to impose the moratorium, which was first issued last year.

The current federal eviction moratorium was scheduled to end on June 30. It is unclear what will happen now. The Justice Department, which is appealing a similar ruling in Texas, filed Wednesday to appeal Friedrich's decision and the judge issued a temporary stay of her ruling.

The CDC referred an inquiry for comment to the Justice Department.

"The Court recognizes that the Covid-19 pandemic is a serious public health crisis that has presented unprecedented challenges for public health officials and the nation as a whole. The pandemic has triggered difficult policy decisions that have had enormous real-world consequences. The nationwide eviction moratorium is one such decision," Friedrich wrote in her opinion.

"It is the role of the political branches, and not the courts, to assess the merits of policy measures designed to combat the spread of disease, even during a global pandemic," she continued. "The question for the Court is a narrow one: Does the Public Health Service Act grant the CDC the legal authority to impose a nationwide eviction moratorium? It does not."

There have been several legal challenges to the CDC eviction moratorium. Some courts have said that the CDC has the authority to issue the order and rejected efforts to stop the ban, while others have ruled in favor of landlords. A federal judge in Ohio ruled that the CDC had overstepped its authority in issuing a nationwide eviction ban.

Housing experts said they are still reviewing the decision and its implications, noting there are now conflicting rulings at the district court level, all of which have had limited impact.

"The DOJ should immediately appeal the flawed ruling and the Biden administration should continue to vigorously defend and enforce the moratorium, at least until emergency rental assistance provided by Congress reaches the renters who need it to remain stably housed," she said Wednesday.

But a group representing landlords praised the ruling.

"Today's decision is just the latest in a line of lower courts opinions throwing out CDC's brazen power grab as being well outside of the agency's authority," said Caleb Kruckenberg, litigation counsel for the New Civil Liberties Alliance. "Having now agreed to hear the case on an expedited basis, the Eleventh Circuit is poised to be the first federal appeals court to strike down the moratorium and protect housing providers across the country who have been forced to provide unlimited free housing to their tenants."

The CDC's moratorium stems from an executive action signed by former President Donald Trump last August shortly after a previous moratorium on evictions lapsed, as Congress proved unable to come to a deal to extend the provision.

The original ban, which lawmakers approved as part of a massive coronavirus relief bill in March 2020, covered mortgages backed by federal funds. The nonprofit Urban Institute has estimated that moratorium covered just over 12 million households.

The following month, the CDC moved to temporarily halt evictions for a broader group of struggling Americans. The White House said the order apply to those who qualified for direct stimulus payments in the March relief bill, which covered individuals who earn less than $99,000 a year.

People also have to prove that they've made efforts to get government assistance for their rental payments, declare that their inability to pay is because of financial hardship due to Covid and that they would likely become homeless if they were evicted.

In a conference call with reporters at the time, administration officials pointed to the CDC director's authority "to take measures that are reasonably necessary to mitigate the spread of communicable disease," when asked why the move would come from a health agency.

"Congress has delegated broad authority to (the Department of Health and Human Services), the Surgeon General and CDC, to take reasonable efforts to combat the spread of communicable diseases, and frankly I think it makes sense for those authorities abroad because we don't know for any given situation or scenario what steps will be needed to stop the spread," an administration official told reporters. "The home has been sort of the focal point of people social distancing and building sort of a safe space for themselves over the past few months."

The official also said people "may end up in overcrowded congregated living facilities or homeless shelters, and that is a potential recipe for a big spread of Covid-19."

In March, the CDC extended the ban to June 30, the third time the deadline had been pushed back.

An estimated 10.7 million adults living in rental housing -- 15% of adult renters -- were not caught up on rent, according to a Center on Budget & Policy Priorities' report on Census data collected in the last half of March.

While federal and local eviction moratoriums have helped keep people in their homes during the pandemic, back rent continued to pile up. The nation's renters owed an estimated $57 billion in back rent in January, according to a Moody's Analytics report.

Congress included $25 billion for rental assistance in its December stimulus package and provided another $27 billion in the American Rescue Plan Act that passed in March.

The pot of money from December is making its way into renters' hands now and the money approved in March will follow after Treasury releases new guidance, which is expected in coming weeks.

States, cities and counties are either ramping up existing rental assistance programs or launching new ones to get the unprecedented volume of funds out the door. There are currently more than 200 of these programs that are open and accepting applications, according to the National Low Income Housing Coalition.

Tenants must meet an income requirement, show they've lost income during the pandemic and demonstrate a risk of homelessness in order to qualify for the money.