Judge shuts out public from Mulvaney hearing on impeachment subpoena 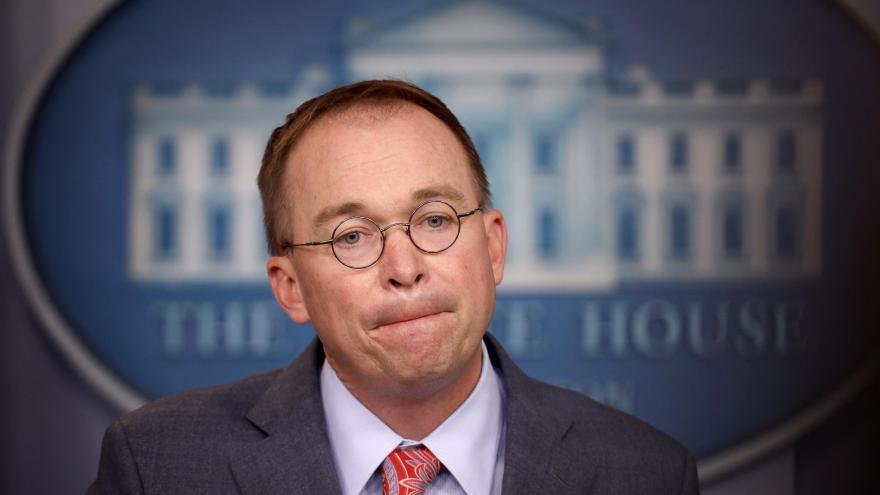 Court security told three reporters from CNN, Bloomberg and The Washington Post to leave the DC federal courthouse minutes before the 5 p.m. ET start time for the hearing. The hearing, which was held over the phone, would not be open to the public and the judge was not in his chambers, according to court security guards who spoke to the judge's chambers Monday.

For a courthouse that has hosted dozens of major hearings about the President over the past two years, the judge's move is a confounding approach to a case with such noteworthy players and significance in the House's impeachment inquiry into President Donald Trump -- a case that, in its essence, asks whether the White House chief of staff must speak publicly under oath.

About 80 minutes after the hearing began Monday, Mulvaney wrote in a new filing to the court that he now plans to file his own lawsuit over his House subpoena, acknowledging developments in the hearing without giving more explanation of what happened. He said, though, that he believes his case is still related to another impeachment witness who wants the court's intervention -- potentially keeping it before the same federal judge, Richard Leon of the DC District Court.

Mulvaney will be suing House members and committees over whether he must testify. The lawsuit originated with another recalcitrant impeachment witness, Charles Kupperman, a former White House national security official who asked the court to decide whether he must testify or follow the White House's assertion that he's immune. Mulvaney did not appear for his scheduled House testimony Friday despite having received the subpoena, instead saying late Friday that he wanted a similar determination from the judge.

According to a transcript of the hearing held over the phone that was released Monday night, Mulvaney's attorney, Chris Muha, outlined to the judge why the acting White House chief of staff has spoken up in court since avoiding his subpoena.

In short, Mulvaney is concerned about how the House might retaliate against him, and how the result in Kupperman's lawsuit would also affect him, the lawyer said.

"He is under a current subpoena that threatens him with the possibility of contempt or other unspecified adverse action. The decision as to Mr. Kupperman can directly affect whether the House moves on that step," Muha said.

Kupperman's attorney, who also represents former national security adviser John Bolton, and the lawyers for the House have opposed Mulvaney joining their case. Kupperman's attorney said his client is "neutral" on whether he wants to testify to the House, while Mulvaney doesn't want to testify, according to the hearing transcript.

The Justice Department didn't take a position on what to do with Mulvaney's complaint.

Leon had said he would listen to arguments over the phone, writing earlier Monday: "Because of the time-sensitive nature of the motion that is in dispute, the conference call is being held on a federal holiday, and the courthouse is closed."

The judge had previously vowed to decide the case quickly because of its significance for the country, but he set a timeline that may not resolve whether Mulvaney or Kupperman must testify until after the House wraps its impeachment inquiry.

CNN and eight other news organizations wrote to Leon on Monday asking for the hearing to be accessible to the public.

"The need for contemporaneous public access to this proceeding could not be greater, given that this matter involves momentous constitutional questions regarding separation of powers and impeachment," lawyers for the media organizations wrote on Monday.

According to the filing, those organizations that requested access were: CNN, The Associated Press, The New York Times, Dow Jones (which owns the Wall Street Journal), Politico, Reuters, NBC, CBS and The Washington Post.

Leon had said he would speak to the attorneys involved by telephone from his judicial chambers. The hearing occurred on a day the Washington courthouse was technically closed for the Veterans Day holiday.

"The Court cannot accommodate movants' request for live access to the telephonic conference. But the Court expects a transcript of the proceeding to become available shortly after it ends, and movants may obtain a copy," Leon added in an order.

Leon noted that the hearing is not sealed -- a special shield the court can use to keep matters confidential.

Later Monday evening, Leon set a hearing for Tuesday afternoon, where the parties will address whether the two cases should be related and the plan for the schedule.