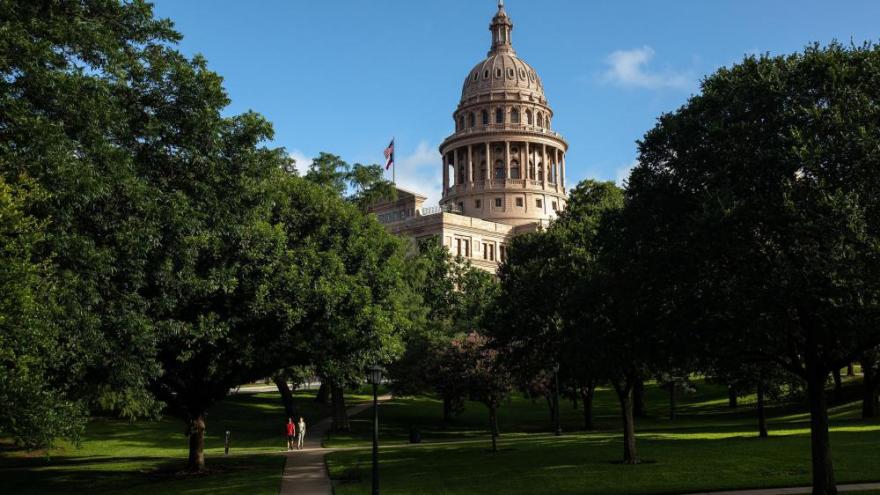 Democrats who left Texas in an attempt to stop the passage of restrictive voting bills can now return home without fear of being arrested, after a judge issued a temporary restraining order, and pictured, the Texas State Capitol on July 8.

(CNN) -- Texas Democrats who left the state last month in an attempt to stop the passage of restrictive voting bills can now return home to continue their protest without fear of being arrested, after a judge on Monday issued a temporary restraining order.

The order came at the request of 19 Texas House Democrats, members of a group of Democrats who left the state to prevent their Republican counterparts from having the quorum needed to carry on legislative business during a special session called by Abbott. Their aim was to prevent their Republican counterparts from passing new restrictive voting laws. Their move killed the legislation during the initial special session, but the governor called another session that began this past weekend.

The 19 Democrats argued in a petition that "a fundamental principle of our constitutional system of government is that the State's power to arrest and incarcerate cannot be used for political purposes."

Urrutia wrote that the court finds, based on facts and testimony in the Democrats' petition and affidavits, that Abbott and Phelan "have erroneously interpreted Texas Law and legislative rules to permit the detention, confinement, or other restriction of members of the Texas House of Representatives within the State of Texas in response to a call for quorum."

A hearing is scheduled for August 20 to give Abbott and Phelan a chance to argue "why a temporary injunction should not be issued against them," the order said. If no action to extend the order is taken, it will expire in two weeks.

In response to the order, Abbott press secretary Renae Eze told CNN, "The ruling by the Travis County judge is contrary to the Texas Constitution and violates the separation of powers between the different branches of government. We are confident that this overstep will be overturned. Texas Democrats need to stop the charades and get back to work."

After more than 50 Democrats fled the state to deny quorum for the first called special session in July, House Republicans voted to send law enforcement to track down absent members and compel them to return. However, Texas law enforcement does not have jurisdiction in Washington, DC, where the majority of the quorum-busters stayed for the duration of that special session. Only one civil arrest warrant was actually signed by the state House speaker, for Texas state Rep. Phillip Cortez, who briefly returned to the state House floor during the quorum break but rejoined the other Democrats in Washington days later. That warrant expired with the end of the first special session.

The second special session called by Abbott began on Saturday, but the Texas House did not have enough members to reach a quorum, which means no legislative business can be done. On Monday, the House voted to institute a "call of the House," which means the doors to the chambers are locked and members need written permission from the speaker to leave. A "call of the House" is also required before members could be compelled in any way to return to the state Capitol. At least 26 Texas Democrats have said they will remain in Washington through August to push congressional lawmakers to pass federal voting protections. Others have left the nation's capital but did not return to the Texas House for the new special session.

"The men and women of the Texas House, many of whom are Black and Brown Democrats, are not animals or property to be corralled by law enforcement and cabined against our will. It is morally wrong to believe otherwise. We will not allow our democracy to devolve into dictatorship; we will use every tool necessary to defend the Constitution," Texas state Rep. Trey Martinez Fischer said in a statement issued by the attorney for the 19 Democrats.

"Angry Republican threats to dispatch troopers to arrest, cuff, shackle, drag in, and cabin duly-elected lawmakers isn't just meant to chill our speech and impair our ability to represent our districts, it has left our families, friends, and neighbors anxious for our wellbeing and safety," state Rep. Gina Hinojosa said in the statement.

CNN has reached out to the office of Texas Speaker Phelan for comment.