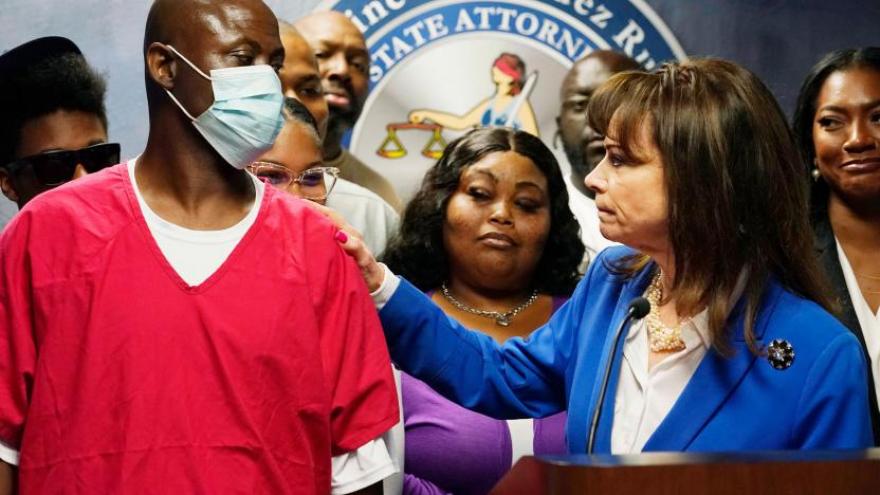 State Attorney Katherine Fernandez Rundle looks at Thomas Raynard James after announcing a motion to vacate his 1991 murder conviction on April 27, 2022, in Miami.

(CNN) -- A man who served 32 years in prison for murder walked free Wednesday when a Florida judge vacated his conviction and sentence after prosecutors found he never committed the crime.

"We have determined that Thomas Raynard James is actually innocent," Assistant State Attorney Christine Zahralban told the court Wednesday. James' lifetime prison sentence was then vacated by Judge Miguel M de la O in the presence of his mother and family.

"This has been a long time coming," James told reporters after the exoneration. He said he plans to start trying to find a job and enjoy his first meal with his family. As he prepared to leave the courthouse, James said: "Now, let me go enjoy life."

James, now 55, was arrested in 1990 and convicted in 1991 for the first-degree murder of Francis McKinnon, according to court documents. The case rested largely on the positive identification of James from one eyewitness. He was sentenced to life in prison with a 25-year minimum and additional sentencing for armed robbery and aggravated assault with a firearm as well as armed burglary of an occupied dwelling with a firearm.

Charles McKinnon, one of the victim's sons, spoke in front of the court Wednesday, saying, "Mr. James, I don't want to see you in jail if you're innocent." But, he added, the family was not fully convinced and could not support the state's position.

James had filed more than 10 post-conviction motions and appeals and was denied each time, according to a motion to vacate his convictions and sentences filed by Rundle.

In June 2021 the SAO Justice Project reviewed more than 20,000 pages of records and conducted their own interviews of witnesses under oath, some of whom were prison inmates. They examined DNA, firearms, and crime scene evidence, and found there was no physical evidence tying anyone to the crime.

In 2019, Walton, now 79, told investigators with the Innocence Project of Florida that she believed she made a mistake in her identification of James.

The investigation concluded an "unfortunate case of mistaken identity," Rundle said. "Eyewitness testimony can be very vulnerable, especially in those days."

James, in a sworn statement to the SAO Justice Project in January of 2022, said he has never shot anyone and has never been to the apartment complex where the crime occurred.

James also agreed to take a polygraph examination, where he passed questions asking if he was physically in the apartment when McKinnon was shot, whether he shot McKinnon, and if he was involved in the robbery/murder in any way.

Charles McKinnon told reporters after the court session that he wants to make sure his father still gets justice.

"We haven't gotten enough information as family members," he said. "I can't say that I'm in total disagreement, but I don't think I know enough to say I support it either."

Rundle said she was proud of her Justice Project team for their intensive work on James' case.

CNN's reached out to legal representation for James, but did not immediately receive a response.