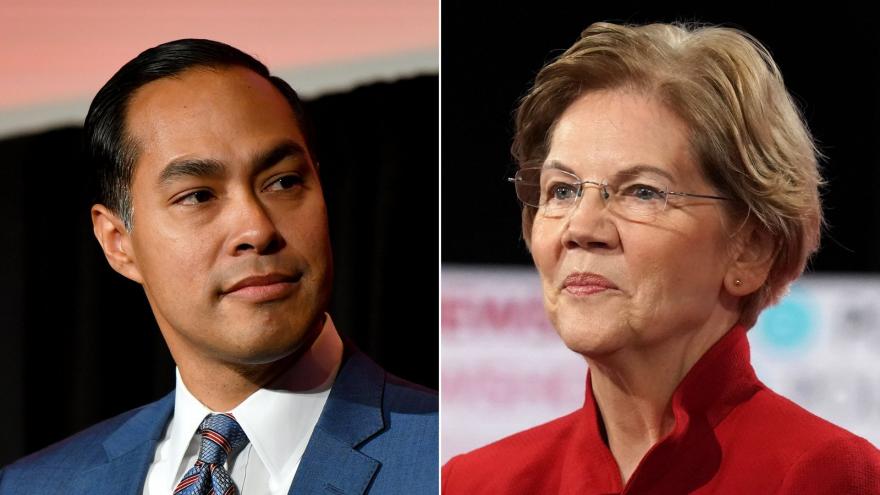 (CNN) -- Former 2020 candidate Julián Castro endorsed Elizabeth Warren on Monday morning, announcing just days after ending his own bid for the White House that he believes Warren is the "one candidate I see who's unafraid to fight like hell to make sure America's promise will be there for everyone."

The news marks one of the Massachusetts senator's most high-profile endorsements to date, coming just weeks ahead of the Iowa caucuses and at a moment when her political momentum has slowed. Castro, who served as secretary of Housing and Urban Development under President Barack Obama and was formerly mayor of San Antonio, Texas, will appear with Warren at a campaign rally in Brooklyn, New York, Tuesday night, a campaign aide told CNN.

Warren, Castro said in an endorsement video, "will make sure that no matter where you live in America or where your family came from in the world, you have a path to opportunity too. That's why I'm proud to endorse Elizabeth Warren for President."

Castro was the lone Latino candidate for president in 2020. He was outspoken on issues related to immigration, including fighting for decriminalizing illegal border crossings -- and advocated for more diversity in politics. He spoke out against the current primary system that has voters in states like Iowa and New Hampshire vote first, saying those states did not fully represent the diversity of the rest of the country.

Castro's decision to formally back Warren is in many ways not surprising. The two shared a publicly complimentary relationship as 2020 rivals, publicly complimenting each other's' ideas and policy positions. During his run, Castro repeatedly criticized candidates like former South Bend, Indiana, Mayor Pete Buttigieg and former Vice President Joe Biden, but remained on good terms with Warren and her campaign.

Castro and Warren spoke about the endorsement after he suspended his campaign last week, according to a Castro aide. Castro then traveled to Boston to record the endorsement video.

A number of Castro campaign staffers have already made the jump to Warren's team, and Castro plans to campaign with and without Warren in the coming weeks and months, the source said.

In the video, Castro starts off by discussing his family story. Notably, in his backing of the top female candidate in the 2020 race, he points to the "strong women who came before me."

"My story wouldn't be possible without the strong women who came before me. My grandmother, Victoria, came to the United States at 7 years old. She taught her family the value of hard work as she cleaned houses and worked as a maid," Castro says. "She passed on those values of hard work and perseverance to my mother, a single mom to myself and my twin brother, Joaquin."

In the video, Castro can be seen visiting Warren at her home in Cambridge, Massachusetts.

Warren tells Castro: "You did so many things in this campaign. And it continues to matter. It's not just in the past tense -- it matters."

Castro describes his Cabinet position in the Obama administration and his presidential run as an "honor."