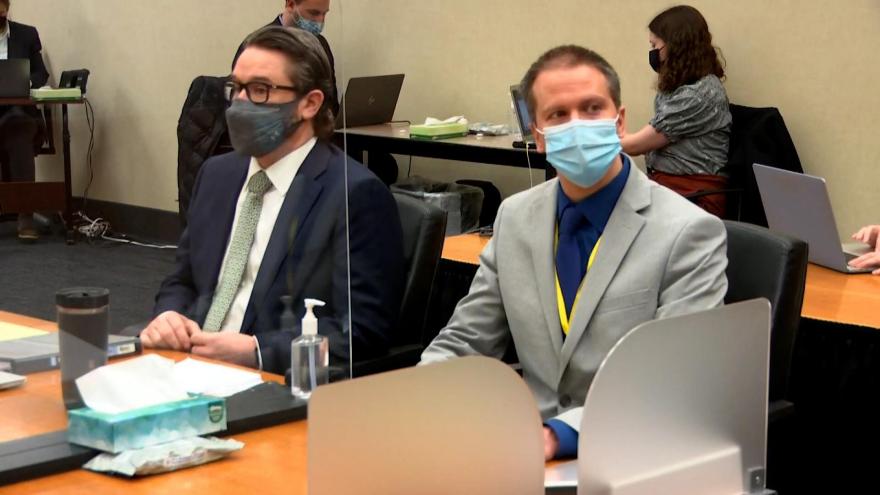 The jury is set to resume deliberations on April 20 in Derek Chauvin's trial on charges of murder and manslaughter in the death of George Floyd. Defense attorney Eric Nelson (left) is seen with Chauvin during trial proceedings.

(CNN) -- The jury resumed deliberations Tuesday in Derek Chauvin's trial on charges of murder and manslaughter in the death of George Floyd.

The jury of five men and seven women began deliberating Monday afternoon at 5 p.m. ET and continued until 9 p.m. ET. Jurors resumed deliberating Tuesday at 9 a.m. ET, according to the Hennepin County Court.

Six of the jurors are White, four are Black and two are multiracial, according to information released by the court. Two other jurors who were initially selected as alternates were dismissed prior to the start of deliberations.

The deliberations began after three weeks of testimony in one of the most closely watched cases of the Black Lives Matter era. In a first for Minnesota, the trial has been broadcast live in its entirety to accommodate Covid-19 attendance restrictions, giving the public a rare peek into the heart of the legal system.

The prosecution's case against Chauvin featured 38 witnesses broken into three parts. They sought to show Chauvin killed Floyd when the former Minneapolis Police officer kneeled on the neck and back of handcuffed, prone Floyd for 9 minutes and 29 seconds on May 25, 2020.

First, video from the scene and bystanders' testimony revealed Floyd gasping for air and saying "I can't breathe" 27 times under Chauvin's restraint. Next, a series of police supervisors and use-of-force experts criticized Chauvin's actions as excessive and unreasonable. Finally, five separate medical experts explained that Floyd died from a lack of oxygen when Chauvin restricted his ability to breathe -- what's known as "positional asphyxia."

The defense called seven witnesses of its own -- but not Chauvin himself, as he invoked his Fifth Amendment right not to testify.

Defense attorney Eric Nelson argued that Chauvin's use of force was unattractive but appropriate and said he was distracted by the crowd of hostile bystanders on the scene. He also argued that Floyd died due to fentanyl and methamphetamine use, his resistance of officers and his underlying heart problems, rather than due to Chauvin's actions.

"It's not the proper analysis because the 9 minutes and 29 seconds ignores the previous 16 minutes and 59 seconds. It completely disregards it," he said. "Human behavior is unpredictable, and nobody knows it better than a police officer."

Chauvin, 45, pleaded not guilty to two counts of murder and one count of manslaughter.

No matter this trial's verdict, the broader issues of how police treat Black Americans show no signs of lessening. Last week, just miles away from the courthouse, a Brooklyn Center police officer was charged with manslaughter after she fatally shot 20-year-old Daunte Wright during a traffic stop.

Tensions are high throughout the region, and authorities have ramped up security around Minneapolis. The Hennepin County Government Center has been surrounded by fencing and barricades since jury selection began in March. This past week, crews installed razor wire around some police buildings, and National Guard troops have been deployed in parts of downtown Minneapolis.

Gov. Tim Walz requested additional law enforcement assistance from Ohio and Nebraska in advance of the verdict, according to a press release from his office.

Closing arguments took up all Monday

In the state's closing argument, Schleicher said Chauvin kneeled on Floyd for so long because of his pride and his ego in the face of concerned bystanders.

"He was not going to let these bystanders tell him what to do. He was going to do what he wanted, how he wanted, for as long as he wanted. And there was nothing, nothing they can do about it because he had the authority. He had the power, and the other officers, the bystanders were powerless," he said. "He was trying to win, and George Floyd paid for it with his life."

In response, Nelson said Chauvin acted as a "reasonable officer" would in that situation and said there was no evidence he intentionally or purposefully used force that was unlawful.

Prosecuting attorney Jerry Blackwell then delivered a rebuttal rejecting the defense's claim that Floyd died because of an enlarged heart.

"The reason George Floyd is dead is because Mr. Chauvin's heart is too small," he said.