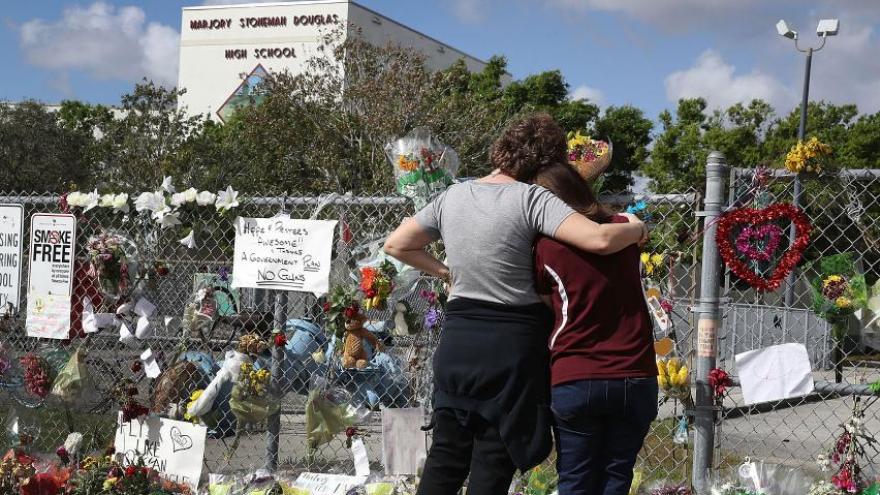 Margarita Lasalle, right, and Joellen Berman look on at the memorial in front of Marjory Stoneman Douglas High School as teachers and staff return to the school on February 23, 2018, for the first time since the mass shooting.

(CNN) -- Potential jurors are due to arrive Monday at a Florida courthouse where they could be chosen to help decide the fate of Nikolas Cruz more than four years after he killed 17 people in the deadliest high school shooting in US history.

Cruz, now 23, pleaded guilty in October to 17 counts of murder and 17 counts of attempted murder for the 2018 Valentine's Day shooting at Marjory Stoneman Douglas High School in Parkland that galvanized a nationwide movement against gun violence, helmed largely by the tragedy's teenage survivors and victims' families.

Prosecutors want a death sentence for Cruz, who at minimum faces life in prison. In states with the death penalty, a defendant deemed guilty of a capital offense faces a separate phase of court proceedings to determine the sentence.

Following Cruz's guilty pleas, the 12-member jury now being impaneled for the penalty phase will be asked to decide whether to recommend his execution. Six to eight alternates also are due to be picked, the judge said last week during a hearing.

The proceedings could last four to six months, both sides told state Judge Elizabeth Scherer on Wednesday. Prosecutors and defense attorneys are expected to present evidence of aggravating factors and mitigating circumstances that could tip whether Cruz is put to death. Jurors also could hear victim impact statements from survivors and victims' families.

"There were 17 people killed, so there is a story of the death of 17 people," Assistant State Attorney Jeff Marcus told the court in explaining why the penalty phase could last into the fall. "And then there are 17 more that are considered aggravating factors in the case."

Jurors would have to agree unanimously that at least one aggravating factor -- including the concurrent capital felony charges to which Cruz pleaded guilty, or whether he knowingly created the risk of other deaths -- exists among the 34 charges to then begin to discuss whether he should face the death penalty.

If that happens, they must be unanimous in recommending a death sentence, otherwise his sentence would necessarily be life in prison. If they do recommend capital punishment, the final decision still rests with the judge.

Cruz confessed to police soon after the shooting, according to a probable cause affidavit, but then pleaded not guilty. His attorneys later said he'd change his pleas to guilty if prosecutors took the death penalty off the table, but they never did. All the same, he switched his position to guilty on all 34 counts, setting the stage for the penalty phase.

14 students and 3 faculty members were slain

On the afternoon of February 14, 2018, then-19-year-old Cruz, who had been expelled from Marjory Stoneman Douglas, took an Uber to his former high school, according to an outline of events that prosecutor Michael Satz recited October 20 during the hearing at which Cruz pleaded guilty. Cruz had with him a rifle bag with an AR-15-style rifle and backpack that held firearm magazines and a tactical vest, Satz said.

"You better get out of here," Cruz told the student, per the prosecutor. "Something bad is about to happen."

After the shooting, Cruz put down his weapon, the remaining magazines and his tactical vest and fled, blending in at 2:27 p.m. with other students, Satz said. He was arrested that afternoon, about 3 miles from the school.

At the October plea hearing, Cruz responded "guilty" to each of the 34 charges he faced before addressing the victims and their families in a short statement to the court.

Cruz's apology, however, did little to comfort the parent of one slain student, who called it "ridiculous."

"I think he deserves as much of a chance as he gave my daughter and everyone else on February 14 of 2018," said Gina Montalto's father, Tony Montalto, when asked about Cruz facing the death penalty.

Cruz has already been sentenced to 25 years in prison after he pleaded guilty to attacking a jail guard in November 2018.

The shooting's impacts reached far beyond Parkland, a small Florida city about 50 miles north of Miami. In the weeks that followed, survivors and victims' relatives spoke out and confronted lawmakers, demanding more action to address gun violence in American schools.

Students all over the US joined them, staging their own protests and school walkouts. That movement culminated just over a month after the massacre with March for Our Lives as hundreds of thousands of demonstrators attending hundreds of marches across the country called for gun control reform. "Never Again," became the protesters' rallying cry.

While the full effect of the movement is hard to quantify, one year after the massacre, at least 67 new laws aimed at gun safety were enacted in 26 states, the Giffords Law Center to Prevent Gun Violence said at the time.

But school shootings have continued, with some 130 recorded at US campuses with K-12 students since Parkland, according to CNN's tally.

Still, the activism inspired by the Parkland shooting has also persisted. Last month, on the fourth anniversary of the March For Our Lives in Washington, activists from the organization spelled out "Thoughts and Prayers" on the National Mall using more than 1,100 body bags, CNN affiliate WJLA reported. Each represented lives the organization said were lost in gun-related deaths since Parkland.

And civil cases brought by the families of Parkland victims have been resolved. The US Justice Department settled 40 civil cases stemming from the shooting for $127.5 million, it said in a statement last month, adding the settlement "does not amount to an admission of fault by the United States." The FBI acknowledged after the shooting it failed to act on a tip about "the potential of (Cruz) conducting a school shooting," among other concerns.

Broward County Public Schools, the district that includes Marjory Stoneman Douglas High School, announced in December it would pay more than $26 million to 51 plaintiffs, including those who were injured and families of the 17 people killed.

"While we recognize that no amount of money can make these families whole, it is the school board's hope that this settlement will show our heartfelt commitment to the MSD families, students, staff and faculty and the entire Broward County community," the district's interim general counsel said.

Meantime, Broward County Sheriff's Deputy Scot Peterson, a school resource officer criticized for failing to confront Cruz during the shooting, has pleaded not guilty to charges stemming from the mass shooting, including counts of felony child neglect. A trial is set for September.