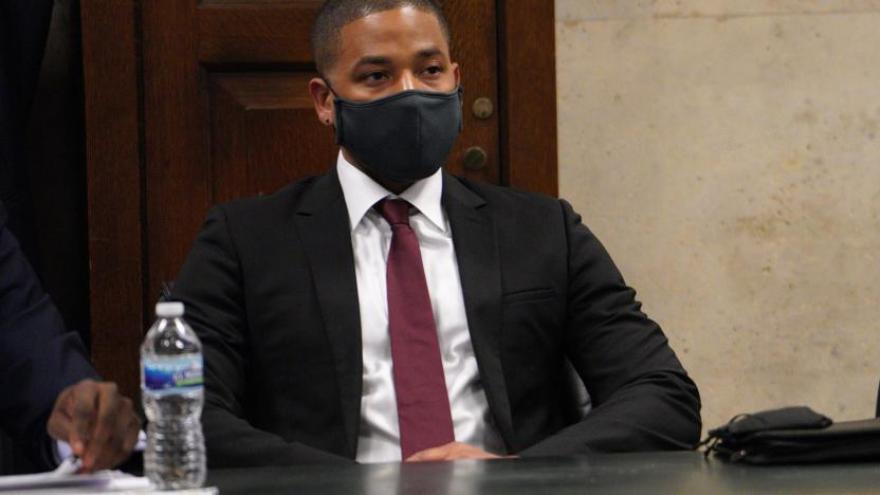 Actor Jussie Smollett appears at his sentencing hearing at the Leighton Criminal Court Building on March 10 in Chicago.

(CNN) -- Jussie Smollett was released from jail Wednesday night, after an Illinois appeals court granted an emergency motion by his defense attorneys. Smollett's legal team is looking to delay his sentence and grant him bond until their appeal on his conviction is decided on.

The former "Empire" actor was sentenced last week to 30 months of felony probation -- including 150 days in jail -- and ordered to pay restitution of more than $120,000 and a $25,000 fine for making false reports to police that he was the victim of a hate crime in January 2019.

"There is no room for politics in our court system," defense attorney Nenye Uche said in a news conference shortly after the actor's release. "Regardless of what you think about this case ... the real question is, should Black men be walked into jail for a Class 4 felony?"

"That's a disgrace," the attorney added. Uche, as well as other attorneys from the team who spoke Wednesday, criticized the judge who sentenced Smollett last week. Cook County Judge James Linn spoke to the actor for more than half an hour, criticizing his actions.

"The judge spent a great deal of time chastising, berating my client," Uche said. "I've never seen that before."

Over the past six days in jail, Smollett did not eat anything besides ice water, Uche said.

The appeals court order, entered on Wednesday, says Smollett "shall be released from custody ... upon posting of a personal recognizance bond (I Bond) in the amount of $150,000." A personal recognizance bond in Illinois means that a person is released on the condition that they will attend all required future court proceedings, usually without having to pay any money.

Smollett's defense filed the emergency motion last week, arguing he would be "irreparably harmed" if he serves a sentence for convictions that may be reversed, adding that he will likely serve his jail time before the completion of his appeal.

The attorneys added that exposure to Covid-19 is a serious risk because Smollett is immunocompromised.

The court granted the attorneys' motion, reasoning that it would be "unable to dispose of the instant appeal before the defendant would have served his entire sentence of incarceration."

In their response filed Wednesday, prosecutors vehemently disagreed with the defense's reasoning, arguing that there is "no emergency that warrants the extraordinary relief" of delaying Smollett's sentence while his appeal is pending.

"Mr. Smollett asserts that he is entitled a stay because he will most likely serve his short, 150-day jail sentence before his appeal on the merits is decided," part of the response read. "According to this logic, every defendant sentenced to a term of imprisonment less than a few years would automatically receive a stay pending appeal."

Smollett had an outburst in court last week

Smollett was found guilty in December on five counts of felony disorderly conduct for making false reports about what he said was an anti-gay and anti-Black hate crime.

The actor, who is Black and gay, told Chicago police that two unknown men attacked him on one January 2019 night, yelled racist and homophobic slurs at him, poured bleach on him and wrapped a noose around his neck. But investigators said they determined the actor orchestrated the attack and paid two brothers he knew from the Fox drama series to stage the act for publicity.

Smollett maintained his innocence under oath during his trial.

The judge spoke for more than half an hour during the proceeding, telling the actor that while many people vouched for Smollett and his character and asked the judge for a lenient sentence, Smollett's premeditation in the act he orchestrated was an "aggravating factor" in the case.

"You do have quite a record of real community service," the judge said Thursday. "I'm mindful of pleas of mercy, particularly from people that are in the arena." But, ultimately, the judge said, this act showed Smollett's "dark side."

Following the announcement of his sentence, Smollett addressed the judge, saying "I did not do this," before turning to the court and exclaiming he was not suicidal, and that "if anything happens to me when I go in there, I did not do it to myself. And you must all know that."

The judge ordered Smollett to be held in protective custody "by Mr. Smollett's request and this court's recommendation," CNN previously reported.

On Friday, the actor was being housed "in his own cell, which is monitored by security cameras in the cell and by an officer wearing a body worn camera who is stationed at the entrance of the cell to ensure that Mr. Smollett is under direct observation at all times," the Cook County Sheriff's Office said, stressing that the actor was not being held in solitary confinement.

Smollett was initially indicted in March 2019 on 16 counts of felony disorderly conduct after police determined his reports were false.

In a stunning reversal days later, prosecutors announced they were dropping all charges. In a Chicago Sun-Times op-ed published last week, Cook County State's Attorney Kim Foxx defended her office's decision, saying Smollett had already forfeited a $10,000 bond, had not been accused of a violent crime before and had paid a "reputational price" for what he did. The incident effectively ended Smollett's acting career.

Dan K. Webb, the special prosecutor later assigned to the case, announced he would further prosecute Smollett. In February 2020, a Cook County grand jury returned a six-count indictment against the actor for making false reports -- five counts of which Smollett was eventually convicted of and sentenced for.

A disorderly conduct charge for a false crime report is a Class 4 felony and punishable by up to three years in prison and a $25,000 fine.

Webb said last week he was "extraordinarily pleased" with the sentence Judge Linn handed down and that the judge's comments showed "he clearly has understood ... that this was a course of conduct that deserved severe punishment."

But during Wednesday night's news conference, Uche, one of Smollett's attorney's, called the proceedings in the case unconstitutional, as Smollett had already been charged before, had paid $10,000 and done community service.