Just in time for Christmas, look back at these best-selling toys from the last 70 years 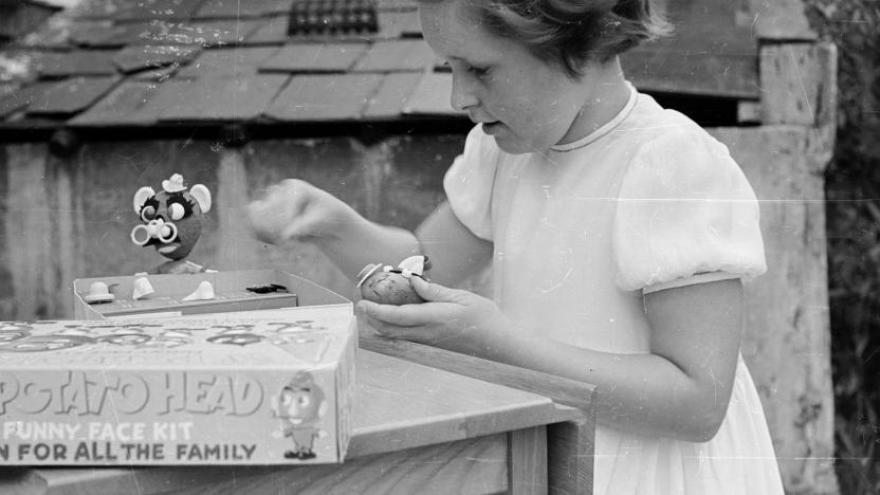 (CNN) -- It's not Christmas if there isn't a highly coveted toy that rises above the rest. And it's not the most-wanted toy of the year if the attempt to purchase it doesn't drive consumers absolutely bonkers.

We've chosen two of the most popular toys from each decade since the 1950s to wax nostalgic about -- the toys you don't forget since the moment you unwrap them or, if you're a parent, the toys you spent the wee morning hours waiting in line for, squaring off against other customers to get their hands on. These were the hottest -- and often, scarcest -- toys of their respective holiday seasons.

Mr. Potato Head encouraged kids to play with their food. Hasbro would provide the funny mouths and feet, the googly eyes and facial hair and assorted accessories that children would plug into their parents' real potatoes. It wasn't until the following decade that Hasbro subbed in a fake plastic tater rather than expect consumers to supply their own. A few "Toy Story" appearances and almost 70 years later, more than 100 million potato people have been sold worldwide. The potato is working hard to stay relevant, too -- earlier this year, Hasbro dropped "Mr." from its brand name.

Units sold that year: 25 million in the first four months

The concept of hula hooping had been around for centuries before the wise marketers at Wham-O resurrected them and turned them into a '50s fad. Hooping combined dance, exercise and friendly competition -- whose hips could keep their hoop twirling the longest? By the end of the decade, hula hoops had started falling out of fashion again ... only to be revived decades later, when fitness gurus created weighted versions and centered entire classes around the new and improved hoops.

The Etch-a-Sketch was a feat of science -- aluminum and static charges used to make art! -- that kept kids occupied for hours, as long as they didn't shake their masterpiece too hard and erase it. By turning knobs, users created temporary drawings and images that could be as crude or as detailed as they liked. For its contribution to the toy industry, the Etch-a-Sketch was among the first batch of toys to be inducted in the National Toy Hall of Fame, alongside Barbie and Erector sets.

Units sold that year: Half a million

A cute introduction to baking or a tiny fire hazard? It's hard to say, but Easy-Bake Ovens were coveted. More than 5 million were sold in less than a decade after their introduction, and they only became more popular as time went on, particularly when Betty Crocker got involved and shrunk her mixes down to miniature size. Whether the doll-sized desserts ever really tasted good is still debatable, but this gadget wowed bakers-in-training.

Units sold: Annual sales reached a pinnacle of 8 million by 1979

Gone were the days of shattered vases or busted TV antennae -- the foamy Nerf ball, introduced in 1969, was designed to be tossed indoors without aggravating parents. This was a ball that still bounced and flew, but wouldn't break decor. Then came the game-changer: 1972's Nerf football, which sent sales soaring and led to the production of toys such as the "Big Bad Bow" and blasters in later years.

All the high-tech Nerf upgrades like the "Big Bad Bow" or blasters came years later, but the original ball kept kids active on rainy days and their homes intact.

The first "Star Wars" film premiered in 1977, but toy manufacturer Kenner couldn't have predicted its massive, paradigm-shifting popularity because, rather than sell action figures for kids' new intergalactic heroes, Kenner sent them certificates they could redeem at a later date because they hadn't created enough of the figures yet. So, the year after "A New Hope" premiered, kids were finally able to play with Luke, Leia, R2 and Chewie. Kenner created hundreds more figurines, from Han and Darth Vader to obscure background players, which sold in the millions until 1985.

Breakout year: 1981 (though it debuted a year earlier)

The colorful cube wasn't just for brainiacs, though it was created by a Hungarian professor to help his students solve mathematical puzzles. The Rubik's Cube confused and frustrated even the most math-averse consumers of the early '80s, so to help those who got stuck, one 12-year-old fan published a guide on how to solve the cube that sold over 1.5 million copies.

Breakout year: 1983 (though they were conceived earlier)

There was just something about their dimples, unassuming smiles and unique names (signatured on their cloth bottoms) that made kids and collectors go crazy for Cabbage Patch Kids -- but the supply was nowhere near enough to meet the insatiable demand for the dolls. The baby fervor hit its fever pitch with the Cabbage Patch Kid riots in November 1983, when parents crowded toy stores and fended off fellow customers for the very limited quantity of the must-have doll. (See this archival footage of the riots from CNN affiliate WABC for airborne dolls and royally P.O.'d parents.)

A snuggly Muppet that giggles and vibrates when you tickle him -- what's not to love? Well, if you were a employee at any of the stores that managed to keep Elmo in stock, Christmas 1996 was a frenzied time. A Canadian Walmart employee was hospitalized after a herd of parents trampled him to score one of 48 ticklish Elmos the store had. CNN affiliate KGO in the Bay Area taunted parents by keeping one on the floor of a local toy store, then snatching it from them after they breathed a sigh of relief at having located the most-have toy of the season. The duped parents were decidedly not tickled.

And you thought Cabbage Patch Kids caused a craze. Beanie Babies were one of the first internet fads, driven by the limited quantity of animals. Collectors often resold the tiny stuffed creatures on eBay for several times the price they bought them for -- at one point, Beanie Baby purchases accounted for 10% of all sales on the site. But within a few years of the Beanie boom, the bubble burst -- because so many toys had been produced, their value went down, and collectors who'd hoarded Beanies to see if their value would accrue were disappointed.

Razor scooters were the rare gift that could satisfy recipients of all ages -- while kids could take them to the skate park, clinging to the handlebars while attempting kickflips, adult commuters could use them to zip to the office and avoid traffic. Bloomberg credits the scooter with kickstarting a "micro-mobility revolution" with a compact, pollution-free mode of transportation that was worth the pain of taking a Razor scooter hit to the ankle.

Nintendo's mid-2000s gaming system changed the way we play and refuted the argument that all gamers were lazy couch-dwellers. Not so with these games -- "Wii Sports" made its players hop out of their seats and swing a remote like it was a tennis racquet or baseball bat. "Just Dance" had young folks breaking it down to pop hits. There was even "Wii Fit," a game designed to get you moving. With its wide demographic -- from small children too young for Xbox to their grandparents -- the console was nearly impossible to find for much of its first year except for those with connections, serious stamina or dumb luck.

Breakout year: 2012 (though it was preceded by earlier iterations)

For its rudimentary animation and relatively story-free set-up, "Minecraft" remains incredibly popular among young people. A laid-back counterpart to the high-tech video games, the primary objective is to build, destroy, defeat enemies, live, repeat. But it's significant, said the New York Times Magazine in 2016, because of the digital gathering place it became for very young players -- a venue for them to learn and master how to thrive in the digital world

Everybody wanted to build a snowman in 2014, especially if its name was Olaf. Blame it on "Frozen" fever, when the rapturous response to Disney's animated flick about two snow-bound sisters inspired parents to snap up any and all toys based on the film. A doll aimed at toddlers called "Snow Glow Elsa" was the second best-selling toy of the year, and "Frozen" was the king of all licensed toys that year. At over half a billion in sales, it dominated the toy aisle, just as "Let It Go" was the year's inescapable earworm.