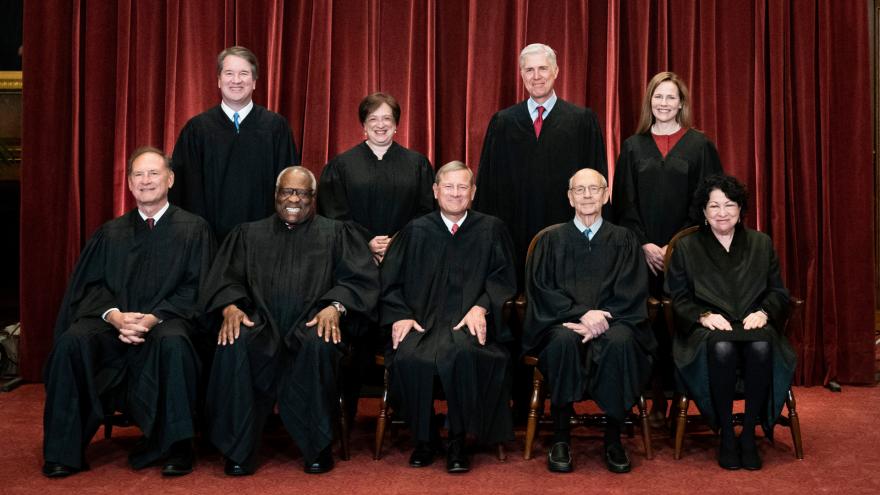 (CNN) -- Justice Amy Coney Barrett has been on the job since late October, but until now, because Covid kept the justices apart, she had not been pictured with her colleagues.

That changed Friday when the court released its new class photo depicting the junior-most justice with her colleagues.

Class photo or no, the 49-year-old Barrett has made her presence known, plunging into work, actively participating in cases heard by telephone amidst the global pandemic. While there have been some clear signs that her vote has solidified the court's conservative majority, in other areas, Barrett remains more of a mystery -- even drawing some concern from her allies. That's because the court has not released opinions in the most controversial cases of the term dealing with the issues such as the Affordable Care Act, religious liberty, unions and the Voting Rights Act.

The newly released photos and video suggests that the justices, fully vaccinated, might finally all be working out of the court building which has been closed to the public for almost a year leaving the majestic crimson curtain-lined chamber empty. It could mean that in the tense final weeks of the term, there is a possibility that some justices could actually discuss these fraught issues in person, or at the very least, from the same building.

They have already announced, however, that they won't physically take the bench for the remainder of the term that ends in June.

On April 9, for example, a majority of the court penned an unsigned order siding with a pastor who sought to hold bible studies at home but was blocked from doing so because of California's restriction.

"This is the fifth time the Court has summarily rejected the Ninth Circuit's analysis of California's Covid restrictions on religious exercise," the majority held, rejecting a lower court's opinion and ruling in favor of the pastor.

Roberts noted he would have ruled in favor of California but did not explain his thinking. Meanwhile, Justice Elena Kagan wrote for her two liberal colleagues rejecting the argument that the worshippers were being singled out for unfair treatment in violation of the First Amendment.

"The law does not require the State equally treat apples and watermelons," Kagan wrote.

Although the court earlier in the month dismissed one of the last election 2020 related cases, as Barrett took the bench last fall, the justices were staring at a bevy of potential election related petitions.

Some supporters of former President Donald Trump were dismayed that the court, including three of some of his nominees, ultimately didn't agree to take up requests to overturn election results.

As the junior-most justice, it's unlikely Barrett will be assigned some of the bigger opinions this term usually reserved for more senior justices, but she has already penned two majority opinions in under the radar cases.

But those who fought for Barrett's confirmation are eager to see how she will vote, particularly in a case concerning a Catholic adoption agency that refused to work with same-sex couples.

Just this week, the court broke down along ideological lines over a case concerning whether a judge had to separately determine whether a juvenile offender could ever be rehabilitated before imposing a sentence of life without parole. In a 6-3 decision, the court said such a finding was not necessary, triggering a forceful dissent from the court's three liberals who charged the majority with overruling recent precedent without directly saying so. Justice Sonia Sotomayor signaled her pique at her conservative colleagues charging they had gutted recent precedent.

"The Court is fooling no one," Sotomayor wrote.

The justices are about to enter their busy season, racing to finish all opinions by the end of June, but they are also being pelted with requests to take up cases for next term. Barrett's vote on the so called "shadow docket" could make a big difference particularly because the cases concern issues such as abortion and the scope of the Second Amendment.

Before Barrett joined the court, Roberts' vote was critical in those areas, but now there are five justices who can form a majority without him.

One thing that Barrett has so far dodged is the more mundane assignments reserved for the court's newest members. Barrett, for instance, will automatically be placed on the court's cafeteria committee -- relieving Brett Kavanaugh of his duties. It is a rite of passage -- even a hazing -- for new members, a task no one seems to relish especially because the cafeteria's food has a spotty reputation within the court.

Kavanaugh's contribution during his tenure was a pizza-making station. Justice Neil Gorsuch dodged his responsibilities almost entirely, paling in comparison to Kagan, who brought in a frozen yogurt machine and set an impossibly high standard for any incoming future junior-most justice.

Barrett has also gained some early controversy by reportedly signing a book deal with a $2 million advance -- according to Politico which first reported the news and said the book would cover how judges are not supposed to bring their personal feelings into how they rule.

Writing for Slate, Dahlia Lithwick said, "the notion of a justice who was rushed onto the court precisely because the president believed she would hand him the election if he needed her now holding forth on her mastery of open-mindedness is unseemly to the point of hinky."

Barrett is far from the only justice who has authored a book on the bench. Retired Justice Sandra Day O'Connor, for instance, wrote a memoir based on her years growing up on a ranch out west. Justices Clarence Thomas and Sotomayor wrote books early in their tenure about their diverse family stories. Justice Stephen Breyer has penned books more closely related to the law as has Gorsuch.

As for Barrett, she has not yet participated in speaking events, even over video, but an eventual book tour will likely produce an updated view of the justice who has yet to actually formally sit on the Supreme Court bench.