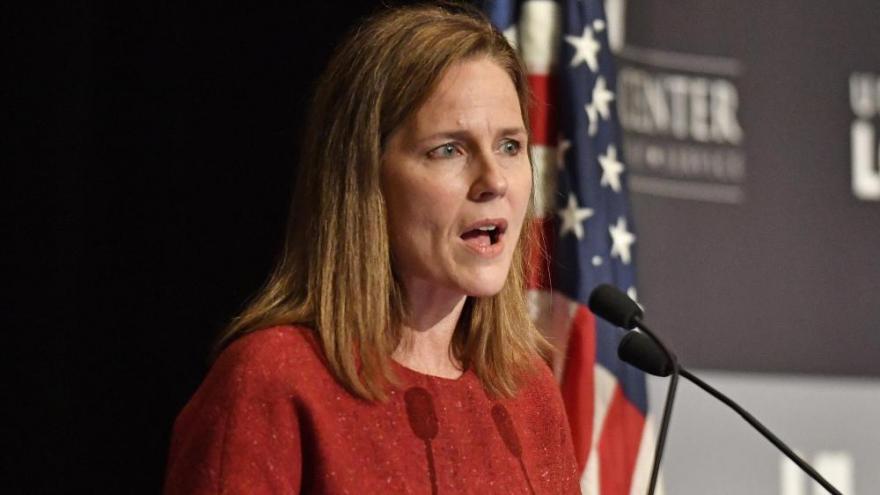 The Supreme Court is 'not a bunch of partisan hacks,' Justice Amy Coney Barrett said while speaking at the University of Louisville's McConnell Center in Kentucky, Sunday, September 12.

(CNN) -- Supreme Court Justice Amy Coney Barrett on Sunday rejected claims that decisions by the high court are driven by political views at a speech at the University of Louisville's McConnell Center.

"My goal today is to convince you that this court is not comprised of a bunch of partisan hacks," the conservative Barrett said, according to the Louisville Courier Journal. She said the high court is defined by "judicial philosophies" instead of personal political views.

"Judicial philosophies are not the same as political parties," Barrett said.

Barrett's speech comes after a string of dramatic actions by the justices. She voted with the majority to let the Texas law that bars abortions at six weeks to remain in effect and also to block the Biden administration's coronavirus-related eviction moratorium.

Barrett said that while she may not like results of her decisions, "it's not my job to decide cases based on the outcome I want," the newspaper reported.

"The media, along with hot takes on Twitter, report the results and decisions," Barrett later said. "That makes the decision seem results-oriented. It leaves the reader to judge whether the court was right or wrong, based on whether she liked the results of the decision."

RELATED: What the Supreme Court's order means for the future of Roe v. Wade

She also said, according to the Courier Journal, that she identifies as an "originalist" and citing Justice Stephen Breyer as an example of "pragmatism."

Breyer, along with other justices, often lament the public perception of the court as overtly political.

In a two-hour lecture at Harvard Law School this spring, Breyer bemoaned the common practice of referring to justices by the presidents who appointed them and of describing the nine by their conservative or liberal approach to the law. Justices, Breyer said, should not be regarded as "junior-varsity politicians."

Barrett, McConnell said, does not try to "legislate from the bench." He also noted she is from "Middle America" and the only current justice to not have attended Harvard or Yale.

The Supreme Court did not immediately comment on Barrett's speech.