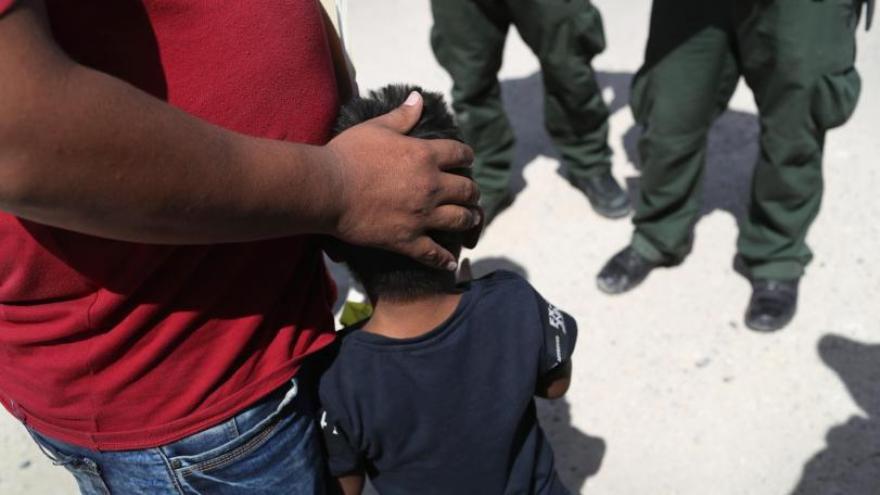 The Justice Department has informed attorneys representing separated migrant families that it will cease settlement negotiations and is ready to go back to court, according to an attorney representing families, and pictured, U.S. Border Patrol agents take a father and son from Honduras into custody on June 12, 2018 near Mission, Texas.

(CNN) -- The Justice Department has informed attorneys representing separated migrant families that it will cease settlement negotiations and is ready to go back to court, according to an attorney representing families.

The news comes after the White House came under political pressure following news of the talks and potential payments -- of up to $450,000 -- to families became public, but it was not immediately clear why the Justice Department ceased negotiations.

"While the parties have been unable to reach a global settlement agreement at this time, we remain committed to engaging with the plaintiffs and to bringing justice to the victims of this abhorrent policy," Justice Department spokesperson Dena Iverson said in a statement.

More than 3,000 children were separated from their families at the US-Mexico border under former President Donald Trump's "zero tolerance" policy, and attorneys are still trying to reach the parents of 270 migrant children, according to a November court filing in an ongoing family separation case.

The American Civil Liberties Union filed a class action lawsuit in 2019 seeking damages for the toll the separations took on families, and attorneys representing families have filed separate claims.

"The U.S. government deliberately abused young children and yet the Biden administration has allowed politics to stand in the way of making it right. That's shameful," Gelernt said in a statement to CNN.

President Joe Biden was asked about the talks last month and rejected the $450,000 figure, after which, the Justice Department told attorneys representing families who are seeking damages that settlements will not be that high, sparking confusion among attorneys and advocates about the Biden administration's position on the matter.

"It does not help when there's a lack of clarity about what the federal government is willing to do for the families," Nan Schivone, the legal director at Justice in Motion, which helps locate separated families, told CNN last month.

"When the news broke, it was not helpful because it sowed a lot of seeds of confusion about the willingness of the government to care for the families and atone for the past unlawful actions, the unlawful actions of the past administration," she added.

The zero tolerance policy, in which the Justice Department initiated criminal prosecutions of every adult illegally crossing the border, was ended after widespread opposition in summer 2018. The policy resulted in the separation of thousands of families, including those with infants, some only a few months old, because children can't be kept in federal jail with their parent.

Zachary Manfredi, litigation director for the Asylum Seeker Advocacy Project, said the Biden administration "officially broke its promise" to families who were separated at the border.

"The Biden administration has chosen to defend the policy of family separation in court," Manfredi said.