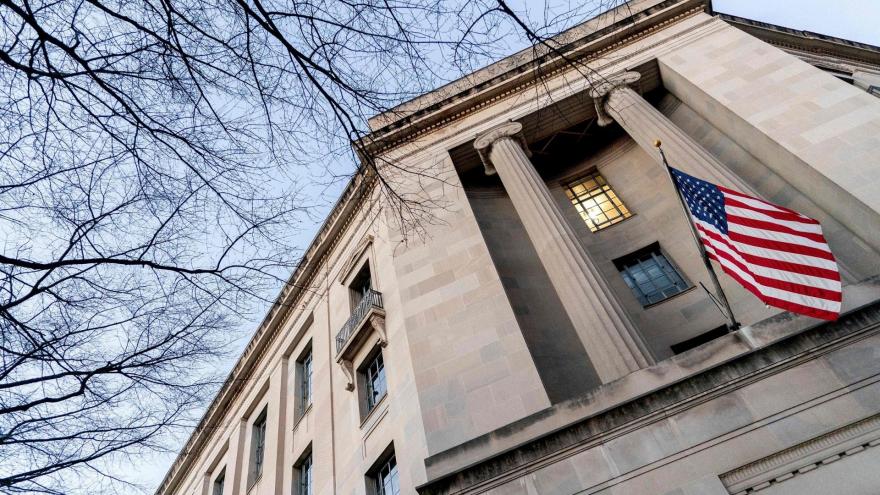 (CNN) -- The Justice Department has charged five people with helping the Chinese Communist Party stalk, harass or spy on political dissidents in the US, including a congressional candidate and a Los Angeles sculpture artist, according to new court filings and a press release.

"All the defendants allegedly perpetrated transnational repression schemes to target U.S. residents whose political views and actions are disfavored by the (People's Republic of China) government, such as advocating for democracy in the PRC," a DOJ press release said.

In arrests that targeted a ring of three men, the DOJ charged Fan "Frank" Liu, 62, whom the DOJ said is the head of a "purported media company;" Matthew Ziburis, 49, a former correctional officer in Florida; and Qiang "Jason" Sun, a tech company employee based in China.

Ziburis and Liu, who both lived on Long Island, have been arrested and are set to appear in court.

The trio's spying conspiracy, the Justice Department said, targeted pro-democracy dissidents in New York City, Indiana and California, including an artist whose sculpture of the Chinese President as a coronavirus molecule they sought to destroy -- and which ultimately was burned down. Ziburis, in pursuit of the artist, posed as an art dealer, then installed tracking devices in the artist's workplace and car, prosecutors alleged.

The group also worked to host what the Justice Department called "mock media sessions" to interview dissidents in ways that could harm their reputations.

In another criminal case made public on Wednesday, Shujun Wang, a 73-year-old activist in Queens, was working at the direction of the Chinese secret police, the Ministry of State Security.

Prosecutors say Wang sent information he learned about pro-democracy and human rights activists and Chinese dissidents back to China. A handler from the secret police instructed Wang at one point to meet with a person in contact with "Tibetans, Uyghurs and Mongolians," ethnic groups that the Chinese government has oppressed.

One dissident about whom Wang sent information was ultimately arrested in Hong Kong and jailed for political crimes, the Justice Department said.

Wang is also accused of lying to federal authorities when he denied being in touch with Chinese secret police contacts in 2017. The Justice Department says he later admitted his actions to an undercover law enforcement officer and others. He too has been arrested, the department said.

In a news conference Wednesday afternoon, Matthew Olsen, the assistant attorney general for national security, said that while the three cases are charged separately, they "expose attempts by the government of the People's Republic of China to suppress dissenting voices within the United States."

"Authoritarian states around the world feel emboldened to reach beyond their borders to intimidate or exact reprisals against individuals who dare to speak out against oppression and corruption," Olsen said, adding, "We will not tolerate such oppression here."

Alan E. Kohler Jr., who is the assistant director of the FBI's Counterintelligence Division, said that the three cases are emblematic of the "overall rise of authoritarianism" around the world.

"Whether it is disinformation from a Russian intelligence service, efforts to silence a US-based journalist by the intelligence arm of the government of Iran or harassment by the government of China's Ministry of State Security," Koehler said, "the FBI will protect the freedom of everyone within our borders."

Koehler encouraged private investigators and local law enforcement agencies to report potential crimes to the FBI, saying that there are "dozens" of transnational repression cases pending in the Untitled States, but "we believe we should have hundreds."

"Unlike the Chinese, Russian or Iranian intelligence services, whose only loyalty is to the regime, the FBI is committed to upholding the Constitution and protecting all American people," Koehler said.

Earlier Wednesday, charges against a retired Chinese intelligence agent, Qiming Lin, were unsealed in federal court in New York. That Chinese citizen is accused of conspiracy after he tried to enlist a private investigator's help to smear a 2022 congressional candidate in New York. Lin remains at large, the Justice Department said Wednesday.

Lin is accused of conspiring to harass and surveil a candidate for Congress, described as a former student leader in the Tiananmen Square protests of 1989 who then came to the US.

The candidate running for the House of Representatives is Xiong Yan, a person familiar with the matter told CNN. Yan is seeking the Democratic nomination for a seat representing the eastern part of New York's Long Island. According to his campaign website, he was a pastor in Queens and served in the US Army. He was a graduate student at Beijing University Law School and came to the United States in 1992, his website says.

Federal investigators are "investigating a scheme to undermine the candidacy of a U.S.-based Chinese dissident for the U.S. Congress in the general election of 2022 in order to prevent that candidate from drawing additional public attention to himself and his political speech," according to the complaint, made public Wednesday.

"I further assess that Lin was seeking to undermine the Victim's candidacy because of the Victim's past status as a student leader of the Tiananmen Square protests in 1989," an FBI agent wrote to the court in New York.

The case dates back to September 2021, when Lin reached out to a private investigator to gather information about the congressional candidate. The FBI said Wednesday that Lin is retired from China's Ministry of State Security and still lives in China.

"Based on my experience and training, I assess that Lin continued to act on behalf of the MSS even if ostensibly retired," FBI agent Jason Schwartz wrote in the complaint.

In another call, Lin told the private investigator, "If you don't find anything after following him for a few weeks, can we manufacture something?"

On Lin's calls with the private investigator, Lin floated the idea of creating a scandal about the congressional candidate, such as accusing him of stealing or having an extramarital affair. Lin also discussed planting a female campaign staffer to record having a relationship with the candidate, according to the complaint.

"There are, uh, some-some, uh who speak negatively about China," Lin told the investigator, saying that if the investigator could get information, "then this side will hold you in very high regards in the future."

Lin discussed paying the private investigator on a trip he planned to the US following the Winter Olympics in Beijing this year. He made clear that price was no issue, the FBI noted.

The criminal complaint also makes clear that the case is not just about one man trying to smear another -- and has broader implications for American politics.