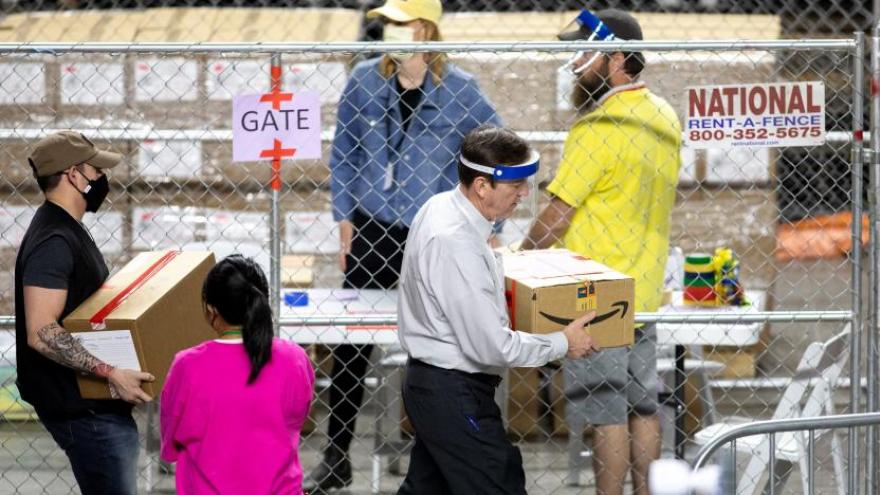 Former Arizona Secretary of State Ken Bennett (right) works to move ballots from the 2020 general election at Veterans Memorial Coliseum on May 1 in Phoenix, Arizona.

(CNN) -- The Justice Department on Wednesday put states and local officials on notice of their federal obligations when conducting post-election audits and dictating the rules for casting ballots.

The department released two new election guidance documents. They come as Arizona Republicans are in the midst of a controversial review of the 2020 results in the state's largest county, and while state GOP lawmakers across the country consider restrictive voting legislation.

"This document sets down a marker that says the Justice Department is concerned about this and we will be following this closely," a department official said Wednesday.

The DOJ audit memo addressed two main concerns: that election records are properly retained and preserved in accordance with civil rights law, and that audit procedures don't have the intent or effect of intimidating voters.

The guidance document references the plan -- for now, abandoned -- in the Arizona audit to contact voters in person or over the phone and collect information about how they cast their ballots.

"This sort of activity raises concerns regarding potential intimidation of voters," the DOJ's guidance said, while promising that the department "will act" if post-election audits are conducted in a way that has the "purpose nor the effect of dissuading qualified citizens from participating in the electoral process."

Already, the Justice Department has sent Arizona lawmakers a letter warning them of potential federal law violations in the audit's procedures.

"The reason we are issuing this guidance is to tell jurisdictions, generally, that we are concerned that if they're going to conduct these audits -- these so-called audits of the past elections -- they have to comply with federal law," the DOJ official said.

A second guidance memo covers federal voting laws as they affect how ballots are cast. It noted that the pandemic changed the way that people voted, with voters flocking to mail voting and early in-person voting. The guidance memo emphasized that the Justice Department will not presume any reversion back to previous voting procedures to be automatically lawful.

"What we're just saying to jurisdictions is ...you should not assume that if you abandon the practices that have made it easier for people to vote, that abandonment is not going to get scrutiny from the Department of Justice," the official said.