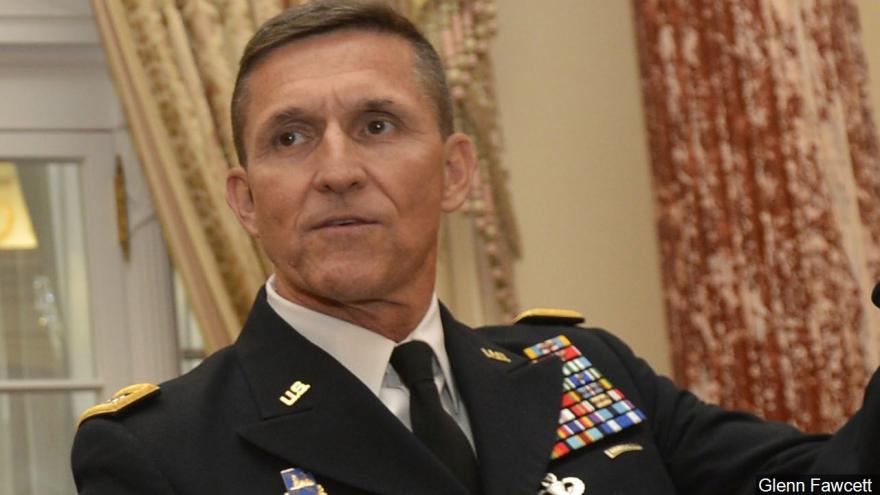 The Justice Department on Monday released a copy of President Donald Trump's pardon of former national security adviser Michael Flynn and formally asked a federal court to dismiss the case against him.

(CNN) -- The Justice Department on Monday released a copy of President Donald Trump's pardon of former national security adviser Michael Flynn -- giving Flynn far-reaching absolution from lying and foreign lobbying crimes he admitted to in 2017 and any other possible related crimes.

The Department also formally asked a federal court to dismiss the case against him.

Trump's pardon, announced last week, clears Flynn from anything related to the investigation the FBI conducted into his contacts with Russia; his cooperation during the Mueller investigation and other cases Mueller could have investigated; and his disclosures about secretly lobbying for Turkey in 2016 before becoming Trump's first national security adviser.

The specifics of Trump's pardon for Flynn are written very broadly.

The pardon also appears to excuse Flynn from telling the federal court under oath that he is guilty of his crimes and, later, claiming he is innocent, which could have resulted in a contempt proceeding, the Justice Department said in a filing with Judge Emmet Sullivan.

The pardon absolves Flynn from "any possible future perjury or contempt charge in connection with General Flynn's sworn statements and any other possible future charge that this Court or the court-appointed amicus has suggested might somehow keep this criminal case alive over the government's objection," the Justice Department wrote.

Sullivan has not responded yet in court. What the judge will say after years of dizzying legal proceedings for Flynn has been long-awaited.

Flynn's pardon and the dismissal of the case will bring to a close a saga that has become emblematic of the Trump presidency's scandals.

It started with Trump campaign adviser Flynn under investigation for his contacts with Russia. After lying to the FBI and to members of Trump's administration in early 2017, Flynn lost his job as national security adviser, setting in motion a series of events that led to Trump firing FBI Director James Comey and the appointment of special counsel Robert Mueller to investigate Russian interference in the election and the President obstructing justice.

Then, at the end of December 2017, Flynn became one of the most significant and earliest defendants to plead guilty and cooperate in the Mueller investigation. His cooperation led to the indictment of his lobbying partner Bijan Kian for work their firm did for Turkey in 2016, though a judge overturned a jury's conviction of Kian and the DOJ is still fighting for the Turkish lobbying case in an appeal.

This year, Flynn, represented by a new set of lawyers, and the Justice Department attempted to undo his guilty plea in court.

The case often has fueled Trump's campaign-time smears of Mueller as a "witch hunt."

Ultimately, Flynn scored the pardon after his legal team attacked the FBI, Mueller prosecutors and his prior defense team in court -- even after a federal judge had rejected the theory of Flynn's team that the FBI had entrapped him when its agents interviewed him in January 2017 about his contacts with Russia. Trump had also folded regular tweets about Flynn into his continued railings about Comey, the FBI, the courts and "Obamagate," a vague moniker of right-wing conspiracy theory.

Three sources told CNN on Tuesday that the White House had discussed a possible pardon, but cautioned that Trump could change his mind about making such a move. CNN previously reported that Flynn was among those likeliest to receive a pardon given his history as a Trump campaign associate who was convicted following special counsel Robert Mueller's investigation.

While the President has continued to falsely insist publicly that he won the presidential election rather than President-elect Joe Biden, the pardon of Flynn is a sign Trump understands his time in office is coming to a close. He's expected to issue a string of additional pardons before leaving the White House, according to multiple sources familiar with the discussion.