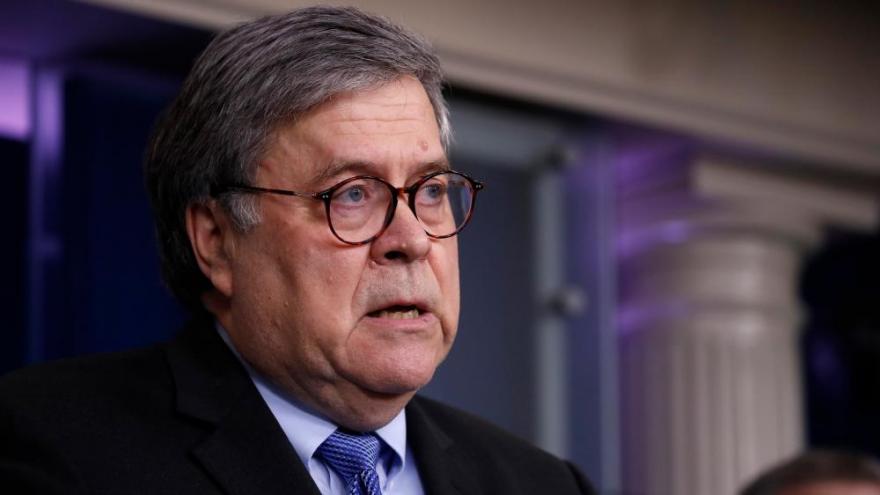 In this April 1, 2020, file photo, Attorney General William Barr speaks about the coronavirus in the James Brady Press Briefing Room of the White House in Washington. Officials are vowing to "maximize federal law enforcement presence" in the nation's capital after days of violent demonstrations.

(CNN) -- The Justice Department has reset execution dates for four convicted murderers who had battled the Trump administration's attempt to revive the use of the federal death penalty after more than 16 years.

Attorney General William Barr on Monday directed the Federal Bureau of Prisons to schedule the executions of four federal inmates, convicted for murdering children, for July and August by lethal injection.

Daniel Lewis Lee, a one-time white supremacist who killed a family of three, will be put to death in Terre Haute, Indiana, on July 13, the Justice Department said, marking the first federal inmate to be executed since 2003.

The three other federal inmates ordered to be executed in the days and weeks that follow are Wesley Ira Purkey for raping and murdering a 16-year-old girl; Dustin Lee Honken, for shooting and killing five people, including two young girls; Keith Dwayne Nelson for kidnapping, raping and strangling to death a 10-year-old girl.

"The four murderers whose executions are scheduled today have received full and fair proceedings under our Constitution and laws," Barr said in a statement Monday. "We owe it to the victims of these horrific crimes, and to the families left behind, to carry forward the sentence imposed by our justice system."

Attorneys for Lee, Honken, and Purkey criticized the decision.

Shawn Nolan, the attorney for Honken, cited misconduct in Honken's trial and sentencing and a denial of a "full and fair review" into the proceedings. Purkey's attorney, Rebecca Woodman, said Purkey suffers from dementia and mental illness and is "unable to comprehend" why the government wants him executed. Lee's attorney, Ruth Friedman, pointed to the victims' family's push for a life sentence rather than an execution and that Lee is still attempting to get a court to give "substantive consideration to the problems in his case." Friedman also said Lee has "long since renounced the skinhead groups he joined as a youth."

The executions had been delayed by legal challenges after Barr first announced last July that the Trump administration would reinstate the federal death penalty.

In April, the DC Circuit Court wiped away a lower court ruling that had delayed the executions, which had been initially scheduled beginning late last year.

On Monday, the Justice Department said each of the inmates had "exhausted appellate and post-conviction remedies, and no legal impediments prevent their executions."

Additional executions are planned to be scheduled at a later date, the Justice Department said.