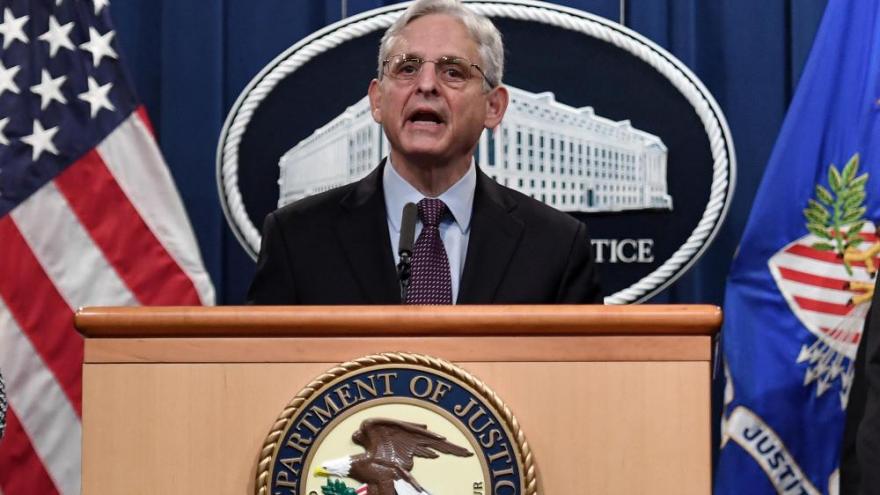 The Justice Department filed a lawsuit challenging legislative maps adopted by Texas Republicans in recent weeks, and pictured, Attorney General Merrick B. Garland speaks during a press conference at the Department of Justice in Washington, DC on November 8.

(CNN) -- The Justice Department filed a lawsuit Monday challenging legislative maps adopted by Texas Republicans in recent weeks that it says fail to recognize growth in the Latino population.

The lawsuit alleges that the redistricting plan drawn by Texas lawmakers violates the Voting Rights Act.

"The Legislature refused to recognize the State's growing minority electorate," the lawsuit, states. "Although the Texas Congressional delegation expanded from 36 to 38 seats, Texas designed the two new seats to have Anglo voting majorities."

It is the second voting rights-related lawsuit the Biden administration has filed against the state this year. The Justice Department has also challenged restrictive voting measures passed by the legislature earlier this year.

The lawsuit alleges that, in drawing the US congressional map, that Texas "failed to draw a seat encompassing the growing Latino electorate in Harris County," and that the state "excised minority communities from the core of the Dallas-Fort Worth Metroplex."

"Texas also eliminated Latino electoral opportunities in the State House plan through manipulation or outright elimination of districts where Latino communities previously had elected their preferred candidates," the lawsuit filed in the Western District of Texas says.

"The complaint we filed today alleges that Texas has violated Section Two by creating redistricting plans that deny or bridge, the rights of Latino and Black voters to vote on account of their race, color, or membership in a language minority group," Garland said at a news conference.

The law requires that state voting laws -- including laws that draw electoral maps -- provide eligible voters with "an equal opportunity to participate in the democratic process and elect representatives of their choosing," Garland added.