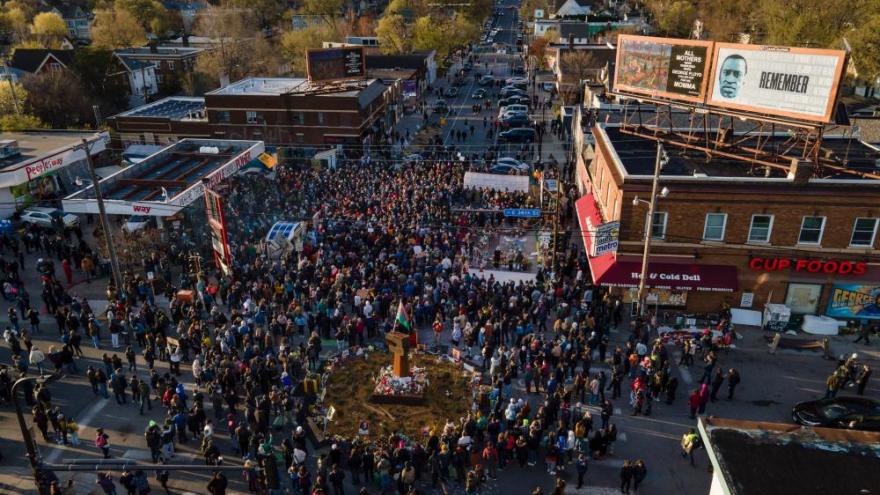 The Justice Department is launching a probe into policing practices in Minneapolis following the death of George Floyd and the murder convictions for ex-cop Derek Chauvin, Attorney General Merrick Garland announced on April 21. A crowd gathers at George Floyd Square after a guilty verdict was announced at the trial of former Minneapolis police Officer Derek Chauvin for the 2020 death of Floyd on April 20.

"The challenges we face are deeply woven into our history. They did not arise today, or last year; building trust between community and law enforcement will take time and effort by all of us," Garland said at Justice Department headquarters. "But we undertake this task with determination and urgency, knowing that change cannot wait."

ANALYSIS: The law delivered justice to George Floyd. America's political leaders are up next

The broad federal civil investigation will be to determine whether the Minneapolis Police Department has "a pattern or practice of unconstitutional or unlawful policing," he announced. It will include a "comprehensive review" of the department's "policies, training, supervision and use of force investigations."

It will assess whether the Minneapolis Police Department uses excessive force, including during protests, or engages in "discriminatory conduct," and if "its treatment of those with behavioral health disabilities is unlawful," Garland said.

The announcement from the Justice Department comes after the guilty verdicts against Chauvin for Floyd's murder. A bystander video captured Chauvin kneeling on the neck and back of Floyd, a 46-year-old Black man, for 9 minutes and 29 seconds on May 25, 2020.

Chauvin could face up to 40 years in prison for second-degree murder, up to 25 years for third-degree murder and up to 10 years for manslaughter. Three other officers facing charges in Floyd's death-- Tou Thao, J. Alexander Kueng and Thomas Lane -- are expected to go on trial in August.

The new civil investigation is separate from an independent federal criminal investigation into the death of Floyd, which was first announced in May 2020 under the Trump administration and is still ongoing, according to the attorney general.

The civil investigation will be handled by the Justice Department's civil rights division and the US Attorney's Office for the District of Minnesota, Garland said.

One element of the civil investigation could focus on the issuing of the initial Minneapolis Police Department press release regarding the Floyd death, which was not an accurate description of the arrest, according to officials familiar with the matter.

Justice Department investigators will consider whether the Minneapolis Police Department has a larger pattern of misrepresenting interactions with the community, the officials said.

In his announcement, Garland said the Justice Department will also review the department's "systems of accountability," which include "complaint intake, investigation, review, disposition and discipline."

The Justice Department has already begun reaching out to community groups and members of the public about their experiences with Minneapolis police, he said.

Garland acknowledged that police officers have "difficult jobs," but added, "I strongly believe that good officers do not want to work in systems that allow bad practices. Good officers welcome accountability."

Frey called it "an opportunity to continue working toward deep change and accountability in the Minneapolis Police Department." The city council, while noting their limited oversight of the police department, said it stands "ready to aid in this process as full partners." The city council last year had voted to redirect $7.77 million from the police budget to other programs after Floyd's death.

Floyd's death ignited a year of protests and reckoning about US policing, with Democratic and progressive calls to reform the system.

President Joe Biden on Tuesday called the verdict in the Chauvin trial "a much too rare" step forward for Black men and said "we can't stop here." The trial and other recent police shootings have increased pressure on the Biden administration and US lawmakers to make policy changes. In the coming weeks, key Democratic and Republican lawmakers plan to engage in substantive discussions to see if a policing overhaul deal can be reached by the time of the anniversary of Floyd's death next month.

In a speech last week, Garland had vowed to examine the practices of police departments that commit civil rights violations.

Garland at the time said the Justice Department's efforts would include using grants to help police departments around the country "improve their practices through funding and technical assistance, leverage to promote policing policies that benefit communities and enhance trust."

The attorney general also rescinded a Trump-era directive that limited the usage of the civil settlements with police department that have allegations of civil rights violations.