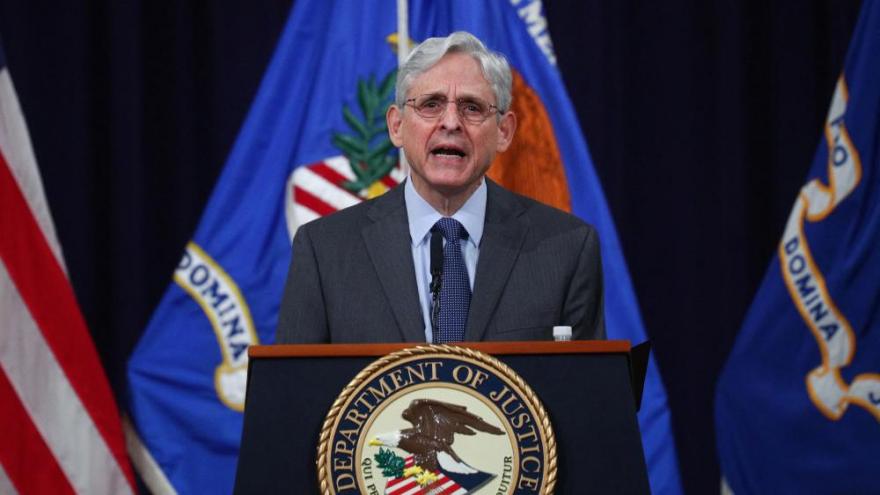 US Attorney General Merrick Garland, pictured here in Washington, DC on June 11, says the Department will "strengthen" rules regarding seeking congressional records, following reports that the previous administration seized the records of journalists, members of Congress and their families.

(CNN) -- The Justice Department will "strengthen" rules regarding seeking congressional records, Attorney General Merrick Garland said in a statement Monday, following reports that the previous administration seized the records of journalists, members of Congress and their families.

Over the last few weeks, it was revealed that during the previous administration the phone records from journalists with The New York Times, Washington Post and CNN were seized as well as Democratic members of Congress were seized.

But in Garland's statement, he emphasized that there are "important questions that must be resolved" when it comes to the Justice Department getting records from members of Congress and their staff. He suggests the department has concerns that sensitive matters weren't flagged to higher levels as they should have been.

The Justice Department's Inspector General on Friday announced a review of the department's subpoenas powers "and other legal authorities to obtain communication records of Members of Congress and affiliated persons, and the news media in connection with recent investigations of alleged unauthorized disclosures of information to the media by government officials."

Representatives from the effected news outlets are scheduled to meet with DOJ officials Monday afternoon.

Read the full statement from the attorney general:

"As I stated during my confirmation hearing, political or other improper considerations must play no role in any investigative or prosecutorial decisions. These principles that have long been held as sacrosanct by the DOJ career workforce will be vigorously guarded on my watch, and any failure to live up to them will be met with strict accountability. There are important questions that must be resolved in connection with an effort by the department to obtain records related to Members of Congress and Congressional staff. I have accordingly directed that the matter be referred to the Inspector General and have full confidence that he will conduct a thorough and independent investigation. If at any time as the investigation proceeds action related to the matter in question is warranted, I will not hesitate to move swiftly.

"In addition, and while that review is pending, I have instructed the Deputy Attorney General, who is already working on surfacing potentially problematic matters deserving high level review, to evaluate and strengthen the department's existing policies and procedures for obtaining records of the Legislative branch. Consistent with our commitment to the rule of law, we must ensure that full weight is accorded to separation-of-powers concerns moving forward."

RELATED: I'm a journalist and the Trump administration tried to secretly obtain tens of thousands of my emails