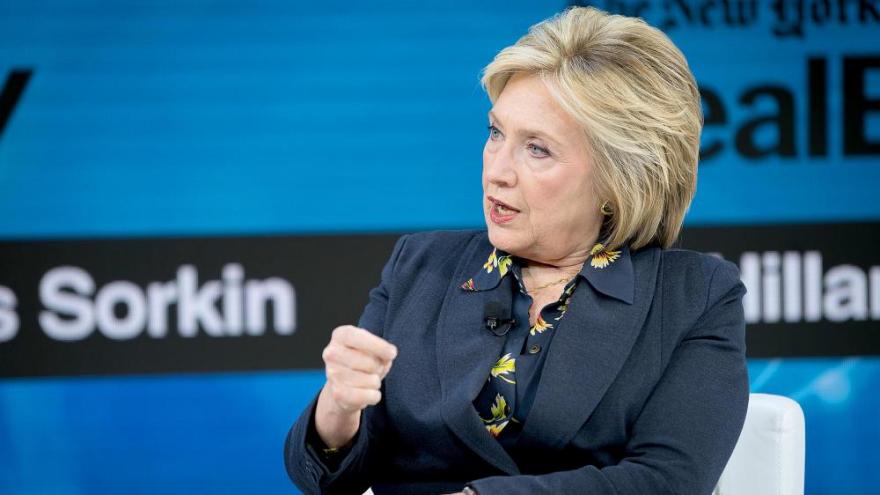 Hillary Rodham Clinton, Former First Lady, U.S. Senator, U.S. Secretary of State speaks onstage at 2019 New York Times Dealbook on November 06, 2019 in New York City. A Justice Department review of business dealings tied to Hillary Clinton -- championed by President Donald Trump and his allies -- has wound down with officials not finding enough evidence to recommend the formal opening of a criminal investigation, according to current and former US officials.

(CNN) -- A Justice Department review of business dealings tied to Hillary Clinton -- championed by President Donald Trump and his allies -- has wound down with officials not finding enough evidence to recommend the formal opening of a criminal investigation, according to current and former US officials.

The Justice Department has not formally closed the review, which was led by US Attorney John Huber of Utah, the officials told CNN.

The probe, which launched in November 2017 under then-Attorney General Jeff Sessions, was given momentum by Trump and conservatives on Capitol Hill who pushed for greater scrutiny of the former Democratic presidential nominee.

Huber was said to be examining allegations that donors to the Clinton Foundation had been given special treatment by Clinton when she served as secretary of state in the first half of the Obama administration.

The allegations first were investigated in 2015-16 and were based at least in part on claims published in the 2015 opposition research book "Clinton Cash," which was written by conservative writer Peter Schweizer. Trump and his allies have criticized the Justice Department for using opposition research paid for by Democrats in the probe of ties between associates of the Trump campaign and Russia.

The review also explored allegations that a Russian nuclear energy agency donated to the Clinton Foundation in order to later secure her approval for its purchase of Uranium One, a uranium mining company, when Clinton led the State Department.

At the time of Huber's appointment, special counsel Robert Mueller had been deep into his damaging investigation into possible collusion between the Trump campaign and the Russian government, and leading Republican lawmakers, as well as Trump, had hounded the attorney general to appoint a second special counsel to look into the Clinton matters.

Instead, Sessions turned to Huber, a respected prosecutor who had first been appointed to the position by President Barack Obama.

Huber's review had largely paled in comparison to the Mueller investigation, and officials in Washington hoping for a counterpunch to the special counsel's blows soon turned their attention to the Justice Department's inspector general, Michael Horowitz, as well as US attorney John Durham of Connecticut, who both undertook separate efforts to examine the origins of the Russia probe.

Trump and Attorney General William Barr have continued to point towards Durham's probe in recent weeks as the final word on potential FBI misconduct, while largely looking past Horowitz's findings, which criticized a series of mistakes made by agency officials but concluded that there was no evidence that they had acted with bias as they opened and carried out the Russia investigation.