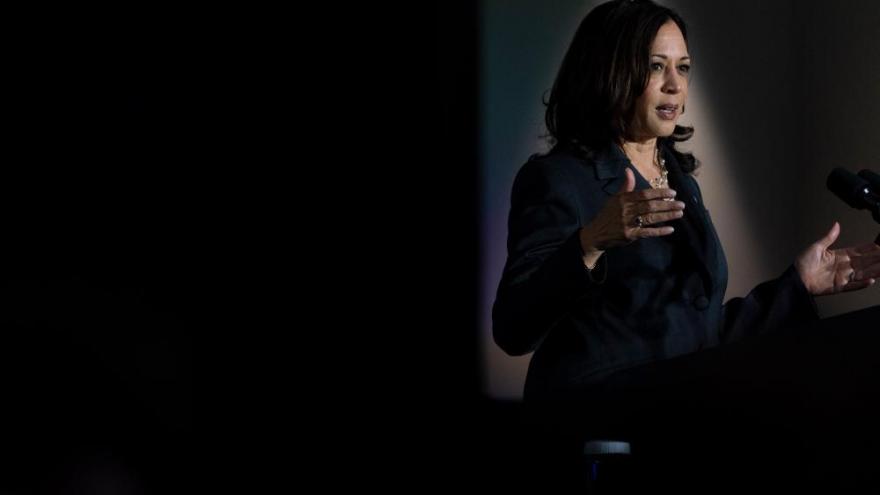 Vice President Kamala Harris speaks at Clark Atlanta University on June 18 in Atlanta. Harris will head to the US-Mexico border on June 25, a source familiar with the trip told CNN.

(CNN) -- Vice President Kamala Harris will head to the US-Mexico border on Friday, her office confirmed, following weeks of criticism that she hasn't visited the area despite being tasked by the Biden administration with trying to stem the flow of migration from Central America.

The upcoming trip to El Paso, Texas, comes as Harris has been dogged by Republican criticism of her absence at the border after being asked by President Joe Biden to lead diplomatic relations in the Northern Triangle in an attempt to alleviate the tide of migration over the southern border.

In a statement released Wednesday, Harris spokeswoman Symone Sanders confirmed the trip, adding that she would be accompanied by Department of Homeland Security Secretary Alejandro Mayorkas.

Politico was first to report the trip.

Senior administrations officials rejected the notion that Harris' visit amounts to the vice president bucking to GOP pressure to visit the southern border.

"She has always said she will visit the US border," one senior official said. This official pointed to Harris saying in March she had been to the border before and "I'm sure I will again."

The senior official called it a "cause-and-effect" strategy, labeling Harris' efforts in Guatemala and Mexico as addressing the cause and her upcoming visit to the border as addressing the effect. That's despite months of countering from aides both publicly and privately that Harris' focus is not the border.

"She went first to the cause. This trip follows the extension of that work in addressing the root causes. It's the effect, because what happens at the border matters and is the direct effect of what's happening in the countries in the [Northern Triangle] region," the official said.

Officials argued her trip's timing is a matter of "sequencing," defending the notion that the first place Harris should have visited was not the US-Mexico border but the actual Northern Triangle nations.

"This really is to continue informing her strategy and work," another official said. Aides to Harris summarized her Guatemala and Mexico visit in similar terms earlier this months, describing it as a fact finding mission that would inform her larger strategy on how to deal with the region.

"It's a very important location as we work to rebuild a fair, orderly and humane immigration system," the third senior administration off said.

El Paso, this official said, is also a key entry point for migrants and "representative of larger birder dynamics, which is what the VP wants to see for herself." The official insisted that Harris "is not concerned with (GOP) lines of attack, she's focused on doing the work."

White House press secretary Jen Psaki said Wednesday that Harris' trip is a part of her efforts to address the root causes of migration.

"I will note that I've also said here from this podium, and she has also said that when it was the right time, she may go to visit the border," Psaki said, adding that that the "planning and timing" was done in coordination with the Department of Homeland Security.

The vice president and her team have been staring down attempts from Republicans to make her the face of the Biden administration's response to the crisis at the border. It's a role that then-Vice President Biden had under Obama.

Still, it put a politician likely to run for president at the center of one of the administration's most divisive issues. In response, her office has repeatedly sought to make clear, both privately and publicly, that she has a laser focus on diplomatic relations and the conditions that push migrants to make the journey and not the politically fraught situation at the US-Mexico border.

A record number of unaccompanied children crossed into the US this spring, further intensifying GOP criticism of the Biden administration's handling. US Customs and Border Protection encountered more than 180,000 migrants at the southern border in May, putting the US on track to surpass the number of border crossings in fiscal year 2019.

That tension reached its apex earlier this month during her first international trip as vice president, a two-day trip to Guatemala and Mexico, during which she likened not going to the border to also not having visited Europe under questioning by NBC's Lester Holt.

"I, and I haven't been to Europe. And I mean, I don't -- I don't understand the point that you're making," Harris said with a laugh to Holt when pressed about the fact that she hadn't visited the US-Mexico border.

She added: "I'm not discounting the importance of the border."

The fallout from her answer, at least in part, obscured the larger message of the trip. The vice president had in-person bilateral meetings with leaders of both countries, as well as with civil society organizations. Supporters of Harris pointed to the agreements fostered with both the Guatemalan and Mexican governments -- and the praise she received from leaders of both countries and civil society afterward -- as clear signs that the vice president achieved her objective, which was deepening diplomatic relations.

During a news conference in Mexico City on that trip, Harris eventually said she would go to the border, but added that it's "short sighted" to "respond to the reaction as opposed to addressing the cause."

"When the President asked me to deal with this issue, it was about addressing the root causes of migration, and the root causes are based on the problems and the challenges that people are facing in countries like Guatemala," she said, "which is why I was there."

Harris, a former California senator and attorney general, contended that in both roles she had been to the border many times before to see what was happening on the ground and would soon go again.

While Harris finally committed to visiting the border during her end of trip news conference in Mexico, the vice president's office had not said when she would go, other than "soon."

The third senior official said Harris was already scheduled to fly west to her home in California and the timing "worked out well with our partners on the ground."