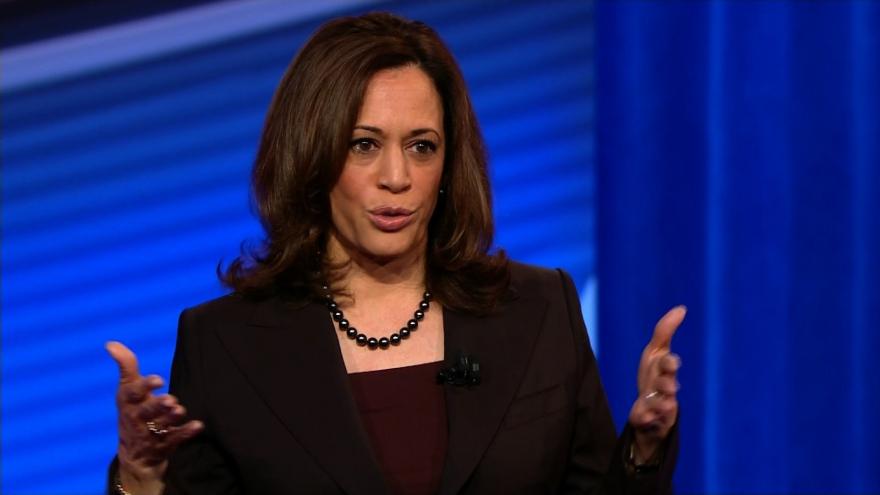 (CNN) -- Democratic presidential candidate Sen. Kamala Harris released a health care plan on Monday that would put the US on the path toward a government-backed health insurance system but stops short of completely eliminating private insurance.

Harris' proposal, which her campaign unveiled just days before she takes the stage in Detroit for the second Democratic presidential debate, hosted by CNN, positions her to the right of progressives, such as Sen. Bernie Sanders, whose plan goes farther and gets to a "Medicare for All" health care system more quickly. But it is to the left of moderates like former Vice President Joe Biden, who would retain the present system but add a government-run -- and presumably less expensive -- insurance option to the Affordable Care Act exchanges.

The future of private insurance in America has become a key point of difference among the more than 20 candidates running for the 2020 Democratic nomination and a litmus test among progressives who have publicly declared their support for Medicare for All. Harris has offered mixed messages so far on the role of private insurance, at times indicating she'd eliminate private coverage and at other points saying that she'd keep it in some form.

Both the Biden and Sanders teams criticized Harris' plan on Monday.

"The new, have-it-every-which-way approach pushes the extremely challenging implementation of the Medicare for All part of this plan ten years into the future," Biden deputy campaign manager Kate Bedingfield said. She called the release the latest in "a long and confusing pattern of equivocating about (Harris') stance on health care in America."

"That pattern has now taken yet another twist," Bedingfield said in a statement.

Sanders policy director Josh Orton also weighed in, hitting Harris from the left over her decision to keep a role for private insurers.

"It's bad policy, bad politics, and compared to Medicare for All it vastly expands the ability for private insurance corporations to profit from over-billing and denying care to vulnerable patients who need it the most," he told CNN.

Later, Sanders himself criticized the proposal.

"Well, first of all, I like Kamala. She's a friend of mine, but her plan is not Medicare for All," Sanders told CNN's Jake Tapper on "The Lead" hosted from Detroit on Monday. "What Medicare for All understands is that health care is a human right and the function of a sane health care system is not to make sure that insurance companies and drug companies make tens of billions of dollars in profit."

"The function of Medicare for All is to guarantee health care to all people as soon as possible," Sanders continued.

The Harris plan makes clear she supports a role for private insurance companies within the health care system, in a stark difference from the Medicare for All Act proposed by Sanders, which essentially eliminates private insurance. Harris calls for transitioning to a Medicare for All-type system over a 10-year period -- longer than the four-year transition period laid out by Sanders. Her plan also does not raise middle class taxes, another distinction with Sanders.

"This isn't about pursuing an ideology," Harris wrote in the post. "This is about delivering for the American people."

Harris would expand on the current Medicare system, which consists of the traditional Medicare program but also provides a private insurance option called Medicare Advantage. About one third of Medicare enrollees -- or 22 million people -- have signed up for these private plans, according to the Kaiser Family Foundation.

"We will allow private insurers to offer Medicare plans as part of this system that adhere to strict Medicare requirements on costs and benefits," writes Harris. "Medicare will set the rules of the road for these plans, including price and quality, and private insurance companies will play by those rules, not the other way around."

Harris' proposal would greatly change and likely shrink the offering of employer-sponsored health plans, which now cover more than 150 million Americans. Employers and unions would have the option to provide a private Medicare plan that would have to be certified by the Medicare program. They could also offer private supplemental insurance plans that covers cosmetic surgery or medical care abroad.

"This plan builds on the progress we made in the Affordable Care Act and expands upon its promise of universal coverage through a sensible expansion of the popular Medicare system," she said. "To get all Americans covered by health insurance, where cost is not a barrier, we need innovative ideas like this. Senator Harris' plan is a smart way to get to Medicare for All where all individuals and employers can transition smoothly into a system that covers everyone."

Harris expands the transition time for achieving her Medicare for All goal to 10 years, as compared to the four years proposed by Sanders under his Senate bill. But Americans will also be able to buy into Medicare immediately if they want.

"By extending the phase-in period to 10 years, we will decrease the overall cost of the program compared to the Sanders proposal, and we can save additional money by accelerating delivery system reforms and value-based care that rewards meaningful outcomes," explained Harris, who has signed on as a co-sponsor to the Sanders bill.

Another notable difference in the Harris plan to the Sanders bill -- she would not increase taxes on the middle class. Under the Sanders plan, households making above $29,000 would be taxed an additional 4% income-based premium. Harris raisies the threshold, exempting households making below $100,000, with an even higher income threshold for families living in high-cost areas. A progressive tax system would be designed for households making over $100,000.

In a CNN interview earlier this month, Harris pledged she would achieve universal health care without raising middle-class taxes, saying, "I'm not prepared to engage in a middle-class tax hike. The rules have been written against middle class and working families for far too long."

A campaign aide says Harris' health care proposal would expand Medicare's coverage to dental, vision and long-term care. Out of pocket costs would be capped at $200, similar to the Sanders plan, so Harris' plan virtually eliminates cost sharing and ensures no deductibles or copays.

One issue Harris doesn't address in her post is how insurers would get reimbursed. They currently get paid by the federal government and, in some cases, enrollees pay a monthly premium in addition to their Medicare premium.

"This is a great first step," said Sabrina Corlette, research professor at the Georgetown Center on Health Insurance Reforms. "It still envisions Medicare for All and the 10-year ramp is a practical reality. Her proposal is a nod that many people like to have that option (of private insurance), while maintaining that everyone would be covered in this guaranteed Medicare for All system."

Corlette says she'll support whomever becomes the Democratic nominee but does not work with the Harris campaign. She sees many paths for achieving Medicare for All and applauded the Harris team for releasing a plan.

But, she warned, "the devil's in the details."

The biggest detail is how Harris would pay for this overhaul of American health care without raising taxes on the middle class.

Harris says she would tax Wall Street stock trades at 0.2%, bond trades at 0.1%, and derivative transactions at 0.002% -- a plan Sanders has floated in the past to pay for some of his progressive proposals. She would also tax offshore corporate income at the same rate as domestic corporate income.

Economist Michael Linden, a former senior policy adviser to the Senate Health, Education, Labor and Pensions Committee, tells CNN that he believes those corporate taxes would roughly cover the gap between the Sanders bill and Harris proposal, avoiding the tax on families making less than $100,000.

The problem, says Linden, "We don't know how much Sen. Harris' proposal will cost with a 10-year phase in. No one's done an estimate."

Dr. Kavita Patel, who served as director of policy for the Office of Intergovernmental Affairs and Public Engagement in the Obama White House, applauded the Harris plan, saying it shows "Sen. Harris is serious on healthcare. This is a pragmatic path to universal coverage," she says.

Patel helped develop policy for the Affordable Care Act and believes Harris' plan builds on the lessons of the ACA.

"I always said the ACA was step one," says Patel. "There are critical pieces of the ACA that are informing Harris' team. ACA was our path to universal coverage."

And Patel sees an important distinction between Harris and the former vice president, characterizing Biden's health policy position as "practical politically, but incremental."

"Harris in her plan is redefining what access to healthcare looks like and guards it against future administrations," says Patel, citing how the Trump Administration has whittled away at the ACA.

But another Obama-era administrator, while noting Harris has now planted herself squarely to the right of Sanders yet to the left of Biden, warned against making too many distinctions between the Democrats.

"What you're talking about here is sky blue vs powder blue whereas Trump is blaring grey," says Andy Slavitt, a former Obama administrator who oversaw Medicare and the ACA. "Save some energy for acknowledging that there's a significant contrast to the man who enjoys the electoral advantage in the general. Americans want healthcare to work, they're less obsessed about the details than what the debates will let on."

Correction: This story has been updated to accurately reflect the effect of Harris' plan on employer-sponsored coverage.