Kelly Craft confirmed to be next US ambassador to the UN 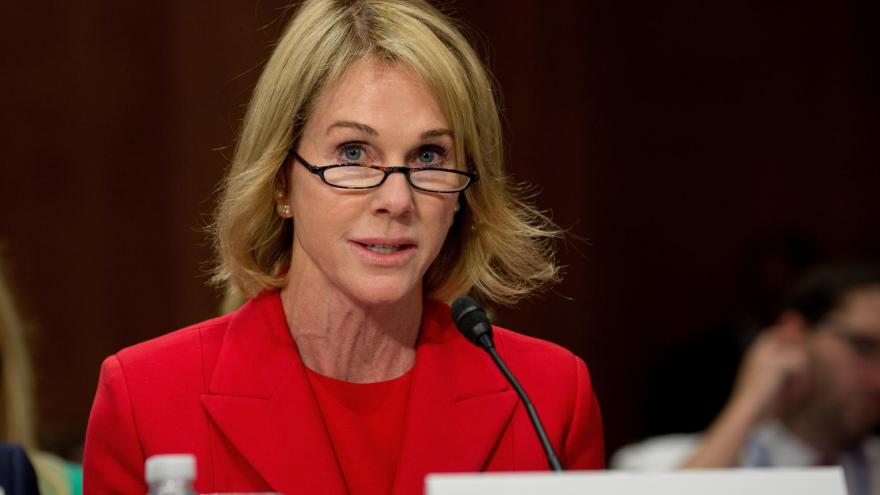 The Senate voted to confirm Kelly Craft to be the next US ambassador to the United Nations on a 56-34 largely party-line vote.

(CNN) -- The Senate voted Wednesday to confirm Kelly Craft to be the next US ambassador to the United Nations on a 56-34 largely party-line vote.

Craft, who has been serving as the US ambassador to Canada, will in her new role replace former Ambassador Nikki Haley, who resigned last October.

The job is not expected to be the Cabinet-level posting that Haley had insisted upon, leaving Secretary of State Mike Pompeo and national security adviser John Bolton firmly in control of US foreign policy.

President Donald Trump tweeted his congratulations on Thursday.
"Congratulations to Kelly Knight Craft of #Kentucky on her confirmation as United Nations Ambassador. After having served so admirably as Ambassador to Canada, & having done an outstanding job no matter how difficult the task, Kelly will be fantastic at the United Nations. Winner!" Trump said.

Craft has been a major donor to the Republican Party, the Republican National Committee and Trump's 2016 election campaign, as well as to several of the Republican lawmakers on the Senate Foreign Relations Committee who voted to approve her nomination in June.

Many Democrats opposed Craft, questioning her on a range of issues, including the impact of her family's coal fortune on her ability to work on climate issues at the UN. Craft, who is married to the CEO of Alliance Resource Partners, one of the largest coal producers in the US, said she would recuse herself from any UN discussions on coal.

But senators repeatedly questioned Craft about her views during the committee confirmation hearing, as she hedged on the degree to which fossil fuels drive the climate crisis, which the UN described last November as an "existential crisis."

Craft also faced questions about her extended absences from Canada during her tenure as ambassador.

Sen. Robert Menendez of New Jersey, the leading Democrat on the committee, noted that Craft was away from her post more than 300 days between October 2017 and June 2019.

Craft said she had been traveling for the trade negotiations with Canada and Mexico.

When Menendez pointed out that her absences continued well after the talks had concluded -- with Craft spending an average of 20 days a month outside Canada in the eight months since negotiations ended -- she said other conversations were required to iron out issues.

Later reports found that Craft spent the equivalent of seven of her 20 months as the US ambassador to Canada in the United States, in places where she had homes.

"We need another strong ambassador who will not only advocate for the US, but also be a staunch voice for global human rights and democracy," the Florida Republican said. "I have no doubt Ambassador Craft will faithfully represent the United States and I look forward to working with her as she assumes her new role."

According to the Federal Election Commission, Craft donated to Rubio in 2016, as well as to Republican Sens. Todd Young of Indiana and Ron Johnson of Wisconsin.

Craft was introduced at her confirmation hearing by Senate Majority Leader Mitch McConnell, a Kentucky Republican who on the morning of her hearing spent time on the Senate floor calling for the rollback of coal industry regulations.