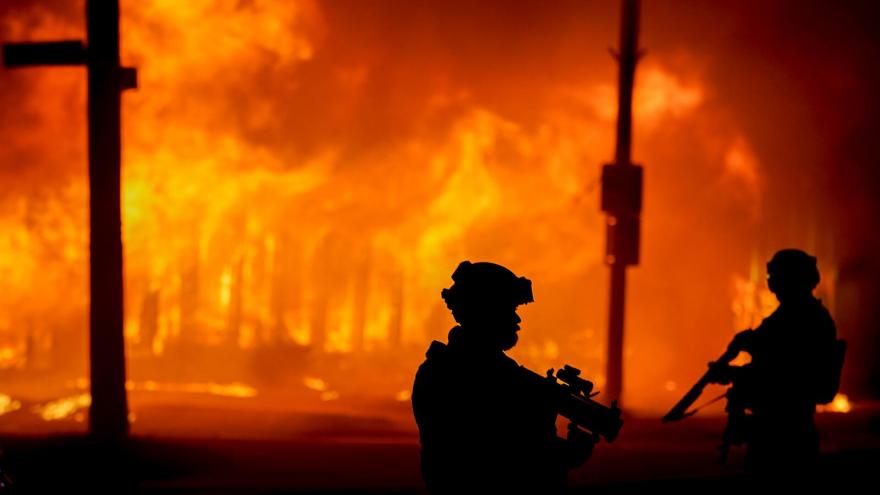 (CNN) -- Buildings and cars in Kenosha, Wisconsin, were set ablaze Monday night amid protests reignited by the police shooting of 29-year-old Jacob Blake.

Blake, a Black man, was shot multiple times in the back Sunday evening as he tried to enter an SUV through the driver's side door. In the vehicle were his 3-, 5- and 8-year-old children.

Following the shooting, police said officers rendered aid before the injured man was flown to a hospital in Milwaukee. He remained in intensive care late Monday, his attorney said.

Enraged demonstrators poured onto the streets after video of the shooting began circulating on social media, showing an officer grabbing on to the man's tank top. Seven shots are heard, followed by the sustained sound of a car horn. Two Wisconsin police officers have since been placed on administrative leave, and the police union has urged the public to withhold judgment until "all the facts are known."

The shooting comes after several months of nationwide protests demanding an end to police brutality and calling for justice in the killings of other Black Americans at the hands of police, including Breonna Taylor and George Floyd, whose death was also captured on camera and sparked hundreds of protests from coast to coast.

"If we don't have the systematic reform that this moment in America is crying out for, then we are going to continue to see hashtag after hashtag, protest after protest, and cities burning all across America," Blake's attorney, Ben Crump, said Monday.

Several businesses were on fire late Monday in Kenosha after demonstrators defied the 8 p.m. curfew authorities had set. Wisconsin Gov. Tony Evers announced National Guard members would also respond to the city to help "protect critical infrastructure, such as utilities and fire stations and to ensure Kenoshians are able to assemble safely."

"We will continue showing up until they're tired of killing us," one Manhattan protester told CNN affiliate WLNY.

Kenosha County District Attorney Michael Graveley said Monday an investigation into the shooting has kicked off but is at its "earliest stages."

"We're asked to make two determinations based on the evidence that is presented," Graveley said. "One, did any officer, in this case, commit any crimes, and two, are there any crimes that we believe were committed that we can prove beyond a reasonable doubt?"

"If those two things are concluded as a yes, then criminal charges would be brought at the end of that process."

That investigation will "allow this community to heal sooner because independent prosecuting agencies will be able to make determinations at the same time about whether any criminal charges will be produced," Graveley said.

'We see what we see'

Police say officers responded to a domestic disturbance call but it's unclear who called 911 or what happened before the recording of the incident begins. In a police call, a dispatcher says Blake "isn't supposed to be there" and that he took the complainant's keys and refused to leave. The dispatcher later explains she doesn't have more details because the caller was "uncooperative."

Crump, the attorney who also represents Floyd's family, said Blake was leaving the scene after "breaking up a fight between two women."

Raysean White, who filmed a video clip that's been viewed millions of times online, said he heard women arguing and saw Blake arrive and order one of his sons into the vehicle. Blake then walked into a home behind a woman, White said.

White, who was across the street, stepped away and said he saw police wrestling with Blake when he returned. He doesn't know what started the argument and began filming what he called the middle and end of the altercation.

The dispatcher's report of shots fired came about five minutes after the initial report. According to Crump, police had already used a Taser on Blake before the shooting. It's unclear from the video if both officers opened fire. The second officer has his gun out as the shots are heard, the video clip shows.

"As always, the video currently circulating does not capture all the intricacies of a highly dynamic incident. We ask that you withhold from passing judgment until all the facts are known and released," said Pete Deates, president of the Kenosha Professional Police Association.

'I had to pick up my camera'

White says it was when he saw the officers wrestling with Blake that he knew he needed to capture the scene.

After stepping away and coming back, White said he saw one of the officers Tasing Blake.

"It's disturbing to actually look out the window where I live and see this man get shot by the police seven times," White said. "It's highly disturbing to me, but I'm pretty sure Jacob's kids were more traumatized than anybody during the whole situation."

Justin Blake, uncle to Jacob Blake, said the man's family is hoping for a recovery.

"Thank God he's alive," he told CNN. "We're just praying for a great recovery, that he may have a great quality of life and that his father, my brother, can enjoy him."