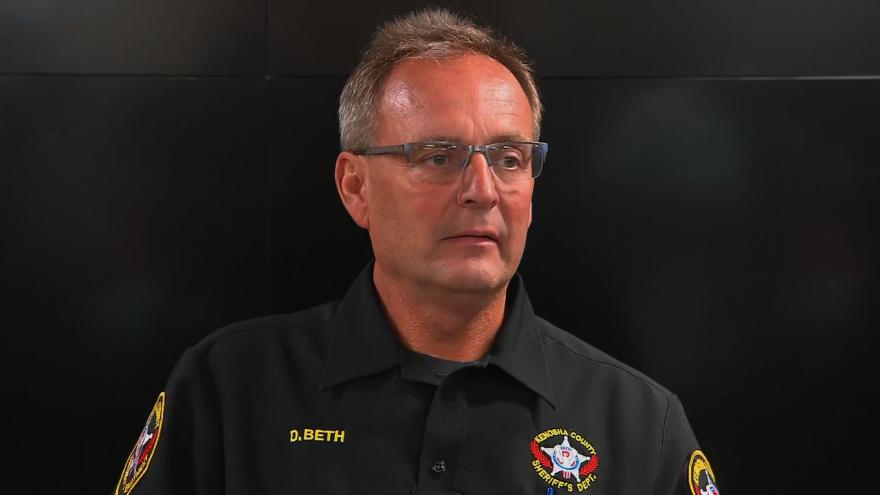 (CNN) -- A Wisconsin sheriff who has led the response to protests over the Jacob Blake shooting previously made some inflammatory comments involving Black suspects.

Kenosha County Sheriff David Beth addressed reporters in January 2018 following the arrests of five people for shoplifting at a Tommy Hilfiger outlet store in Pleasant Prairie, Wisconsin, and a high-speed chase that led to their arrests.

At least four of the suspects were Black, according to jail records. The fifth suspect was a minor, the sheriff's department said in a statement.

"I'm to the point that I think society has to come to a threshold where there's some people that aren't worth saving," Beth said at the news conference a day after the incident, according to CNN affiliate WTMJ. "We need to build warehouses, to put these people into it and lock them away for the rest of their lives."

"We put them away for the rest of their lives so that the rest of us can be better," Beth said.

He acknowledged several times during the news conference that he was not being politically correct.

The suspects were charged with retail theft and obstruction charges, the sheriff's department said.

CNN has reached out to the Kenosha County Sheriff's Department for comment.

Days after he made the comments, the sheriff issued an apology saying he should have kept his comments "directed toward the incident" and should have not "allowed my emotions to get the better of me."

"Even though my comments were not meant to offend people, I can see how they may have," Beth wrote in a statement.

Beth said it bothered him that the high speed chase ended when the suspects' car crashed into another vehicle. A 16-year-old who "had just obtained his driver's license minutes earlier" and his mother were in the other vehicle, the sheriff said.

"This 16 year old reminded me of my own daughter who just received her driver's license less than a month ago," Beth wrote in his apology.

At the time, the sheriff said he met with two members of the Kenosha NAACP and that he planned to work with state lawmakers "to strengthen penalties for those that break the law and place Kenosha's citizens in harm's way in the future."

The sheriff is among a group of law enforcement officials leading the police response to protests in Kenosha, Wisconsin, where Blake was shot multiple times by police earlier this week.

The American Civil Liberties Union called Thursday for the resignation of Beth and Kenosha Police Chief Daniel Miskinis, citing a "failed response" to Blake's shooting and the ensuing protests.

The protests have turned chaotic, with demonstrators, police and others clashing with each other and leading to the fatal shootings on Tuesday by suspect 17-year-old Kyle Rittenhouse.