Kentucky candle factory survivor said a supervisor told him he would be fired if he left ahead of the storm. A company spokesperson denied the claim 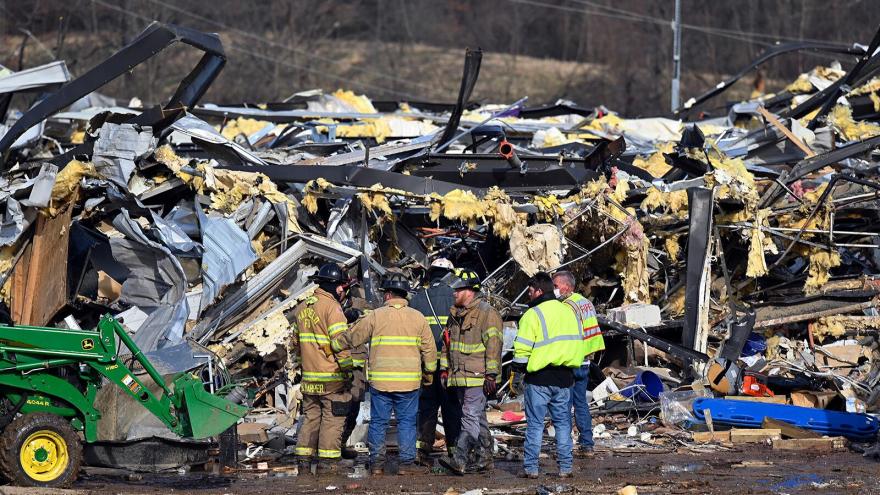 A man working at the Mayfield, Kentucky, candle factory demolished by a tornado Friday night told CNN as the storm closed in, a supervisor said he would be fired if he left.

(CNN) -- A man working at the Mayfield, Kentucky, candle factory demolished by a tornado Friday night told CNN as the storm closed in, a supervisor said he would be fired if he left.

Asked about the allegation, a spokesman for the company that owns the factory said the company had spoken with supervisors working that night, who all denied any employees were told they'd be fired if they left. Bob Ferguson, the spokesman, noted some employees did leave that night and employees are generally free to come and go without retribution.

A tornado -- one among a series of deadly twisters and storms that hit parts of the Midwest and South late last week -- ripped into the factory, killing at least eight people who were there.

More than 100 people were working at the time. The factory had been "going 24/7" in part to meet Christmastime candle demand, Rep. James Comer, R-Ky., who represents the area, told CNN.

Overall, at least 88 people were killed in the storms, including at least 74 in Kentucky, Gov. Andy Beshear said. More than 100 people were still unaccounted for as of Tuesday morning, the governor said.

McKayla Emery, another worker at the factory that night, corroborated Johnson's account, telling CNN she heard people ask a supervisor if they could leave, and the supervisor "told them word for word: 'If you sign out, you more than likely will get fired.'"

Another worker who survived the storm at the factory told CNN Tuesday he did not hear any supervisors threatening to fire workers who left.

"You can basically sign out so they know you're gone and leave it at any time," Jim Douglas said in an interview from his hospital bed.

On the night the tornado hit, Douglas said an interior wall fell on top of him, hitting him in the head and throwing him to the ground. He said he lay in pain, crushed beneath what he believes was about 15 feet of debris before rescue workers eventually reached him. He's now recovering from nerve damage and slowly gaining back the use of his arms and legs.

Douglas, who has worked at the factory for two and a half years, said he's been able to leave work early in the past without any repercussions. He said he thought about leaving as the storm approached but decided to ride it out at the factory after talking with his family.

State workplace safety inspectors are investigating the death of the eight workers at the candle factory, according to Holly Neal, chief information officer of the Kentucky Labor Cabinet. Beshear, the governor, said Tuesday such investigations are routine when fatalities occur in a workplace.

Asked about reports of employees being told they would be fired if they left the factory before the storm hit, Beshear said, "I haven't seen any direct accounts from the candle factory itself. That's something that obviously people are going to look at.

"I hope that they did everything right. If they didn't, then that information will come out," he added.