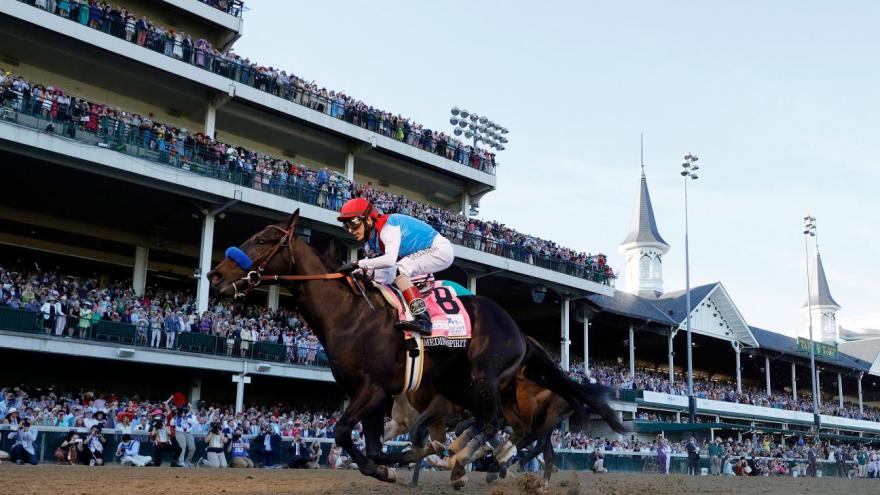 Medina Spirit crosses the finish line to win the 147th running of the Kentucky Derby on May 1. On June 1, Kentucky Derby winner Medina Spirit's failed positive drug-race test has been confirmed, according to trainer Bob Baffert's attorney Craig Robertson.

(CNN) -- Hall of Fame trainer Bob Baffert has been suspended from the home of the Kentucky Derby for two years after Medina Spirit's positive post-race drug was confirmed, the company that runs the Louisville racetrack said Wednesday.

Churchill Downs Incorporated (CDI) "has consistently advocated for strict medication regulations so that we can confidently ensure that horses are fit to race and the races are conducted fairly," said Bill Carstanjen, CEO of CDI. "Reckless practices and substance violations that jeopardize the safety of our equine and human athletes or compromise the integrity of our sport are not acceptable and as a company we must take measures to demonstrate that they will not be tolerated.

"Mr. Baffert's record of testing failures threatens public confidence in thoroughbred racing and the reputation of the Kentucky Derby. Given these repeated failures over the last year, including the increasingly extraordinary explanations, we firmly believe that asserting our rights to impose these measures is our duty and responsibility."

The suspension, which includes trainers directly of indirectly employed by Bob Baffert Racing Stables, is effective through the conclusion of the 2023 Spring Meet at Churchill Downs Racetrack, CDI said.

The Kentucky Horse Racing Commission (KHRC) has the sole authority to disqualify Medina Spirit as the winner of the Derby, the statement said.

"It is the understanding of CDI that the KHRC is pursuing the completion of its investigation of this matter in accordance with its rules and regulations," the statement said.

The New York Racing Association this month temporarily suspended Baffert from entering any horses in races at the track that is host to the Belmont Stakes.

The Belmont Stakes, the third race in thoroughbred racing's Triple Crown, is set to run Saturday at Belmont Park.

After the May 1 first leg of the famed Triple Crown, Baffert revealed that Medina Spirit had tested positive for elevated levels of betamethasone.

Betamethasone is an anti-inflammatory corticosteroid that is allowed in horse racing at a certain level. But Baffert said he was informed that Medina Spirit's postrace test detected 21 picograms per milliliter -- more than double the legal threshold in Kentucky racing.

Baffert would have a chance to appeal the confirmation of the original test result. If an appeal is unsuccessful, Medina Spirit would be stripped of the Kentucky Derby crown as well as the winning prize money.

The last winning horse to be disqualified from the Kentucky Derby after failing a drug test was Dancer's Image in 1968.

Churchill Downs said in a statement in May, "if the findings are upheld, Medina Spirit's results in the Kentucky Derby will be invalidated and Mandaloun will be declared the winner."

In a statement to CNN on Wednesday, Robertson said, "Medina Spirit split sample confirmed the finding of betamethasone at 25 picograms. There is other testing that is being conducted, including DNA testing. We expect this additional testing to confirm that the presence of the betamethasone was from the topical ointment, Otomax, and not an injection.

"At the end of the day, we anticipate this case to be about the treatment of Medina Spirit's skin rash with Otomax. We will have nothing further to say until the additional testing is complete."

In a statement, Marty Irby, executive director at Animal Wellness Action, said Wednesday: "The news of Medina Spirit's second test confirmed positive is no shock. Churchill Downs, the Kentucky Derby, and the Kentucky Horse Racing Commission must stand firmly together in agreement to take the 2021 Derby title away from Bob Baffert and the horse."

Medina Spirit won the Kentucky Derby in May in a close finish. The win delivered Baffert a record seventh Derby victory.

Baffert revealed a week later that the horse had tested positive for elevated levels of the anti-inflammatory corticosteroid sometimes used to relieve joint pain in horses -- putting the 3-year-old colt's Derby win in jeopardy.

The trainer later provided a lengthy statement on what he said happened regarding Medina Spirit.

"Following the Santa Anita Derby, Medina Spirit developed dermatitis on his hind end. I had him checked out by my veterinarian who recommended the use of an anti-fungal ointment called Otomax. The veterinary recommendation was to apply this ointment daily to give the horse relief, help heal the dermatitis and prevent it from spreading," part of Baffert's statement said.

"While we do not know definitively that this was the source of the alleged 21 picograms found in Medina Spirit's post-race blood sample, and our investigation is continuing, I have been told by equine pharmacology experts that this could explain the test results. As such, I wanted to be forthright about this fact as soon as I learned of this information," the statement added.

It was not Baffert's first run-in with reports that his horse failed a drug test: In April, according to multiple reports, including the Arkansas Democrat-Gazette, the Arkansas Racing Commission upheld a ruling that two of Baffert's horses had tested positive for lidocaine beyond the accepted levels. However, the commission dropped a 15-day suspension for Baffert.

Baffert alluded to previous controversies recently -- "I don't feel safe to train," he said -- but cast the allegation about Medina Spirit as an issue with the broader horse racing industry, saying the industry "needs to step up and we need to do a better job in racing."

"I'm not a conspiracy (theorist) -- I know everybody's not out to get me. But there's definitely something wrong. Why is it happening, you know, to me?" he asked. "There's problems in racing, but it's not Bob Baffert."