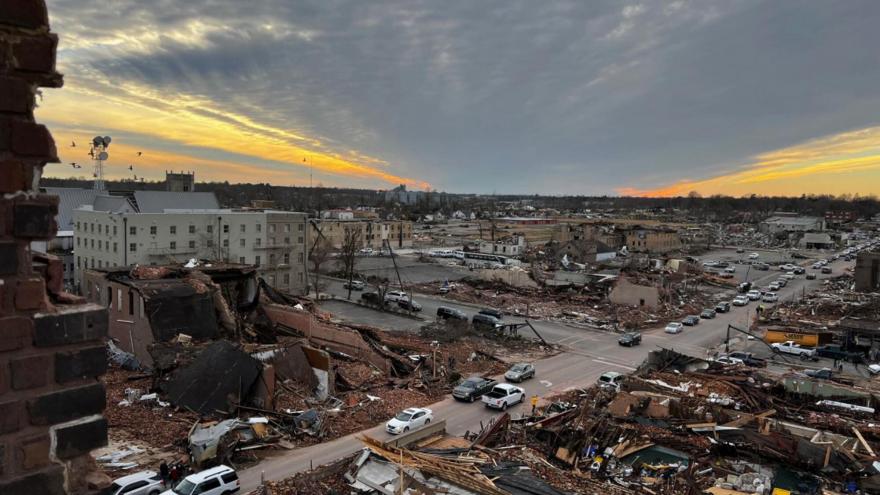 (CNN) -- Shawn Triplett knew there was a desperate need to help the children of Mayfield, Kentucky, after a deadly storm wiped out most of the town.

"I've been deployed three times, I've seen war zones, I've seen absolute destruction, and nothing compared to it. I mean, the whole town was just leveled," he said in an interview with CNN.

Seeing devastated families at a local shelter, Triplett -- a Mayfield resident and former Marine who served three tours of duty in Iraq and Afghanistan -- organized a donation drive through social media to purchase gifts for those in need.

The first trip to a nearby Walmart filled carts to the brim, with $2,000 spent on toys for children. The next day, thanks to the generosity of friends and strangers alike, he went back for more.

"It just really blew my mind," he said. "The support has just been astronomical."

Mayfield was one of the towns hardest hit after a line of storms crossed the central US on Friday night and Saturday morning. At least eight people died after a tornado leveled the local candle factory, and most of the town of 10,000 people is in ruins.

Overall, 74 people died in Kentucky, out of the 88 people who lost their lives across five states, according to officials.

'They're sleeping on cots'

Triplett remembers how he felt when he came across what was left of the Legion Theatre, a historic building in the heart of the town.

Inside the building, a view from the seats toward the stage showed daylight pouring in where a wall once stood.

"It was the whole spectrum of emotions. I felt pain, I felt sadness, depression and anger all at once," he said. "I wish there was a word to describe it. That moment of trauma, it just builds up and then it just kind of hits you."

Triplett told CNN he was in Chicago that Friday night. Concerned over weather reports and how their home may fare, his wife and two young children were in a hotel room in nearby Paducah, riding out the storms and ultimately out of the path of the tornadoes.

Able to return home the next morning, Triplett was shocked by how the town was destroyed and wanted to help however he could. He arrived at the volunteer center, where he was asked to guide a photo-journalist through streets littered with debris.

That night, the two returned to shelters where residents without homes were staying. They saw families stunned by the catastrophe, he said, including one woman consoling her son over their lost Christmas.

"It was very heartbreaking. It was way too much for me to handle," he said.

Restless that night after what he had seen, Triplett decided more needed to be done for the children.

"That shelter was full of kids that had nothing but the clothes on their back and they're sleeping on cots," he said.

Noticing that rations and supplies available were for essentials such as generators and bottled water, he turned to his friends on social media for donations so that he could go to Walmart and purchase toys and gifts for the children.

Around $2,000 were raised, and the store gave Triplett a discount upon learning of his efforts. As word spread on websites such as Reddit, more donations poured in.

He was able to return the following day and another $6,000 was spent on toys, board games and backpacks, he said. Forty pairs of shoes were also picked up at a local Shoe Sensation.

Triplett and other volunteers will wrap and distribute the toys for any child or family in need. He credits the kindness of everyone who pitched in to try and get families back on their feet right before the holidays.