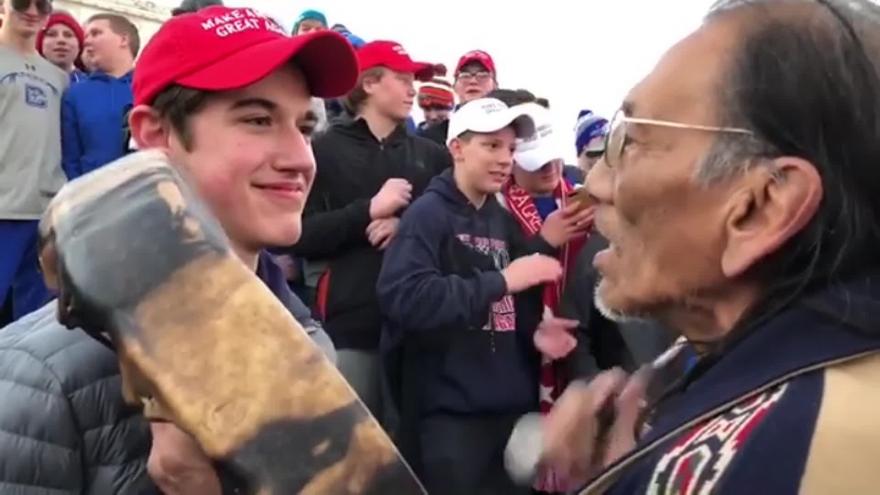 (CNN) -- A Kentucky high school under scrutiny after students faced off with a Native American elder is closed Tuesday "to ensure the safety of students," according to Kenton County Commonwealth's Attorney Rob Sanders.

On Monday, Sanders said officials at Covington Catholic High School in Park Hills met with local law enforcement to come up with a plan to ensure student safety. Sanders told CNN the move came after threats against the school and some students in the wake of an incident captured in a viral video over the weekend at the March for Life in Washington.

"After meeting with local authorities, we have made the decision to cancel school and be closed on Tuesday, January 22, in order to ensure the safety of our students, faculty and staff," says a letter from school principal Robert Rowe that was posted on CNN affiliate WKRC's website.

"All activities on campus will be canceled for the entire day and evening. Students, parents, faculty and staff are not to be on campus for any reason. Please continue to keep the Covington Catholic Community in your prayers," Rowe wrote.

Other schools in the area are also closed due to inclement weather, and Covington Catholic does appear on WKRC's school closure list. But the weather is not mentioned in the principal's statement.

The decision to cancel school comes days after a group of Covington students, many wearing Make America Great Again hats, got into a confrontation with Omaha tribe elder Nathan Phillips during the school's annual trip to the March for Life rally in Washington.

Phillips said he was there for the Indigenous Peoples March. When he saw an escalating situation between the students and another group, he decided to step in between them, leading to the face-off with one student.

The student in the video, Nick Sandmann, denied characterizations of his and his classmates' behavior and said he was simply standing in front of Phillips to let him know he wouldn't be baited into an altercation.

A second video surfaced Sunday showing another group, which identifies itself as members of the Hebrew Israelites, taunting students with disparaging and vulgar language before the encounter with Phillips.

In a separate letter to parents, Rowe said an independent third party investigator will look into the incident.

Peace vigil a 'call for an end to racism'

The American Indian Movement Chapter of Indiana and Kentucky held a "peace vigil to call for an end to racism" on Tuesday morning at the Diocese of Covington.

"We are here to have a dialogue with the diocese, asking them to hold those chaperones accountable," Thomas Pearce, the group's co-chair, told CNN at the vigil. "That should have never happened in D.C. If the chaperones were doing their jobs, that wouldn't have (ever) happened."

Pearce said the diocese has not responded to the group's request to meet. CNN has reached out to the diocese and has not heard back.

Guy Jones of the Hunkpapa Lakota from the Standing Rock Reservation in South Dakota said the main goal is education.

"We fix stuff by sitting down and talking to one another and working for a common goal," said Jones, who lives in Dayton, Ohio, and is part of the Greater Cincinnati Native American Coalition.

"That's what we're looking for. Let's find that common ground that we can all work together and make something better."