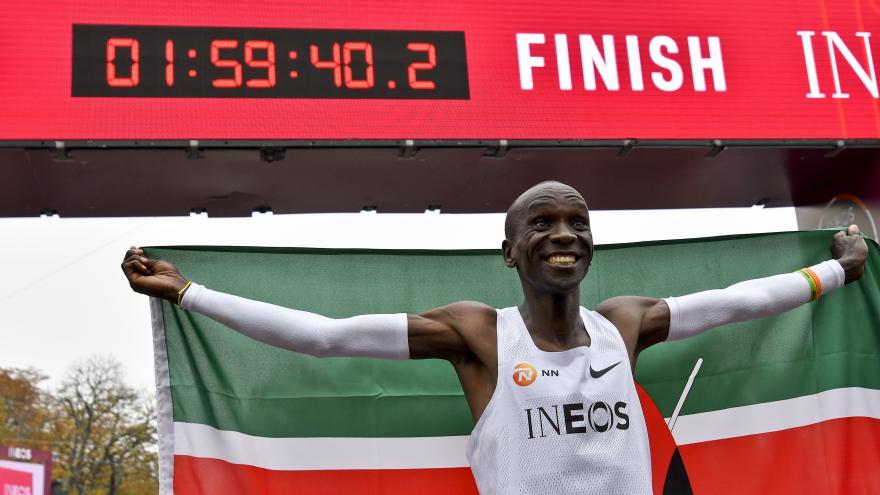 (CNN) -- Kenya's Eliud Kipchoge has successfully completed the first ever marathon under two hours in the Austrian capital of Vienna, two years since he fell 25 seconds short.

The 34-year-old ran the 26.2 miles in 1 hour, 59 minutes and 40 seconds at Vienna's Prater-Hauptallee (main avenue) -- an achievement considered one of the ultimate milestones in athletic performance.

"I am the happiest man," Kipchoge said after the unofficial two-hour marathon, adding that he hopes to have inspired many that "no human is limited."

Kipchoge was on target to break the record during the first half of Vienna's Prater Park on Saturday, after completing 21 kilometers in 59.35 minutes.

Kipchoge's first crack of going sub-two hour in Monza, Italy, was part of Nike's Breaking2 project. This time he was being backed by petrochemical company Ineos in an attempt called the 1:59 Challenge.

Despite the achievement, the milestone won't count as a world record. In fact, Ineos hasn't even submitted a request to the IAAF for the attempt to be officially ratified.

During the race, Kipchoge followed behind a car -- a condition not allowed under IAAF sanctions -- and was assisted by an army of 30 pacemakers.

Kenya's President Uhuru Kenyatta congratulated Kipchoge in a tweet after the marathon: "You've done it, you've made history and made Kenya proud while at it.

"Your win today, will inspire tens of future generations to dream big and to aspire for greatness," Kenyatta added.

Speaking before the marathon, Kipchoge said he was aware that there were critics of the manufactured conditions surrounding the attempt.

"The law of nature cannot allow all human beings to think together," the reigning Olympic marathon champion said. "In breaking the two-hour barrier, I want to open minds to think that no human is limited. All our minds, all our thoughts are parallel. But I respect everybody's thoughts."

He added that the 1:59 Challenge is different to competing in a race like the Berlin Marathon, where he set the current world record in 2018.