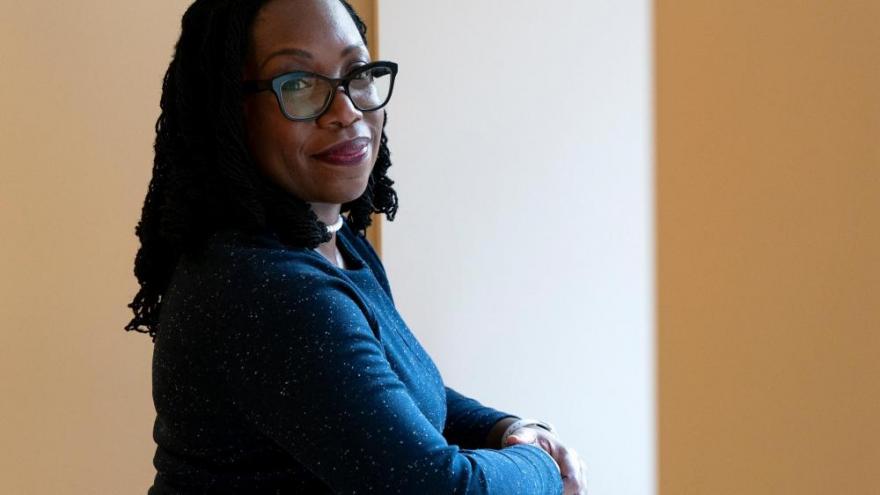 "There's no reason to wait on this," said Sen. Dick Durbin, an Illinois Democrat and chairman of the Judiciary Committee, who was among the four senators who sat down with Jackson on her first day of meetings on Capitol Hill.

For her historic nomination as the first Black woman on the nation's highest court, Jackson will be formally introduced during televised hearings on March 21, followed by two days of questioning and one day of testimony from additional witnesses.

As she walked through the Capitol on her first day of meetings Wednesday, Jackson beamed and said the conversations with senators were "good, thank you!"

She began her day in separate morning meetings with Senate Majority Leader Chuck Schumer, a Democrat from New York, and Senate Minority Leader Mitch McConnell, a Kentucky Republican. Later, Jackson also met with Durbin and Chuck Grassley, an Iowa Republican and the top Republican on the Judiciary Committee.

Leaving his meeting with Jackson, Schumer told reporters: "I said she was brilliant and beloved. I'd add a third B -- belongs. She belongs on the court."

Durbin pushed back against suggestions from some Republicans that the confirmation process to fill the seat of Justice Stephen Breyer was being rushed, even though he intends to stay on the bench until the current term ends this summer.

He said her hearings would be "fair, timely and professional." Yet he noted the 50-50 split in the Senate underscored the sense of urgency surrounding Jackson's nomination.

He also noted that Jackson appeared before the Judiciary Committee less than a year ago, when she was elevated to the Court of Appeals for the DC Circuit, so there isn't as much new ground to cover. For Barrett, it had been three years between her initial confirmation to the federal bench and her Supreme Court hearing.

As Grassley welcomed Jackson into his office for the final meeting of the day, he pledged to ensure that Republicans would treat her fairly -- unlike, he said, how some Democrats treated Judge Brett Kavanaugh during his hearings in 2018 that devolved into a bitter partisan feud over allegations of sexual assault.

"One of the things that would be my responsibility as leader of the Republican on this committee, is to make sure that we have a fair process, a dignified process," Grassley said, "and that we will make sure that it's, that we don't repeat some of the mistakes that were made by other people in the Kavanaugh hearing."

Jackson listened and smiled as Grassley spoke, but did not say a word.

Former Democratic Sen. Doug Jones of Alabama, who was selected by the White House to help guide Jackson through the confirmation process, accompanied her to meetings on Wednesday. A small group of White House lawyers and aides were also on hand.

"It was a very good day of pleasant meetings," Jones told reporters after her final meeting. "I think it's going to be very respectful, regardless of what may have happened in the past."