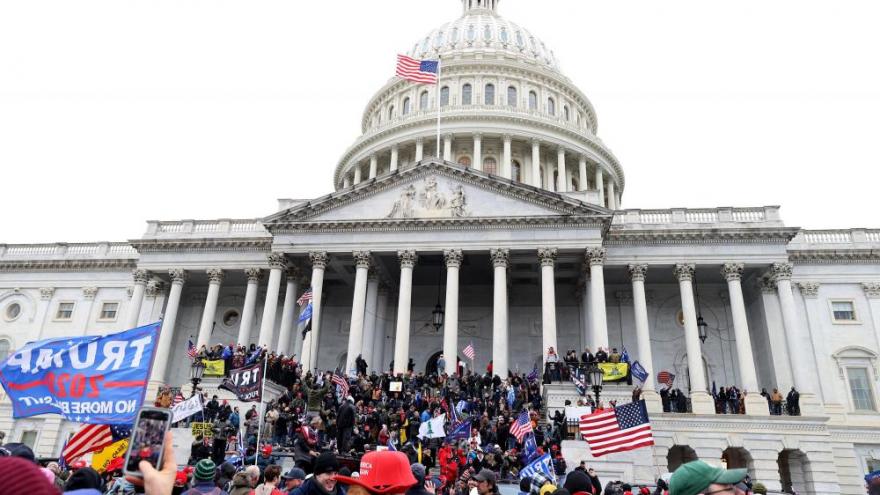 Protesters gather on the U.S. Capitol Building on January 06, 2021 in Washington, DC.

(CNN) -- The US Justice Department detailed for the first time on Tuesday the scale of its investigation into last week's US Capitol breach as officials vowed to hold all participants that broke the law accountable.

The acting US attorney in Washington, DC, Michael Sherwin, told reporters that the agency is at the onset of "a long term investigation" that "is not going to be solved overnight."

"This is only the beginning."

Here are the key takeaways from Tuesday's news conference:

More than 170 subject files have been opened

Officials have opened more than 170 subject files -- meaning individuals identified as persons who potentially committed crimes -- on rioters from the Capitol.

Sherwin said this includes individuals who potentially committed crimes inside or outside the Capitol grounds. He added that he anticipates the number of opened subject files "to grow to the hundreds in the next coming weeks."

DOJ has charged 'over 70 cases'

Of the 170 subject files that have been opened so far, Sherwin said the Justice Department has charged over 70 cases. That number too, Sherwin said, is expected "to grow into the hundreds" as the investigation unfurls.

The agency is looking at 'sedition and conspiracy charges'

On the types of cases that the Justice Department is charging, Sherwin said, the "gamut of cases" and misconduct that they're looking at "is really mind-blowing."

This includes "significant felony cases tied to sedition and conspiracy," he said. Those charges would carry prison terms of up to 20 years.

Looking at those charges is a "strike force" in the DC US Attorney's Office, Sherwin added.

"Their only marching orders," he said, are to build sedition and conspiracy charges related to "the most heinous acts that occurred in the Capitol, and these are significant charges that have felonies with a prison terms of up to 20 years."

There was 'open-handed combat' with police officers

Sherwin said Tuesday the Justice Department has put an emphasis on looking into rioters who engaged in "open-handed combat" with police officers during the breach.

A clearer picture of what happened inside the Capitol, Sherwin said, is "going to come into laser focus I think over the next weeks and days, and I think people are going to be shocked with some of the egregious contact that happened within the Capitol."

FBI assistant director Steven D'Antuono, who spoke alongside Sherwin at Tuesday's news conference, said the FBI is pursuing information about a person or people who helped to plant pipe bombs outside the Republican and Democratic headquarters last week.

D'Antuono said the bombs were real -- and had timers.

"We don't know exactly why they didn't go off," he added.

D'Antuono also said the agency is considering keeping those who attacked the Capitol last week from boarding planes by adding them to the federal no-fly list.

Asked by CNN's Evan Pérez about the step, D'Antuono said: "As for the no-fly list, we look at all tools and techniques that we possibly can use within the FBI and that's something we are actively looking at."

Looking at attacks against the press

Investigators are also looking at attacks from rioters specifically against journalists, Sherwin said.

"Some people aren't familiar that some of those rioters specifically targeted members of the media and assaulted them," he said. So we have assigned specific prosecutors in our office to focus on those cases as well. And I'm naming all these different strike forces to just emphasize regardless of who the victim was, regardless of who the perpetrator was, we're treating all of these cases equally."