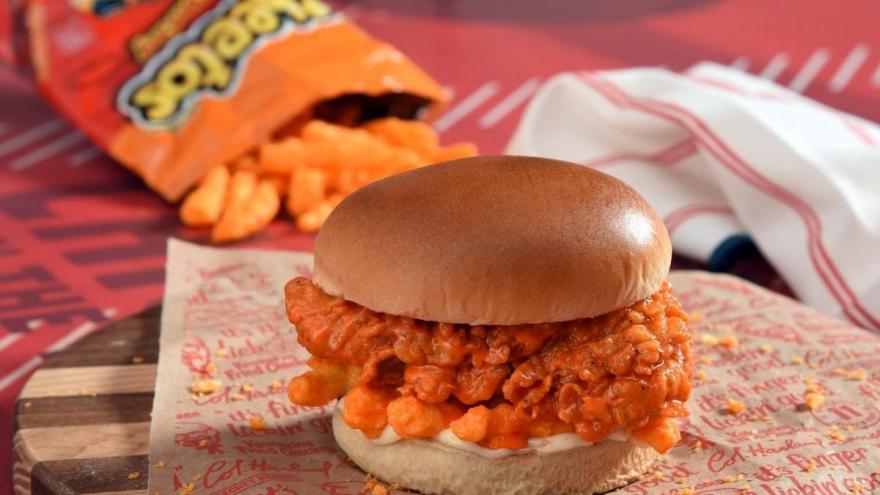 (CNN) -- For four weeks starting July 1, KFC and Cheetos will marry their signature fare in a new collaboration that sprinkles magical, orange Cheeto dust on a chicken sandwich.

In a win for advocates of chips on sandwiches, the KFC Cheetos Sandwich drenches KFC's crispy fried chicken in a "special Cheetos sauce" on top of a bed of Cheetos.

Kentucky Fried Chicken's own Colonel Sanders tweeted on Thursday that he was "finger lickin' thrilled" to announce the mashup.

Chester Cheetah echoed the sentiment with a birth announcement for the companies' Frankenfood.

It's the latest development in fast food's love affair with the crunchy cheese-flavored snacks.

In June 2016, Burger King launched Mac n' Cheetos, which stuffed fried mac and cheese into the shape of a Cheeto puff, and Cheetos Chicken Fries.

The former became so popular that it returned in the summer of 2017 with a comeback commercial with the Burger King and Chester Cheetah superimposed onto Mark Morrison in the video for his 1996 song, "Return of the Mack."

There's even a frozen version of the Mac n' Cheetos available at Walmart for those who prefer to coat their fingers in Cheeto dust in the comfort of their own home.

New York fans of this whole idea can taste an even more exciting line up that includes "Cheetos-Fied KFC Hot Wings," "Cheetos Loaded Fries" and "KFC Mac and Cheetos Bowl," all slathered in Cheetos sauce and a Cheeto dust finish, at a pop-up party at KFC's downtown location on July 27 from 4 to 8 p.m.