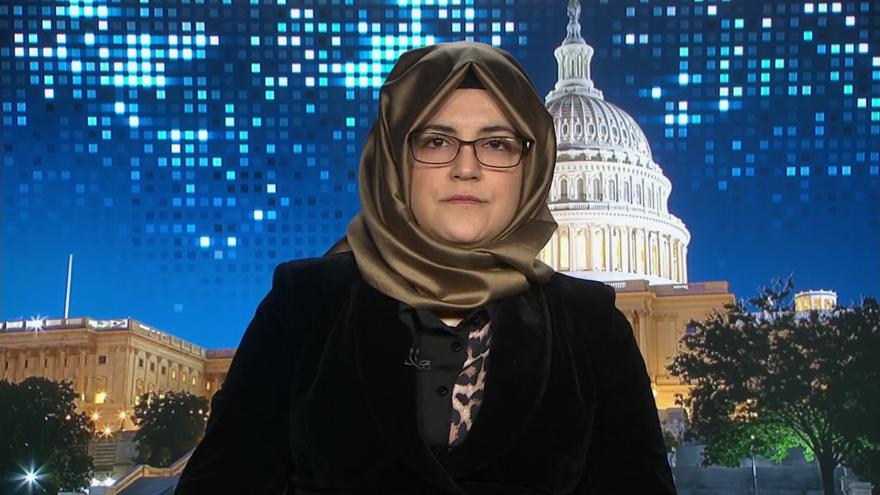 Hatice Cengiz, fiancée of the late Saudi journalist Jamal Khashoggi, has told the White House that she is now prepared to meet with President Donald Trump. Source: CNN
By Zachary Cohen, CNN

(CNN) -- Hatice Cengiz, fiancée of the late Saudi journalist Jamal Khashoggi, has told the White House that she is now prepared to meet with President Donald Trump.

Trump invited Cengiz to the White House shortly after Khashoggi's murder, but she rejected the invite at the time, telling Turkish TV that she did not believe that the US President genuinely wanted to get to the bottom of her fiancée's death.

"Communication has been sent to the White House stating that I have accepted the invitation by the President," Cengiz told CNN's Christiane Amanpour Thursday.

Cengiz is currently in Washington to testify before a House subcommittee.

"Before I can go and visit him, President Trump needs to renew his invitation," she said. "I'd like to meet him. I'd like to tell him what my relationship with Jamal was like at the time."

Khashoggi, who worked for The Washington Post, was murdered in October 2018 in the Saudi embassy in Turkey.

Riyadh has maintained that Saudi Crown Prince Mohammed bin Salman was not involved in the operation to target Khashoggi. US officials, however, have said such a mission -- including 15 men sent from Riyadh -- could not have been carried out without the authorization of bin Salman.

Trump has come under pressure from Congress and others to hold Saudi Arabia accountable over the Khashoggi case. But Trump, an ally of the 33-year-old heir, has so far shown no interest in investigating allegations of bin Salman's involvement, saying: "Maybe he did, maybe he didn't."

US sanctions have been imposed on 17 Saudi individuals, but not bin Salman.