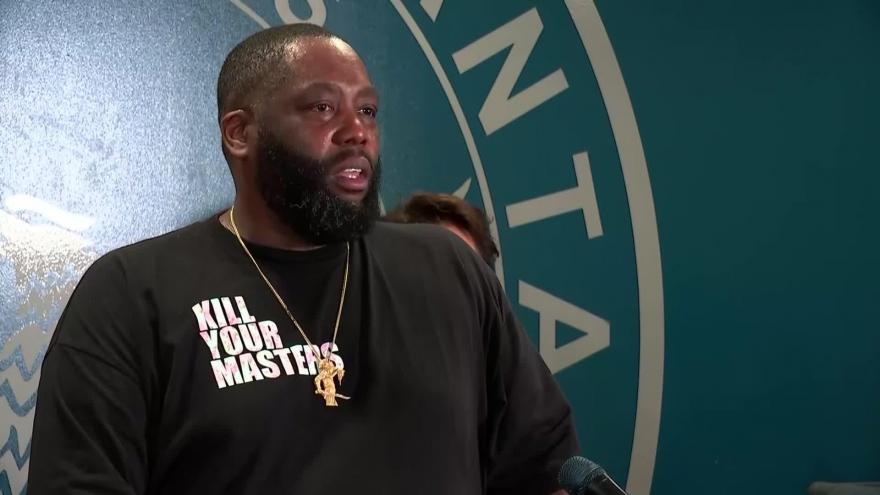 Rapper Killer Mike spoke Friday night amid protests in Atlanta. The rapper and businessman pointed to Atlanta's civil rights history as the home of Martin Luther King Jr. and others who have struggled for equality over the decades.

(CNN) -- Killer Mike made an emotional plea for calm Friday night as a protest in Atlanta against police brutality turned violent.

The demonstration started peacefully, but some protestors broke storefront windows, torched cars and vandalized CNN headquarters. Atlanta was one of several US cities that witnessed protests over the death of George Floyd at the hands of a Minneapolis police officer.

"I am the son of an Atlanta police officer," said the rapper and activist, who was joined at a press conference by Mayor Keisha Lance Bottoms, Police Chief Erika Shields and fellow Atlanta rap star T.I. "My cousin is an Atlanta city police officer. And my other cousin an East Point police officer."

"And I got a lot of love and respect for police officers, down to the original eight police officers in Atlanta," he said, an apparent reference to the city's first black officers, hired in 1948, who he said were forced to dress in a separate building because white officers rejected them.

Killer Mike and T.I. pointed to Atlanta's civil rights history as the home of Martin Luther King Jr. and others who have struggled for equality over the decades.

"I watched a white police officer assassinate a black man," Killer Mike said while crying, referring to Floyd's death. "And I know that tore your heart out."

The officer, since fired, is seen in a video with his knee on Floyd's neck. He has been charged with murder and manslaughter.

"It is time to beat up prosecutors you don't like at the voting booth," he added, as he wore a T-shirt that read "Kill Your Masters," a lyric from one of his rap group's songs. "It is time to hold mayoral offices accountable, chiefs and deputy chiefs."

"I'm mad as hell. I woke up wanting to see the world burn down yesterday because I am tired of seeing black men die," he said. "We want to see the system that sets up for systemic racism burned to the ground."