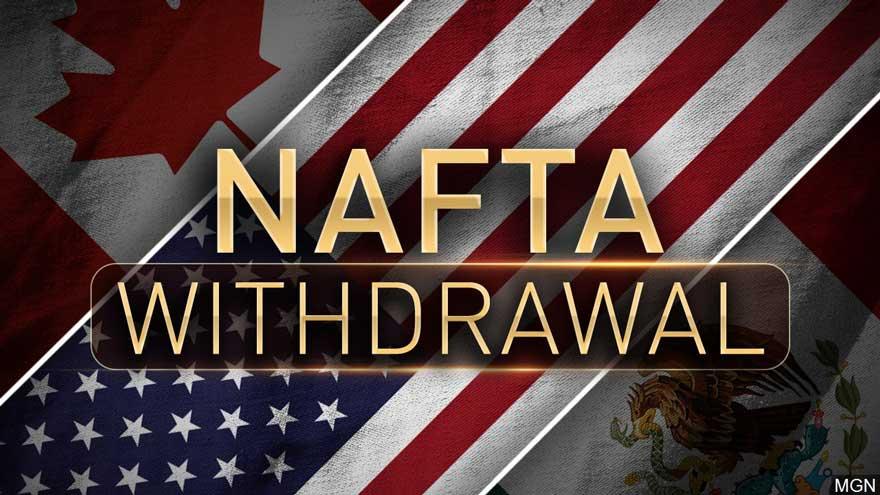 It would cost the United States 300,000 jobs, cut economic growth, hurt stocks and cause prices for consumer goods to rise, according to an analysis.

Oxford Economics, a global consulting firm associated with the English university, published the report a week before the sixth round of talks on NAFTA, the trade agreement between the United States, Mexico and Canada.

The 300,000 jobs would represent a setback of about two months of job growth at the economy's current pace. About 14 million American jobs depend on trade with Mexico and Canada, according to the U.S. Chamber of Commerce.

If Trump decides to pull out, he has to give six months' notice. Oxford assumes the job losses won't come until 2019.

Negotiators from all sides meet next week in Canada to resume NAFTA talks. The first five rounds have yielded no major progress on divisive issues such as how and where cars are manufactured.

Trump has made it clear that if the United States can't get the deal it wants, he will withdraw from the agreement, which has been law since 1994.

In such a scenario, U.S. economic growth would be slower in 2019 -- 1.5%, compared with 2% if NAFTA is left in place, according to Oxford. The Federal Reserve estimates growth this year will be 2.5%.

Business investment growth would also slow because of concerns about protectionist trade measures from the White House, the analysis says.

And Oxford economist Oren Klachkin forecasts that investors would put their money into less risky assets like bonds and ditch stocks, causing the S&P 500 to be 5% lower than it otherwise would be.

To be sure, Canada and Mexico would feel the pain, too.

Oxford estimates that the Mexican peso would drop 8%, which would put it at an all-time low, and the Canadian dollar would decline 2.5%.

The Mexican and Canadian economies rely much more on trade, and could lose a larger share of jobs and investment compared with the United States.

Without a free trade deal, Canada and Mexico would raise their tariffs on American products more than the United States would charge for Mexican or Canadian goods entering America.

Every country has something called "most favored nation" tariffs, established by the World Trade Organization. Developing countries like Mexicoare allowed to have higher tariffs than developed countries like the United States to remain competitive.

Oxford's scenario does not assume that Trump would slap a 35% tariff on Mexican exports, as he threatened during his campaign.

Higher tariffs across the region would cause imports and exports to decline and prices to rise for consumers.

Oxford estimates that the U.S. economy would recover from the NAFTA-related hit by 2020 as businesses adjust to the new reality.

But Mexican leaders warn there would be far-reaching consequences in immigration. They think ending NAFTA would push more Mexicans to seek work illegally in the United States.

It would also be a major rupture in U.S.-Mexican diplomatic relations. It was American leaders who lobbied their Mexican counterparts in the 1990s to sign the agreement in the first place and lower its trade barriers.

The White House did not respond to CNNMoney's request for comment.