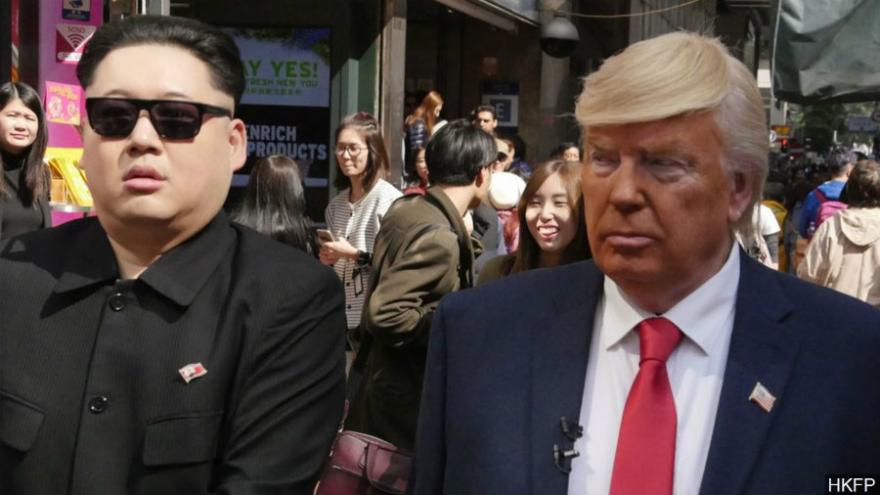 SINGAPORE (AP) — A Kim Jong Un lookalike was detained and questioned upon his arrival in Singapore on Friday, days before a summit between the North Korean leader and President Donald Trump.

The Hong Kong-based impersonator, who uses the name Howard X, is in the city-state for summit-related promotions by a mall and seafood restaurant.

He said the police officers who stopped him at Singapore's Changi Airport searched his bags and questioned him for about two hours before letting him go. He said he was told to stay away from Sentosa Island and the Shangri-La Hotel.

Kim and Trump are to meet Tuesday at the Capella Hotel on Sentosa Island and Trump is expected to stay at the Shangri-La during his visit to Singapore.

The impersonator, whose real name is Lee Howard Ho Wun, said police asked if he had been involved in protests around the world, including those by pro-democracy activists in Hong Kong. He said he told them he had been at the scene of Hong Kong demonstrations as a musician playing the drums.

"However, I never rioted and don't plan to ever riot. I told him (police officer) that I ... would never do this in Singapore because it is against your rules to protest," Lee told The Associated Press.

In a statement, Singapore's Immigration and Checkpoints Authority said Wun was interviewed for about 45 minutes.

"As part of the immigration clearance process, travelers to Singapore may be subject to additional interviews and/or screening. These procedures are conducted at all Singapore's checkpoints," the authority said.

Demonstrations in Singapore can only be held in a designated area, the 2.4-acre (0.9-hectare) Hong Lim Park, and require park approval. All other gatherings require a police permit.

"I'm here to stay. I don't think they will try and kick out the president. It wouldn't be good press for Singapore," Lee said.

"Nobody started talking about a meeting between Kim Jong Un and President Trump until we suggested it at the Olympics," Alan added, referring to their appearance at the Pyeongchang Winter Olympics in February.

"It all started with us. If there's a peace prize that anybody should get, we should get it," he quipped.

Indonesian Janette Warokka thought the impersonators were the real deal.

"It's so shocking for me. I don't know why those two famous guys come here," she said.

Raul Rio, a teacher from Texas, managed to take a selfie with the pair. "They certainly look like the real ones. It was fun to see them," he said.

This story has been corrected to show demonstrations in park require park approval and other gatherings require a police permit.