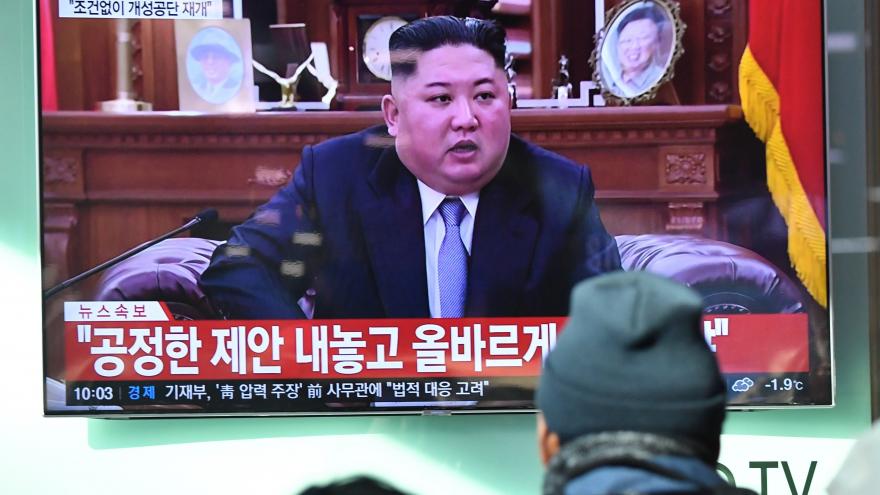 (CNN) -- North Korean leader Kim Jong Un affirmed his apparent commitment to denuclearization during an annual New Year's address Tuesday, but warned that he may need to pursue "a new way" if the United States continues to make "one-sided demands" of Pyongyang.

In a wide ranging, 30-minute speech, Kim said that relations with Washington would progress at a "fast speed" if the US engages in some form of give-and-take, adding that he was ready to meet with US President Donald Trump at any time.

"I'll endeavor towards a result that will be welcomed by the international community," Kim said of the potential second meeting between the two leaders.

North Korea, however, would have "no choice but to defend our country's sovereignty and supreme interest, and find a new way to settle peace on our peninsula," if the US "misinterprets our people's patience, and makes one-sided demands and continues down the path of sanctions and pressure on our republic."

Kim did not elaborate on what he meant by "new path."

The annual speech, essentially North Korea's version of the US State of the Union, is intended mostly for a domestic audience. Though it is dominated by issues viewed as mundane by international observers, it offers key clues into Kim's thinking and Pyongyang's plans for the upcoming year.

This year's address was marked by a change in appearance, with Kim choosing to deliver the speech sitting in a leather armchair in a study with paintings of his father and grandfather in clear view behind him. Last year, he delivered the speech behind a lectern.

In keeping with the last two years, Kim opted to wear a Western suit with pinstripes and a gray tie, eschewing the collarless formal attire he usually wears in public.

"His overarching message was confident, normal, sophisticated ... reminiscent of the feel as the Singapore summit setting, wearing a suit and tie," said Duyeon Kim, an adjunct fellow at the Center for a New American Security.

"But he still sent a very firm word of caution, bordering a nuanced threat, that if Washington doesn't keep its Singapore promise and continues with sanctions, then he has Plan B in mind and will go his separate way. He's exuding confidence that his country isn't hung up over the US, that they can still prosper without Washington."

Kim's declaration that his country would no longer "create, test, use, or proliferate nuclear weapons" comes just months after he announced that North Korea's quest for nuclear weapons was "complete" and that it "no longer needs" to test its weapons capability.

The Trump administration has maintained it will not give ground on sanctions until North Korea gives up its nuclear weapons, but Pyongyang has called upon the US to alleviate sanctions following moves by Pyongyang to dismantle part of its nuclear program.

"If the US responds to our initiative and preemptive efforts by taking reliable and corresponding practical action, our relationship will continue to progress at an excellent and great speed through the process of taking more concrete and groundbreaking measures," Kim said.

North Korea did not conduct any weapons tests in 2018. It also agreed to dismantle a satellite launch facility and destroyed the tunnels at its former nuclear weapons test site.

Kim has previously said he would close the Yongbyon nuclear facility, where North Korea is believed to produce fissile material for nuclear weapons, if Washington takes what it calls "corresponding measures."

However, weapons experts say those moves are largely cosmetic and easily reversible.

The young North Korean leader also called on Washington and Seoul to end the joint military drills between the two countries.

Trump agreed to scale down the drills after his June summit with Kim in Singapore, citing their cost and calling them "provocative" -- the same language used by the North Koreans, though US and South Korean defense officials maintain the military exercises are defensive in nature. North Korea has long viewed them as practice for an eventual invasion.

At the time, critics accused the Trump administration of making a major concession to the North Koreans without getting Pyongyang to sign on to anything specific.

North Korea committed "to work toward complete denuclearization of the Korean Peninsula," a vague term that experts say Washington and Pyongyang interpret differently.

It has not agreed to any timeline to give up its nuclear weapons and ballistic missiles, nor has it committed itself to declaring its weaponry and key weapons facilities -- steps that experts say are crucial in any disarmament talks.