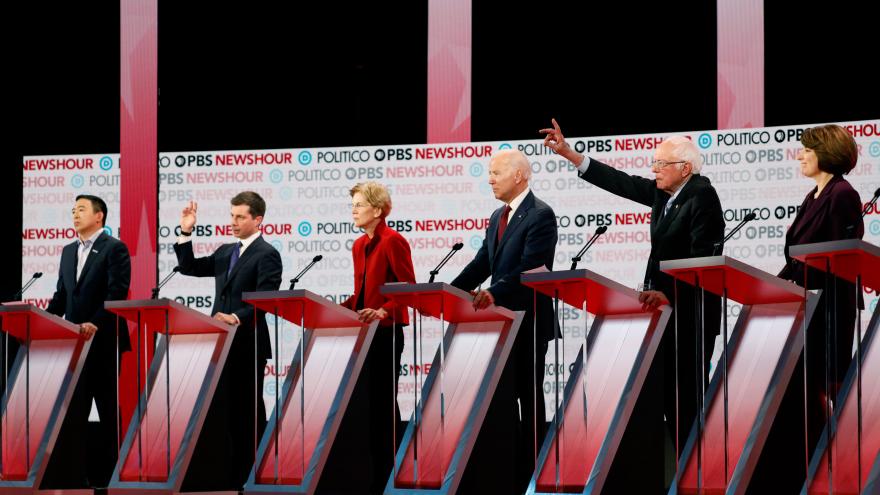 (CNN) -- The most consequential moment of the Iowa caucuses won't be the first time that people across the state line up in support of their preferred candidate on February 3.

It will be when they do it for the second time -- and it has the chance to give supporters of Amy Klobuchar and Andrew Yang an outsized amount of power.

A new rule implemented by the Iowa Democratic Party to streamline the caucus process has changed what is known as the realignment process, a uniquely Iowa moment where the supporters of a candidate who fails to reach a certain threshold are free agents in the middle of the caucus.

In caucuses past, everyone was able to realign, regardless of who they supported the first time. But the new rule means that only supporters of candidates who don't meet that threshold -- or "viability" -- will be allowed to pick another candidate the second time. That could mean that, upon realignment. people backing the current pack of front-runners -- Joe Biden, Pete Buttigieg, Bernie Sanders and Elizabeth Warren -- may be locked into their choices, while those who are behind candidates with less support -- Klobuchar and Yang -- are free to choose. Support from those free agents could make the difference between victory and a middling finish.

Troy Price, the chair of the Iowa Democratic Party, said that the party made the change, in part, because past realignment processes have taken hours and they have been rife with gamesmanship from other campaigns; supporters from certain campaigns would go to another campaign to deny yet another campaign the ability to grow their support or gain viability.

"We have known in years past the realignment process had taken a long time, sometimes hours," Price said. "In addition to that, it just cuts down on some of the games campaigns liked to play and gives a more accurate view of what happened in the room."

Breaking down the process

Here's how it will work: When an Iowa voter walks into a caucus site on February 3, they will be asked to line up with their preferred candidate. If that candidate fails to reach viability -- 15% of the number of people in the room in most caucus large sites, but anywhere between 18% to just over 50% in some of the smallest caucus sites -- the caucusgoer can either leave the caucus, decide to support another candidate who was viable or join with other non-viable people to make a candidate viable.

Once realignment happens, the heads of the caucus sites will count the newly formed groups and that number -- not the first -- will dictate how many delegates each candidate gets from each site and, eventually, the winner of the Iowa caucuses.

The realignment process, in many ways, becomes a social experiment, with neighbors pressuring neighbors to join their candidates. And the public nature of a caucus -- everyone sees who you are supporting -- means it all plays out in full view.

And the new rule stipulates that only Iowans who supported candidates on the first alignment who failed to reach that viability threshold can move during the realignment process, meaning if a voter backed Joe Biden in a certain caucus where the former Vice President reached viability, they cannot realign to support former South Bend Mayor Pete Buttigieg.

That's new -- in past caucuses, everyone was able to realign, meaning there was a larger group of people to woo and sway on caucus night.

Support, but just not enough

And that is where Klobuchar and Yang supporters come in.

Both candidates enjoy some support in Iowa -- Klobuchar was at 6% in the latest CNN/Des Moines Register poll, while Yang was at 5% - but both are widely seen across the state as the candidates who will most likely struggle to be viable in certain areas.

That means that their supporters will be prime targets during the realignment process. While support in the mid-single digits is far from overwhelming, it could be the difference between winning and finishing in the middle of the pack. Top tier candidates are already quietly talking to their precinct captains about how to tailor their message to each group.

Pastor Steven Broers, a Yang supporter and precinct captain in rural Fontanelle, said he hopes to be viable in his town and has already targeted what he believes will be the five Yang supporters he believes he needs to reach the 15% threshold. But Broers is just as aware that Yang may not reach viability and his job could become finding supporters from other non-viable group.

His tactic: Do you really want to lose Andrew Yang?

"If there is a huge turnout and we aren't viable, I am going to say, 'Did you watch the last debate? Who did you miss?'" Broers said, referencing the fact that Yang missed the January debate in Iowa. "If you want Andrew Yang to continue, to hear his message, than join us, because this is how we keep his message coming."

He added: "In the general election, you are going to be stuck voting for the Democratic candidate or Donald Trump. Now is the time say... whose message do you want to keep hearing from."

This process has Iowa Democrats closely watching which candidates are garnering the most consideration -- not necessarily support -- from likely caucus-goers. A recent CNN/Des Moines Register poll found this month that candidate could be Buttigieg, who 60% of likely caucusgoers said he was either their first or second choice or someone they were "actively considering," or Warren who was at 59%.

Jane Meyer, a 62-year old Buttigieg precinct captain in Northwest Des Moines, said she has told the mayor's supporters in her area to open any conversation during the realignment process with a simple comment: "We're sorry their candidate didn't make it because if we worked hard, they worked hard."

Then there are precinct captains like Rachel Phillips, a 40-year old Buttigieg precinct captain from the Des Moines area, who have started to think about the neighbors she knows plan to support people like Yang and Klobuchar.

"As part of our training, we've been taught to meet as many people in your precinct as possible. So, we have personal relationships with a lot of people who are in our precinct," she said. "Maybe somebody that we do have in Pete's corner may know that person who is going for Amy and may know things that are important to them. We are trying to form those personal relationships before caucus night."

A Sanders spokesman said they were confident that their "4-level precinct captain training" process in Iowa -- where the campaign's volunteer representatives are trained how to woo and win over support at all different levels of the caucus process -- "sets us up to not only win realignment in both large and small precincts."

The Sanders' campaign's goal: Have "fully trained volunteers in every single precinct in the state."

Klobuchar supporters are well aware of the fact that they will be some of the most targeted Iowans during the realignment process.

Barbara Wells, a Des Moines resident who recently decided to caucus for Klobuchar after weighing Buttigieg and Warren, said one reason she wants to back the Minnesota senator is because she wants to make sure she is viable and gets to move on past Iowa.

"In my precinct, I think Pete will probably win it, right? And so, if I can go over to Amy and make Amy viable, that would be really important to me because it keeps her in the race," said Wells.

The importance of realignment -- and the impact that a few percentage points could play on caucus night -- was made clear earlier this week when New Jersey Sen. Cory Booker ended his campaign.

Even though Booker's campaign had a small coalition of supporters in Iowa -- the recent CNN/Des Moines Register poll had him at 3% - campaigns across Iowa said that his supporters could be the difference.

So in the wake of Booker dropping out, all leading campaigns have told CNN that they had their organizers begin to go through their voter lists to find people who said they were committed to Booker but would consider supporting another candidate.

"A lot of his people were really invested in him personally," said a top Iowa Democrat, "and I imagine a lot will sit out for a while before making a decision."