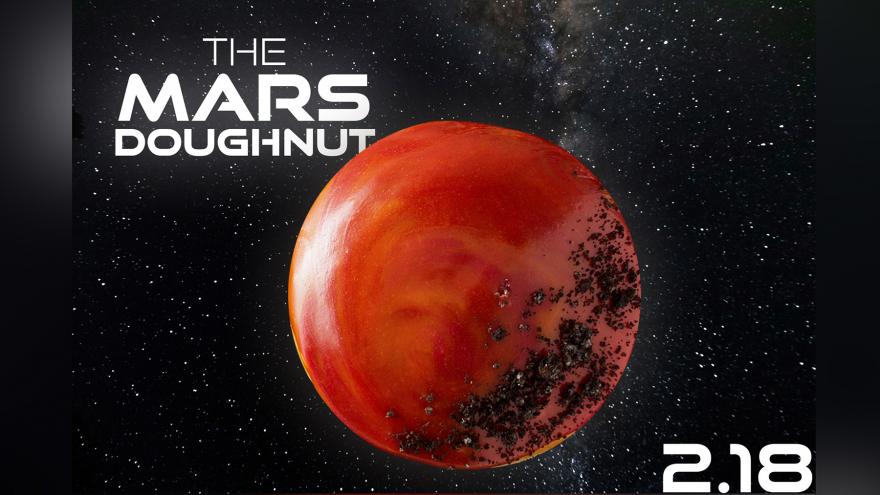 (CNN) -- When NASA's Perseverance rover goes through the "seven minutes of terror" to land itself on Mars February 18, you can sit back, watch the NASA coverage and relax.

It's not every day that NASA lands an SUV-size rover on Mars. The last rover to land on Mars was Curiosity in 2012; the stationary InSight lander touched down in 2018.

To mark the rare occasion, Krispy Kreme is offering a limited-edition themed doughnut -- only available on Thursday.

The Marsdoughnut will look like the red planet itself.

The caramel-dipped and chocolate cream-filled doughnut is topped with a swirl that resembles Mars, and it's even sprinkled with chocolate cookie crumbs for that authentic dusty Martian touch.

If you submitted your name during NASA's "Send Your Name to Mars" campaign, which put almost 11 million names on the rover before it departed for its journey to Mars, bring your "boarding pass" to Krispy Kreme and your Mars Doughnut is free.

"The landing of Perseverance on Mars will be an epic and important achievement," said Dave Skena, Krispy Kreme chief marketing officer, in a statement. "So, we're celebrating the best way we know how: with an amazing new doughnut discovery right here on earth."

Landing day: What to know

Perseverance, which is NASA's most sophisticated rover to date, is expected to land on the surface of Mars around 3:55 p.m. ET on Thursday.

The rover has been traveling through space since launching from Cape Canaveral, Florida, at the end of July. When it reaches Mars, Perseverance will have traveled 292.5 million miles on its journey from Earth.

Perseverance is NASA's first mission that will search for signs of ancient life on another planet to help answer the big question: Was life ever present on Mars?

The rover will explore Jezero Crater, the site of an ancient lake that existed 3.9 billion years ago, and search for microfossils in the rocks and soil there.

Along for the ride with Perseverance is an experiment to fly a helicopter, called Ingenuity, on another planet for the first time.

The team at NASA is inviting the world to tune in to its countdown and landing commentary, which will stream live beginning on Thursday at 2:15 p.m. ET. Tune in via NASA's public TV channel, website, app, YouTube, Twitter, Facebook, LinkedIn, Twitch, Daily Motion or THETA.TV. In a first, the agency will also offer a Spanish language show for the landing.

During the landing coverage, NASA's mission control team will be able to confirm if the rover safely landed on the surface of Mars.

Naturally, the rover has its own Twitter and Facebook accounts, where you can expect updates from the mission team from the perspective of the rover. And you can bet the Curiosity rover and InSight lander will be welcoming Perseverance to their home, the red planet.

The agency has fun ways to participate in the countdown excitement, like photo booths and activities for kids and students. You can also follow every step of the rover's landing through a NASA interactive or sign up for a virtual experience of the landing.