Kyle Rittenhouse breaks down crying while testifying in his homicide trial 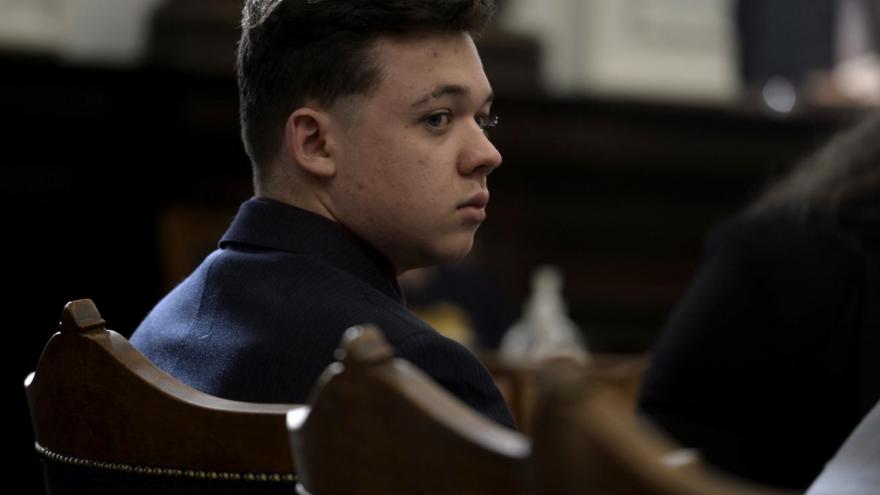 Kyle Rittenhouse listens as his lawyer gives opening statements to the jury at the Kenosha County Courthouse in Kenosha, Wis, on Nov. 2, 2021.

(CNN) -- Kyle Rittenhouse broke down crying Wednesday while testifying in his homicide trial about the moments before he fatally shot Joseph Rosenbaum in Kenosha, Wisconsin, last year, leading the judge to call for a short break in the case.

Rittenhouse, 18, began his testimony by telling jurors he is now studying nursing at Arizona State University. He testified that he had worked as a lifeguard in Kenosha, was part of a police explorer program and knows CPR and basic life support.

He lived in Antioch, Illinois, with his mother, and his father lived in Kenosha. He testified that he went into Kenosha on the morning of August 25, 2020, to clean up graffiti, and then again that night with a rifle and small medic kit and joined up with a group of armed people. "I went down there to provide first aid," he said. He said he did not go there looking for trouble.

Rittenhouse told jurors that Rosenbaum threatened to kill him twice that night. In one instance, Rosenbaum screamed, "if I catch any of you f***ers alone, I'll f***ing kill you," according to Rittenhouse.

At one point in the night, he became separated from the other armed people in his group. He walked toward a parking lot and said Rosenbaum, hiding behind a vehicle, "ambushed me." Rosenbaum began running at him and cornered him, he said -- and then Rittenhouse broke down into tears.

Jurors appeared attentive and some appeared to take extensive notes during his testimony, according to a pool reporter.

The testimony comes after the prosecution rested its case on Tuesday after calling 22 witnesses over six days. The prosecution's case was highlighted by testimony from an armed paramedic who was shot by Rittenhouse and a journalist who said the gunfire put him in danger.

Rittenhouse is the defense's seventh witness. Among them were two armed people who recounted Rittenhouse's stunned reaction after the shootings as well as testimony from people who captured some of the fiery unrest.

The trial's testimony has at times favored the prosecution's case that Rittenhouse committed five felonies and a misdemeanor in Kenosha on the night of August 25. Yet other evidence -- sometimes from the same witness -- has bolstered the defense's argument that Rittenhouse acted in self-defense when he opened fire.

The charges stem from the chaotic unrest in the wake of the Kenosha police shooting of Jacob Blake, a 29-year-old Black man. After instances of rioting and destruction, Rittenhouse, then 17, grabbed a medic kit and an AR-15-style rifle and joined up with a group of other armed people at a car dealership in Kenosha.

In a parking lot, Rittenhouse shot and killed Rosenbaum, who chased the teenager and threw a plastic bag at him. The teenager tried to flee the area, and a crowd pursued him down the street. Rittenhouse fell to the ground and shot at three other people who confronted him.

He fired his rifle eight times in all: four times at Rosenbaum; twice at an unknown person who tried to kick him; once at Anthony Huber, who had hit him with a skateboard; and once at Gaige Grosskreutz, who was armed with a gun. Rosenbaum, 36, and Huber, 26, were killed, and Grosskreutz was wounded.

The events of that night, almost all captured on video, are hardly in dispute. The question before the jury is whether Rittenhouse's actions are to be considered reasonable.

While the prosecution has sought to show Rittenhouse as a criminal gunman, defense attorney Mark Richards said Rittenhouse fired only in self-defense. In opening statements, he described Rosenbaum as the aggressor in the initial shooting and said Huber and Grosskreutz were part of a mob who "attacked him in the street like an animal."

After Grosskreutz was shot by Rittenhouse in the arm, the paramedic's former roommate Jacob Marshall visited him in the hospital and posted a photo of the two together. In the comments, he wrote that Grosskreutz had said "his only regret was not killing the kid."

But under oath in court on Wednesday, Marshall testified that he had made up those words and that Grosskreutz had not actually said that.

He did so "out of pure anger" and in an attempt to stick up for his friend, he said.

In his testimony Monday, Grosskreutz said he pursued Rittenhouse because he believed the teen was an active shooter. He admitted that he pointed his gun at Rittenhouse but said he did not do so intentionally and "was never trying to kill the defendant."

Four witnesses testified for the defense on Tuesday after the prosecution rested its case.

Nicholas Smith, the defense's first witness, testified that he was on the roof of the car dealership with a group of armed people when he heard gunshots. He testified that he saw Rittenhouse sweating and pale shortly afterward.

"He repeats, 'I just shot someone,' over and over, and I believe at some point he did say he had to shoot someone," Smith said.

JoAnn Fiedler, an armed woman who traveled from West Bend to Kenosha the night of the shootings, similarly testified that Rittenhouse was pale, shaking and stammering his words after the shootings. She described Rittenhouse "pulling his hair back and pulling it back really hard and just, his comment was, 'my God, my life might be over' and just, we're just like, 'OK, calm down.'"

Nathan DeBruin, a freelance photojournalist, testified about some of the fiery unrest and destruction that he saw in Kenosha last year.

Finally, Lucas Zanin testified that he was across the street from a parking lot in Kenosha and saw people destroying vehicles. The defense played for jurors video of that destruction, which was filmed by Zanin's stepdaughter.