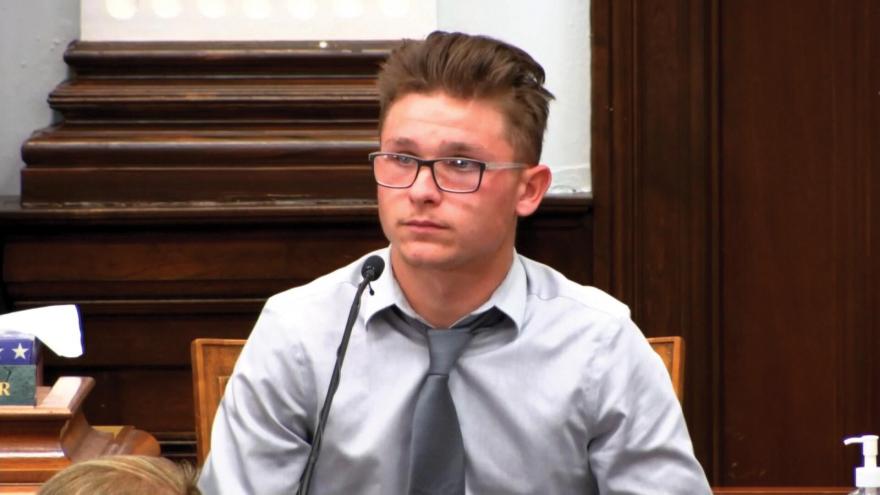 Kyle Rittenhouse's criminal trial is set to resume on November 3. Dominick Black, testified that he bought a gun for Rittenhouse.

(CNN) -- Jurors in Kyle Rittenhouse's criminal trial on Wednesday were shown video taken in Kenosha, Wisconsin, last August in which they heard the fatal shots that the teenager fired at Joseph Rosenbaum -- as well as a single gunshot by another man seconds earlier.

Both the prosecution and defense agreed that the initial shot was fired by Joshua Ziminski, a figure likely to take a prominent role in the trial. Ziminski, 36, has been charged with disorderly conduct using a dangerous weapon, arson and obstructing an officer, and he has pleaded not guilty, court records show. A criminal complaint says he and his wife admitted to firing a "warning shot" in the air that night.

The video was played in court Wednesday during testimony from Koerri Washington, who live-streamed the unrest in Kenosha last August. The shooting itself is not visible in that video.

Washington, who described himself as a "self-employed social media influencer," testified that Rosenbaum had been acting "erratic" on the night of August 25, 2020, and that Rittenhouse was chain smoking and appeared nervous.

In cross-examination, defense attorney Corey Chirafisi displayed for jurors videos and photos of fires and destruction in Kenosha during the volatile period.

In opening statements, the prosecution said evidence would show Rittenhouse, 17 at the time, chased down and fatally shot Rosenbaum, 36, and then shot at three other people who tried to confront what they believed to be an active shooter.

However, Rittenhouse's defense attorney Mark Richards said Rosenbaum had been the aggressor that night and described the others as part of a "mob."

"He acted in self-defense, ladies and gentlemen," Richards told the jury. "The evidence will show his actions ... were reasonable under the circumstances as they existed that night, being attacked by Mr. Rosenbaum."

The trial will feature a bevy of video showing Rittenhouse's movements that night, including infrared video filmed from above Kenosha. Most of the facts of what happened that night are not up for debate -- rather, the heart of the trial is the analysis of Rittenhouse's actions and whether they can be considered "reasonable."

The violence in Kenosha, a city of about 100,000 people, came amid a tense summer of protests and unrest as masses of people denounced how American police treated Black people. On August 23, 2020, a Kenosha Police officer shot Jacob Blake, a 29-year-old Black man, multiple times in the back. The ensuing public anger led to incidents of violence and destruction that night and the next night, pushing some people to arm themselves and take the community's safety into their own hands.

Rittenhouse fired an AR-15-style weapon eight times in all during the unrest: four shots at Rosenbaum, who was unarmed; two shots at an unarmed unknown individual who kicked Rittenhouse; one fatal shot at Anthony Huber, who hit Rittenhouse with a skateboard; and one shot at Gaige Grosskreutz, who was holding a gun, according to prosecutors.

Rosenbaum and Huber, 26, were killed, and Grosskreutz, now 27, was wounded.

Dominick Black, a 20-year-old friend who was dating Rittenhouse's sister, testified Tuesday as the first witness in the trial and said he had previously purchased an AR-15 firearm for Rittenhouse in what prosecutors called a "straw purchase."

Rittenhouse was too young to purchase and possess a gun, but he gave Black funds to buy the firearm, Black testified.

On August 25, 2020, Black and Rittenhouse each took a weapon and ammo and went to downtown Kenosha to try to protect a car dealership called Car Source, where about six or seven other armed people had gathered. Black climbed atop the roof of the dealership that night because he felt being on the ground was too dangerous, he testified.

At one point, he heard gunshots go off in the distance at an area where Rittenhouse was.

"I didn't believe the gunshots were actually his until I got a phone call. I answered it and he just said, 'I shot somebody, I shot somebody,' and then hung up right away," Black testified.

Rittenhouse returned to the dealership "freaking out," pale and sweaty, Black said. They left Kenosha and drove to Rittenhouse's home in Antioch, and Rittenhouse surrendered to police the next morning.

Black has been charged with two counts of intentionally giving a dangerous weapon to a person under the age of 18 causing death, according to court records. He has pleaded not guilty. He testified Tuesday that he hoped taking the stand would lead to leniency in his case.

Also on Tuesday, an FBI agent testified about aerial surveillance of the unrest.

Prosecutors said infrared surveillance video could show that, at least at some point during that night, it was Rittenhouse who was following and chasing Rosenbaum. With FBI agent Brandon Cramin on the stand, prosecutors played grainy black-and-white video taken from an airplane 8,500 feet over Kenosha.

None of the fuzzy figures on the ground were immediately identifiable, according to pool reports. After Judge Bruce Schroeder and the attorneys discussed the video, the judge advised prosecutors to skip the FBI agent for now, call different witnesses and come back to the issue of the plane later.