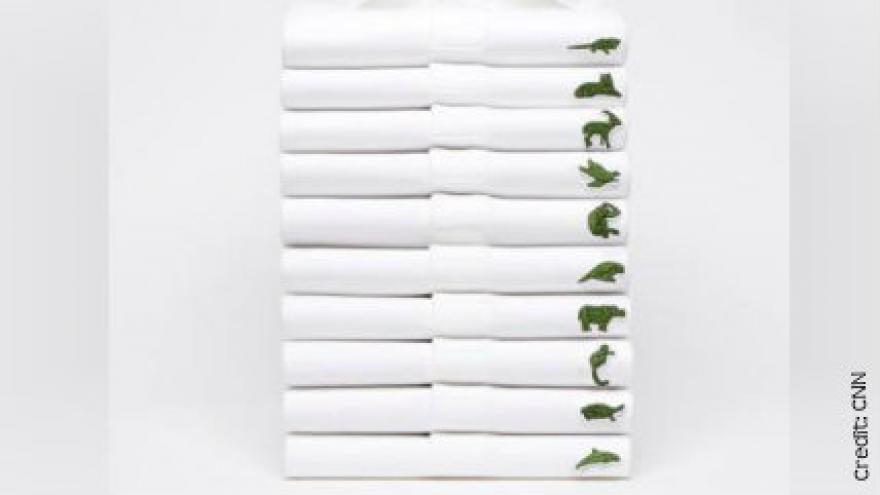 (CNN) -- Lacoste temporarily replaced its polo shirts' crocodile logo with the images of 10 endangered species to help counter the threat of extinction.

The shirts, which are part of a limited run supporting the "Save Our Species" campaign that launched during Paris Fashion Week on March 1, have sold out.

Replacing the crocodile above the left breast of the shirt are the Gulf of California porpoise, the Burmese roofed turtle, Sumatran tiger, the Anegada ground iguana and the northern sportive lemur, among others.

The French clothing company calibrated the number of shirts produced for each series to the population of the remaining animals in the wild. Of the 1,775 shirts available, the Gulf of California porpoise had the smallest print run, with just 30 shirts available.

The Anegada iguana, by contrast, was the most available, with 450 editions. Proceeds went to International Union for Conservation of Nature, an international advocacy organization working to protect nature that sponsored the campaign.

"Together these rare reptiles, birds and mammals champion the plight of all known threatened species," IUCN said in a statement.

The US Fish & Wildlife Service has placed 1,459 animals on its threatened and endangered list.

Wildlife expert Jeff Corwin lauded Lacoste's efforts and said he hoped it would inspire other companies to take on similar projects.

"It's a great start and I'm hoping it's just the beginning and inspires other companies to follow suit," Corwin told CNN. "Maybe Jaguar will do something for jaguars. Ram trucks maybe will start protecting big horn sheep."

"Generating awareness is equally important to fundraising because in order to solve the problem you need to understand the challenges," he added.

Lacoste's crocodile logo was introduced in 1936, and the company has never before sold shirts featuring other animals.