Lake Titicaca's endangered 'scrotum frog' could be on its last legs. Scientists hope to change that 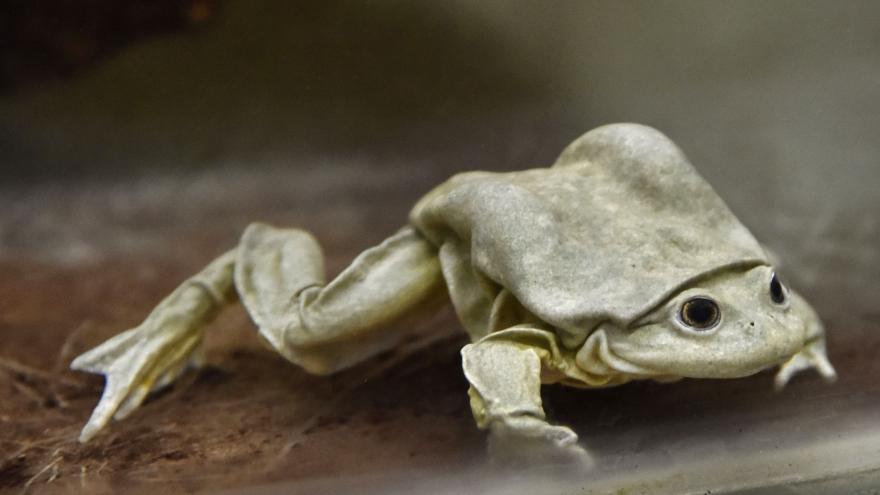 (CNN) -- A group of international scientists are joining forces to save an unusual endangered species -- the so-called "scrotum frog."

The frogs -- whose scientific name is Telmatobius culeus -- primarily live near Lake Titicaca, which straddles more than 3,200 square miles across the border of Peru and Bolivia, over 3,779 meters (12,400 feet) above sea level. They're the world's largest entirely acquatic frog, and their loose skin creates folds and flaps -- which earned the species its unfortunate nickname.

The frogs, which can grow up to 20 centimeters (8 inches) long from head to rump, are considered endangered due to over-harvesting for human consumption, invasive trout that feed on its tadpoles, and the destruction of their natural habitat.

It's hard to estimate how many frogs are left, given Lake Titicaca's vast size and the multitude of habitats it contains. But authorities and conservationists around the world have been worried for years about the frogs' decline. The population fell by 80% from 1994 to 2004, according to the International Union for Conservation of Nature (IUCN).

Since then, the condition of the lake has only worsened, and will likely continue to deteriorate, said IUCN. In some areas of the lake on the Bolivian side, more than 90% of the population may have disappeared.

Now, a number of scientific and wildlife institutions are launching a project to preserve the remaining frogs.

Participants include experts in veterinary medicine, biology, and conservation, who hail from Bolivia, Peru, Ecuador and the United States. The project, announced on Sunday by Bolivia's Natural History Museum, will allow researchers to study the frogs' underwater habitats, and evaluate their population status and genetics.

The project is backed by the Peruvian and Bolivian governments, who have "the same mission: promote the conservation of the Lake Titicaca Giant Frog," said the statement. It's also supported by the United Nations Development Program and the Global Environment Facility.

The frogs are an ecologically important species in Lake Titicaca, also called an "indicator species," meaning it helps authorities measure the health of the ecosystem, and of other species around it.

However, there aren't enough consistent surveys around the lake, and many surveys use different techniques at different times of the year -- meaning it's difficult to accurately measure population sizes and the rate of decline. Due to this data uncertainty, the IUCN revised the species' threat level to from "critically endangered" to "endangered" in 2019, calling it a "precautionary approach."

The population decline made headlines in 2016, when more than 10,000 of the frogs died suddenly. Nobody knew exactly why they were dying in such large numbers, but authorities noticed sludge and solid waste during an investigation, and local media reported that sewage runoff may have played a role in the deaths.

Denver Zoo specialists worked with Peruvian authorities to investigate the mass die-off. The Denver Zoo, which acquired a small population of the frogs that year, is the only North American institution to have them -- and a year later, the frogs hatched roughly 200 tadpoles at the zoo, the first time Titicaca frogs have ever hatched in North America.

Denver Zoo is among the institutions involved in this new conservation research project.