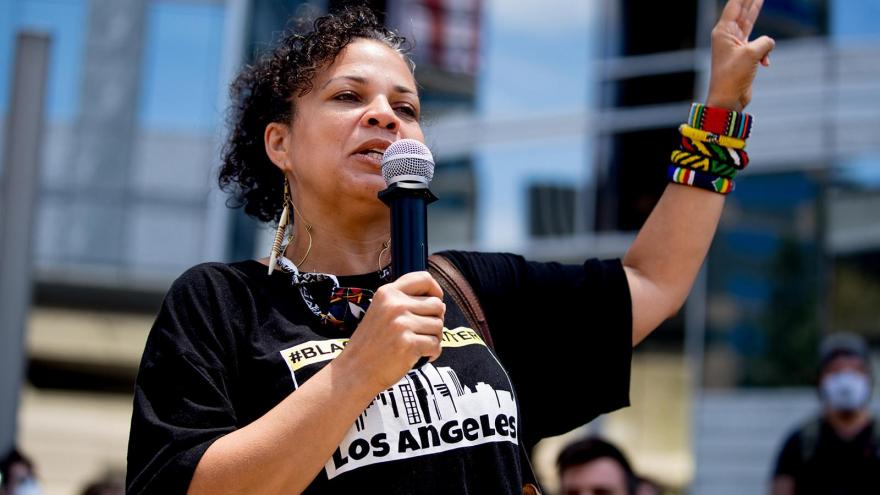 Melina Abdullah is the co-founder of Black Lives Matter Los Angeles. The Los Angeles Police Department (LAPD) is investigating a possible swatting incident after heavily armed officers were called to her home.

(CNN) -- The Los Angeles Police Department (LAPD) is investigating a possible swatting incident after heavily armed officers were called to the home of a prominent Black Lives Matter activist on Wednesday morning.

An LAPD spokesperson tells CNN that officers responded to a call of a reported kidnapping at Melina Abdullah's home at 8:53 a.m. PT on Wednesday. The call, however, appears to have been a swatting and is under investigation, the spokesperson said.

Swatting is a dangerous prank call made to authorities with the express purpose of luring them to a location where they are led to believe a horrific crime has been committed or is in progress.

"We were called to this location that there is a male in there holding you guys hostage and he wants $1 million or he's going to kill you within an hour," an officer standing outside her home could be heard saying on the video. "We just want to make sure you're OK."

Later, the video was no longer available on her account.

Abdullah said after the incident she doesn't believe that police actually received a 911 call reporting a kidnapping at her home, calling the claim "cockamamie."

"My house was surrounded by LAPD this morning. We had assault rifles drawn on me and my three children and they came up with some cockamamie story about, they got a call that the people in this residence are being held hostage. We know that's not true," Abdullah said at a previously planned news conference at Cal State L.A. "We don't even believe they got that call. We believe it's yet another tactic that's being used to block us from ushering in black freedom."

Abdullah did not immediately respond to a CNN request for comment.

Los Angeles City Council President Herb Wesson Jr. called for an investigation into what he said appeared to be a swatting incident. Wesson tweeted that Abdullah "is the mother of three children and to put her family through this is unacceptable, no matter where your politics may lie."