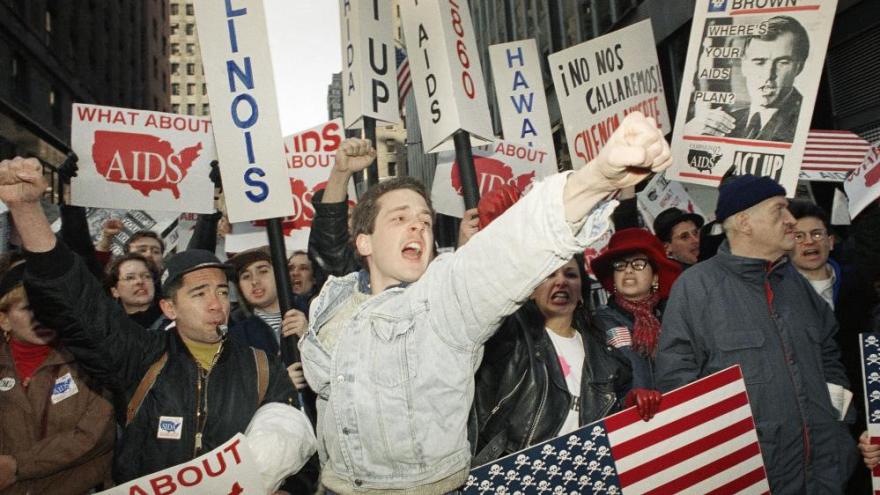 Members of the gay activist group ACT-UP march through Times Square in New York on April 6, 1992.

(CNN) -- In the early 1980s, a little understood disease called AIDS was stigmatized as society turned its head away from the hundreds of gay men it was killing. But then Larry Kramer published his essay "1,112 and Counting."

"If this article doesn't rouse you to anger, fury, rage and action, gay men have no future on this earth," Kramer wrote. "Unless we fight for our lives we shall die."

With that one essay, Kramer helped shift the nation's attention to the spread of AIDS, and his continued activism, while often divisive, helped propel the US to respond to the crisis in the way it did.

That game changer, who many credit as saving thousands of lives affected by the disease, died Wednesday in New York.

"Larry made a huge contribution to our world as an activist but also as a writer," said Schwalbe, who had known Kramer for 57 years. "I believe that his plays and novels, from 'The Normal Heart' to 'The American People' will more than stand the test of time."

He brought AIDS to the forefront

Kramer, an Oscar-nominated screenwriter for the 1969 film "Women in Love," further brought the AIDS epidemic to the public eye with his semi-autobiographical play "The Normal Heart," which focused on the rise of the AIDS crisis in New York and was later adapted into an HBO film in 2014.

He was one of the first activists in the fight against AIDS, and in 1982, he co-founded the Gay Men's Health Crisis, a leading provider of HIV/AIDS prevention, care and advocacy.

Kramer was ousted from the group a year later after his accusatory rhetoric caused a riff within the group, but in 1987, he helped found ACT UP (AIDS Coalition to Unlease Power), a more extreme organization that performed demonstrations, die-ins, political funerals and speeches against government officials, religious leaders and Wall Street to speed up AIDS research and advocate for the LGBTQ community.

"Rest in power to our fighter Larry Kramer. Your rage helped inspire a movement. We will keep honoring your name and spirit with action," ACT UP NY tweeted Wednesday.

Kramer himself was HIV positive, according to a 2002 interview with PBS.

His anger led to action

Kramer didn't make the impact that he did by sugar-coating things. He was known for his brash and aggressive tactics. In his essay "1,112 and Counting," he blamed New York City Mayor Ed Koch for being apathetic toward AIDS patients.

Once, Kramer had encountered Koch in the lobby of the apartment building where they both lived. Koch reached down to pet his dog Molly but Kramer yanked her away.

"I said, 'Molly, you can't talk to him. That is the man who killed all of Daddy's friends," Kramer told the New Yorker in 2002.

His relationship with Anthony Fauci, director of the National Institute of Allergy and Infectious Diseases at the National institutes of Health, was even more hostile. In 1988, Kramer wrote an open letter in the San Francisco Examiner, calling Fauci a "murderer" and saying that he was being inactive in his response to the AIDS epidemic.

Despite his harsh criticism of Fauci, the two later became friends and Fauci even credited Kramer and other ACT UP activists for speeding up the process in which government agencies test drugs.

"There is no question in my mind that Larry helped change medicine in this country," Fauci, who now heads the nation's response against the coronavirus pandemic, told the New Yorker in 2002.

A trailblazer for the LGBTQ community

While Kramer may be known for his AIDS activism, many in the LGBTQ community credit him for leading the way to live proudly as gay.

"I met Larry Kramer when I was 18 or 19 & did a reading of his play The Destiny of Me," actor Anthony Rapp from "Rent" tweeted. "Getting to converse with him & soak up some of his incredible energy was galvanizing, & was one of the main reasons I then chose to live my life as a publicly out actor at a time when few did."

"God Bless You, Larry Kramer," Andy Cohen tweeted. "Everyone in the LGBTQ community owes you a debt of gratitude."